Even children deal with Impostor Syndrome, characterized by feelings of fraudulence and inadequacy. Here’s how to identify and derail Impostor Syndrome in your highly sensitive, gifted child.

My daughter left a pile of ripped paper on the dining room table.

It started out as a picture of Eevee, the Pokemon. I thought it was darling and told her so.

She smiled, but glanced across the table at her sister‘s drawing.

Then she let out a wail of frustration and ripped Eevee to shreds. 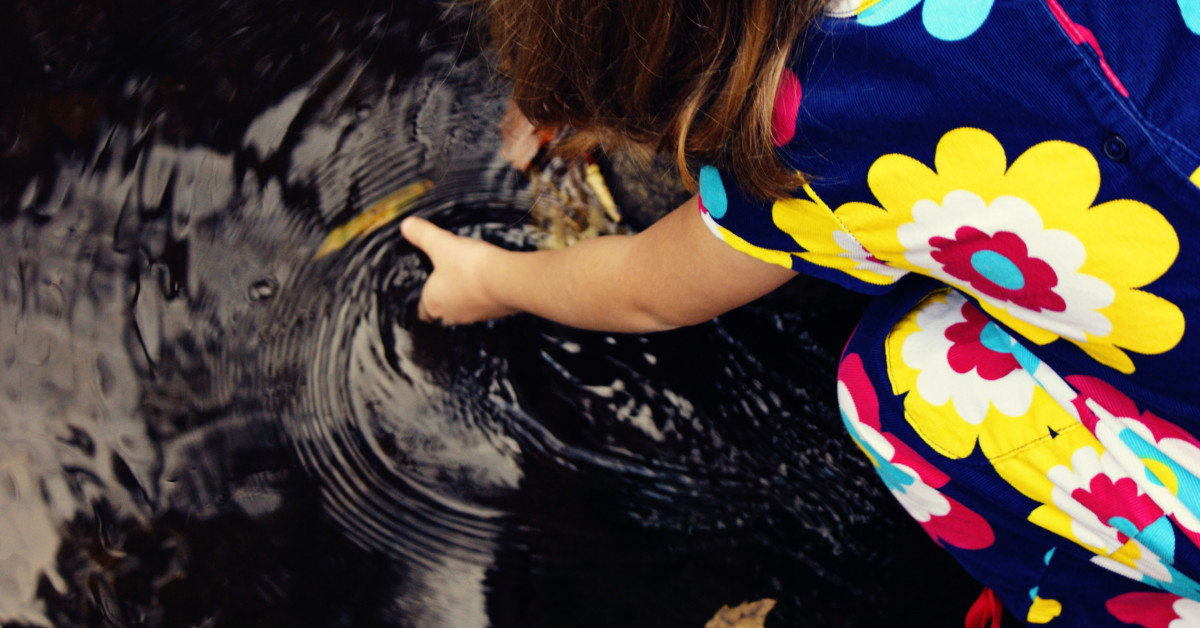 All three of my children are gifted.  My oldest is the absent-minded professor, brilliant and intensely focused to the exclusion of human interaction. My youngest is the wunderkind, beginning reading and simple math at two (when he’s not eating playground bark, that is).

And then there is my B, saddled in the middle of the group. She is sensitive, charismatic, and wise beyond her years.

B is a highly gifted empath. She gets people. I first noticed it when she was two and a half: B observed, identified, and correctly analyzed an emotional exchange between a mother and her toddler daughter – from several yards away.

This insightful awareness is a blessing and a curse. While B can engage anyone at any time, she will also internalize others’ feelings and emotions. It becomes an inward battle: her self-worth is contingent upon what other people are feeling.

And frequently, what other people are feeling is not enough to convince her of her talents.

In many ways, B is just like me. For much of my life, I’ve absorbed and internalized other people’s emotions. As an adult, this means I’m in constant fear of being found out. I struggle with Impostor Syndrome: feelings of fraudulence and inadequacy that exist despite overwhelming evidence to the contrary.

Impostor Syndrome is my constant companion, and now it’s enamored with my daughter.

Before I knew what I felt had a name, I convinced myself it was low self-esteem. But the work of psychologists Pauline Clance and Suzanne Imes changed all that.

In 1978, Clance and Imes noted an unusual number of gifted, high achieving individuals who believed themselves unworthy of success. They saw their achievements as either born out of luck or accomplished tangentially through someone else’s merits. Clance and Imes identified several characteristics common to the group as a whole, then coined the phenomenon the Impostor Syndrome. The psychologists noted it is different from low self-esteem’s global inadequacy: Impostors only experience emotions of fraudulence in the fields in which they excel.

While Clance and Imes focused primarily on adults, Impostor Syndrome isn’t age specific. It also manifests in children and teens, especially in gifted, highly sensitive perfectionists like my sweet girl B. The kicker, though, is the signs of Impostor Syndrome in children can look more like behavioral problems than psychological challenges. If you didn’t know any better, it can be easy to write kids off as obnoxious, bratty, or aloof.

That’s why I’ve compiled four signs your child may have Impostor Syndrome.

I’m not a doctor or psychologist, but I have noted these characteristics in my daughter and in former students I’ve had the privilege to teach.

Children with Impostor Syndrome are angry. We’ve had objects thrown, pencils snapped, people hurt (unintentionally, of course), and screams so loud they can be heard from outside. It’s hard to express the fear you might somehow be inadequate, so the concerns and frustrations of impostor children often manifest in violent outbursts.

Children with Impostor Syndrome are anxious. What if I’m found out? What if they see me as less than?An anxious impostor will fixate on these thoughts to the point of developing physical symptoms – unexplained stomach and headaches are among the most common complaints.  l

Children with Impostor Syndrome have a strong desire to be the best, generally at any cost. In our house, boardgames end in tantrums; performances fall apart in refusal. This characteristic complicates learning in group settings, as the fear of appearing weak can prevent children from admitting they need help.

Children with impostor syndrome are highly self-critical. They might insist they are unable to perform tasks they have clearly already mastered. You might hear a frequent refrain of “I’m stupid. I’m horrible. I can’t do this,” even though you know she can.

Impostor Syndrome in your child may seem devastating, but it is beatable if you know what to do.

When you praise your child, focus on specific areas in which your child excels. Use phrases that highlight certain achievements, such as, “You’ve totally rocked this long division!” Concrete affirmations are more valuable to a child’s sense of self-worth.

It’s super frustrating when a child resists activities in which he excels. However, forcing the issue will only cause further anxiety and frustration. While you will need to provide encouragement on the days he feels down, offer it as gently as you can. It will be much more effective in moving past the paralysis of inadequacy than trying to force a way out.

Find a supportive community or mentor

In some instances, impostor children feel more comfortable with teens and adults. If that’s the case, find a mentor with whom your child can connect.  This will help normalize her feelings of “otherness” and provide her with a sense of community.

Keep concrete reminders of success. When a child experiences feelings of an inadequacy, it helps to remind her of her own accomplishments.  Review mementos of past successes to encourage future achievements, and work to foster an attitude of grit instead of loss. 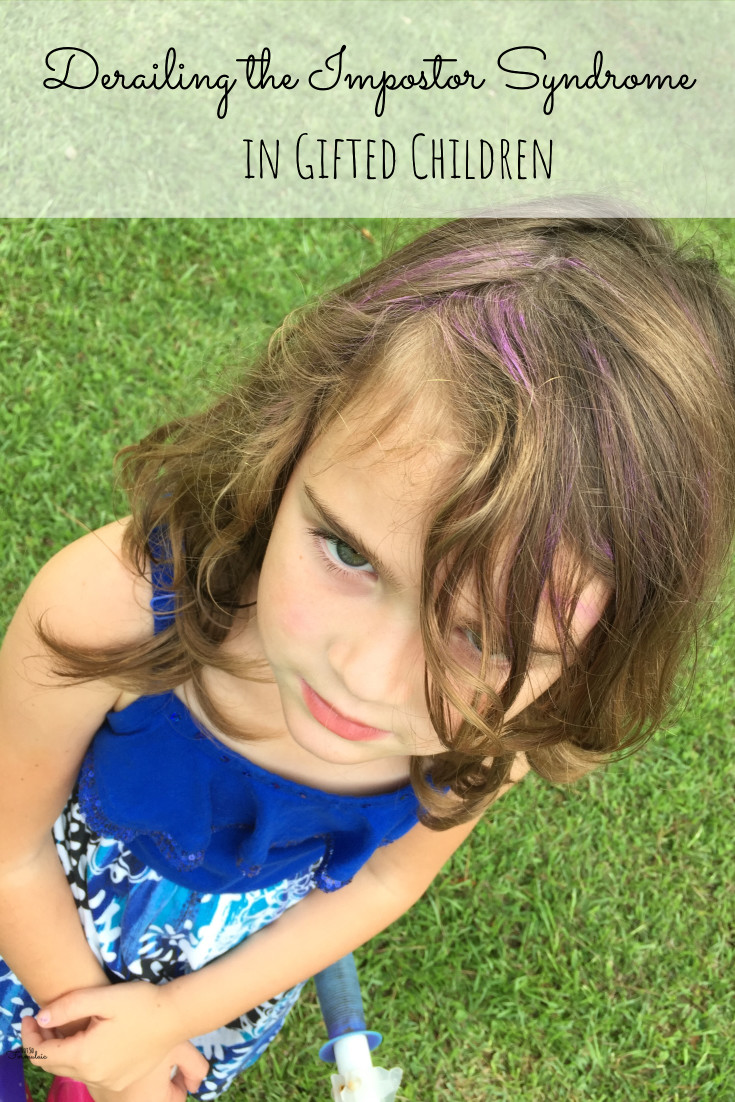 It’s not easy to watch a child doubt herself. I wish I could have saved B from the inadequacy and worthlessness she felt as she destroyed her sweet creation. My heart aches for her – not only as her mother, but as a gifted woman who sees herself as inadequate, too (so much so that even writing that sentence makes me question my own abilities).

Her pile of torn paper remains on the dining room table, a silent sentinel of anger and frustration. I haven’t had the heart to touch it; I want her to know she’s not alone.

And yes, I’m still working on it.

So when she comes home from co-op, I will hug her, love her, and ask her to help me clean it.

Then we’ll sit down and draw another Eevee – together.