Imagination matters, even in the elementary-age child. Here are 3 simple ways to ignite the spark and set fire to creative thinking.

We see it in classic literature and films all the time: kids grow up, and suddenly they’ve lost all connection to the world of imagination.

Those authors and screenwriters had never met Dr. Brandt. 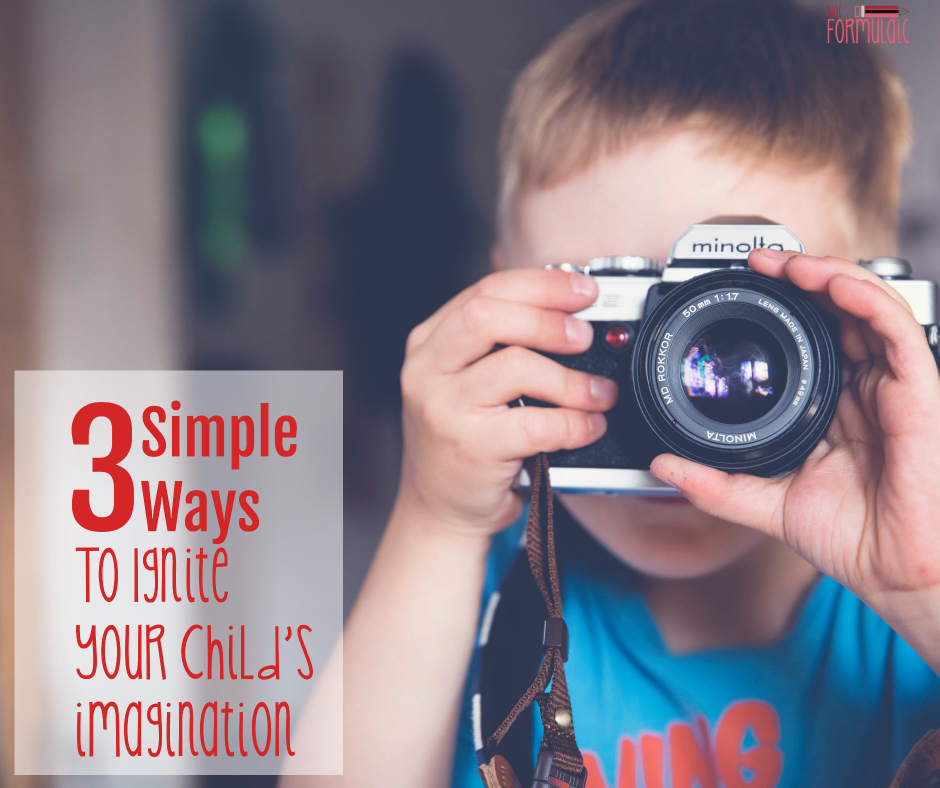 My undergraduate degree is in secondary education, and Dr. Brandt was my flagship professor. He was a giant teddy bear of a man in flat front khakis, blue oxford button downs, and signature red silk ties. Class with Dr. Brandt was an adventure: he viewed education as a conduit for creativity and his teachers as the guardian of that elusive, golden gate.

That model wasn’t missing from his lectures, either, as each day’s class began with a musical selection from classic rock. He treated us to The Beatles, The Stones, Velvet Underground – we had as much a musical education as we did training in pre-service teaching. But out of the dozens of artists and titles he introduced us to, there was one song Dr. Brandt insisted we remember forever: it was Flowers Are Red by Harry Chapin, a 7.5-minute epic more morality tale than a rock song.

Chapin’s folksong tells the story of a little boy crushed into conformity by his hardline teacher. The teacher shames the child for drawing flowers in a rainbow of colors, and the boy eventually caves to the pressure, embracing a world as grey and forlorn as the one his teacher aspires to create.

Dr. Brandt believed that traditional education had killed creativity. Decades in the profession had made that abundantly clear. He was tired of school districts churning out mindless automatons. As his students, we were expected to turn the tide.

It’s true what Paul says in Corinthians: as we grow older we put away childish things. But imagination and creativity aren’t childish, and we do a disservice to older children, especially, when we discourage them from engaging in imaginary play. Continued exposure to creative play into upper elementary school offers several benefits, helping our children grow into thoughtful, hardworking, innovative adults.

The Practical Benefits of Imagination

Children remain relatively self-centered even into elementary. While the ability to see, recognize, understand, and identify with what someone else is feeling becomes easier with age, perfecting the art requires practice. When a child has an active imaginary life, it becomes easier to imagine how another person might feel.

I see this in my oldest daughter quite readily. She’s a twice exceptional child with a heavy dose of socially asynchronous development. For the past 18 months, G and her sister, B, have played an imaginary game called “The Mix Game.” It encompasses characters, scenes, and plot lines from books they’ve read, movies they’ve seen, and even television shows they’ve watched on occasion. The constant mixing and melding of characters from different backgrounds and perspectives has helped my oldest daughter sharpen her empathy skills: she must consider how characters like Rey from The Force Awakens might feel meeting Obi-Wan from Episode IV. It has carried over into her relationships, and she is better able to relate to her peers.

The phrase growth mindset sets my teeth on edge, but the concept behind it – resilience – is one I want to instill in my kids. Generally, my children grab on like a bulldog to quests for ice cream or a later bedtime. But working through that set of math problems?


I’ve noticed, though, that my kids persevere more readily after they’ve worked through a saga in their imaginary game. A few paltry math problems are no match for my girls after they’ve saved an entire wolfpack from the clutches of Lord Voldemort.

I had several takeaways from my years in the classroom, but chief among them was the realization my students would shut down rather than buckle down and problem solve in a difficult situation. It was eternally frustrating and utterly depressing. Why couldn’t these kids find a way out?

Truthfully I blame it on their education, one which emphasized standardized tests over problem-solving skills. When we encourage imaginary play in the elementary and middle school years, though, it fosters a hefty set of critical thinking capabilities that dovetails nicely with the onset of metacognition – thinking about one’s own thought processes.As metacognition develops, children question the why in addition to the how. They recognize discrepancies in patterns of behavior, and imaginary play provides a safe space to work through that puzzle. 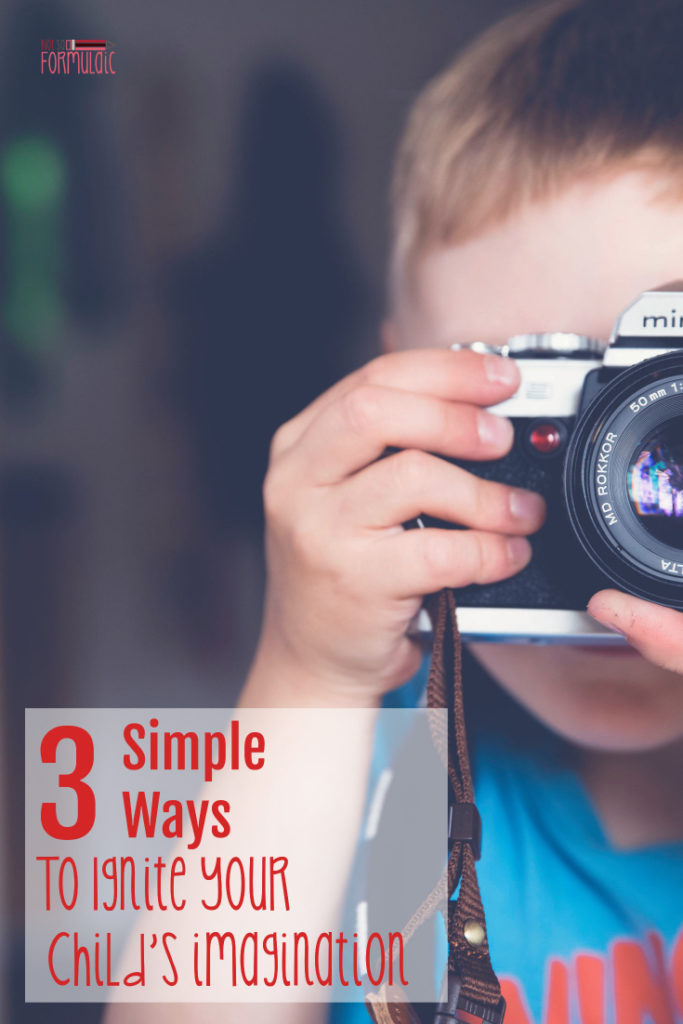 It’s clear that imaginary play provides older children with a number of benefits. Why, then, do we find it downplayed and ignored?

I think the main reason is peer pressure in a culture where conformity is the norm. Nobody wants to be the weird kid: creatives float on the margin of classroom society. It’s easier to fit in than be true to oneself. If we want our children to embrace imagination, to celebrate their creativity instead of hiding it as they grow, we need to take active steps to encourage it.

Talk to your child. Read together, ask questions, and discuss. Model wondering aloud about imaginative topics, like the following:

What would happen if the trees turned into candy?

Where would you go if you could travel the world?

Which historical figure would love to have for dinner? Why?

Boredom is not a bad thing – it’s an opportunity to discover and explore. Place a hold on screens and devices and leave out resources for creative play, from Magna Tiles and Legos to puppets and Story Cubes.

Nothing stokes the fire of imagination like bouncing ideas off of someone else. Work together with your child to create and explore, trying your hand at activities like reader’s theater, collaborative writing, or writing in a family notebook.

But they are also blue and pink and yellow and white. There is so much in our world to discover and explore, to build and create. Let’s raise a generation of creative, innovative thinkers. It’s absolutely not too late.

Bonus! Are you looking for boredom busting ideas? Here’s a list of 16 life skills activities that won’t just inspire the imagination – they’ll teach valuable skills for children, too.

Learn to Grow Your Own Food

Teach Your Kids to Do the Laundry

Teach them to Plan a Menu

Help Them Learn How to Shop at the Grocery Store

Take a Spin through the Farmer’s Market

Bake a Yeast or Quick Bread

Do Some Kid-Friendly Maintenance on Your Car

Can, Freeze, and Preserve Fruits and Vegetables

Teach Your Kids to Have a Meaningful Conversation

Teach them to Prepare a Simple Meal

Teach Them to Manage Their Time and Set Goals

Have a Screen-Free Summer with Life Skills Bingo