Got a Strong-Willed Girl? There’s a saint for that, plus a whole lot of beauty in being stubborn for the grace of God. (And if you’re looking for the perfect patron saint for your kiddo, I’ve got a toolkit just for you!)

This post contains affiliate links. I earn a small commission from the sale of items made via these links.

Earlier this afternoon, my daughter found a truck tire submerged in our neighborhood creek. It didn’t stay there for long: 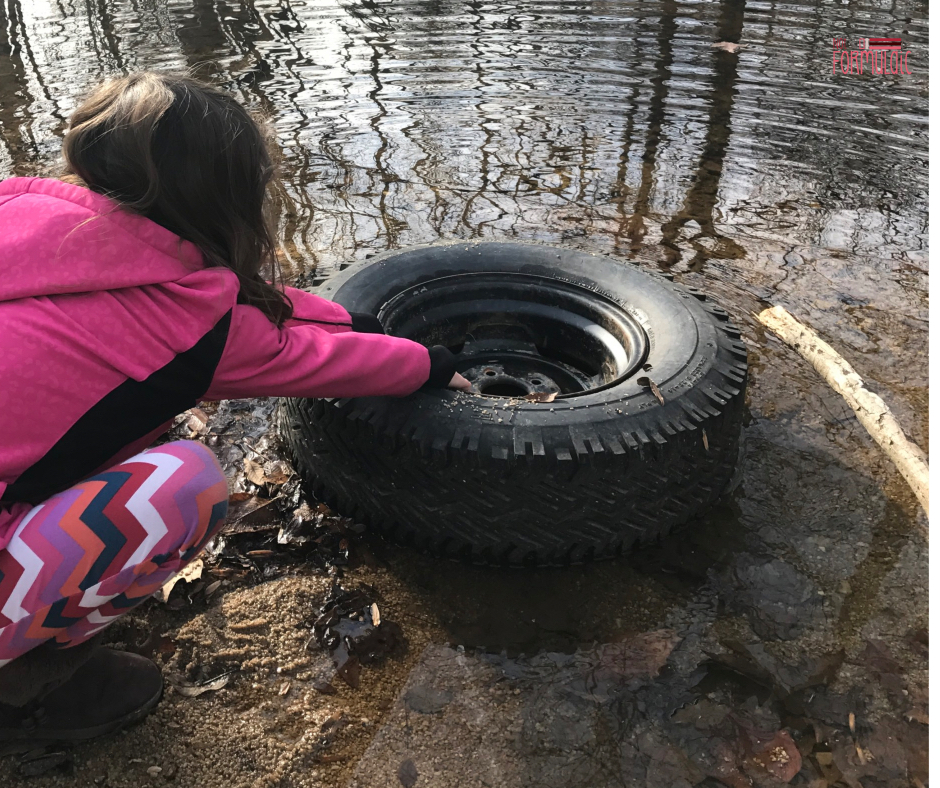 I begged her. Pleaded with her. Asked her multiple times, not politely, TO LEAVE THE THING IN THE CREEK.

She wasn’t dressed for wading; she wouldn’t hear that rubber takes forever to break down. My girl wanted that heavy thing out of her creek, so she huffed, and she puffed, and she pulled the tire right out.

“There you go, Mom,” she said, wiping her sandy palms on my jeans. “Now you can take it up to the trash.” 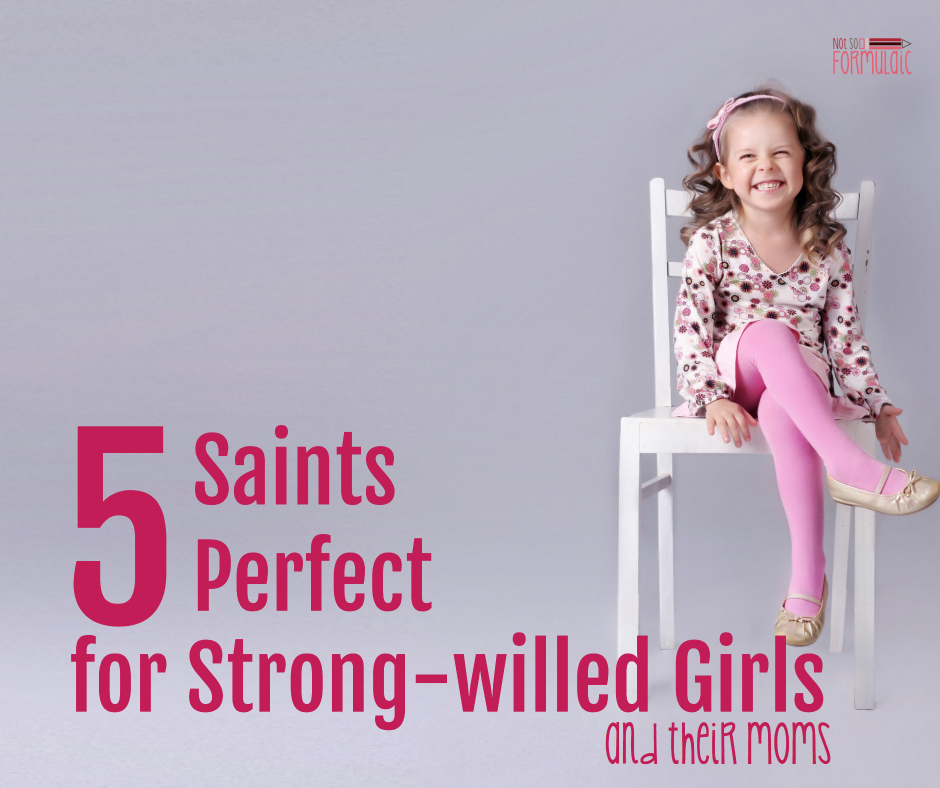 Parenting a strong-willed daughter is not for the faint of heart. It’s one part battle, one part wine, and one part fervent prayer. We love their feisty spirit; we see potential in that focused stare. But we’ve also seen what’s possible when that spark catches the wrong kind of fire.

Katie bar the door on you way out to the pasture, and woe be he who enters there.

Fortunately, our daughters have role models – strong-willed women who used their stubborn streak for God. I have five saints in particular that I call on for intercession as my daughter’s confidante and guide.

5 Saints Perfect for Strong-Willed Girls and their Moms

Joan of Arc, because strong-willed girls don’t take no for an answer

Thirteen is an awkward age.

Unless you’re Joan of Arc standing in the family garden, having a pleasant chat with Saint Michael, St. Catherine and St. Margaret, and then it’s really, really cool.

Joan was barely a teen when these visits first started, but neither her age nor her gender held her back from pursuing God’s will. At 16 she marched to the King and demanded an army. God had told her to restore French liberty from the English, and restore it she absolutely would.

Through the course of Joan’s crusade, men rebuffed, rebuked, and questioned. They imprisoned her, put her on trial, and sentenced her to death at the stake. But through it all, Joan never wavered in her faith and devotion.

Joan feared nothing and she made sure they knew it. She was untouchable with God at her side.

What Joan can do for our girls

Defiance has a negative connotation, and Joan was the textbook definition of the word. She wore men’s clothes. She gave orders to kings. And when authoritative figures said no and tried to stop her, she nodded politely and did it anyway.

Joan’s dissent wasn’t rooted in anger, however, nor did it come from selfishness or pride. Her actions came directly from a sense of righteousness, a quality perfectly-suited to our strong-willed girls.

She was truthful when lying was the common speech of men; she was honest when honest was become a lost virtue; she was a keeper of promises when the keeping of a promise was expected of no one; … she was full of pity when a merciless cruelty was the rule; she was steadfast when stability was unknown, and honorable in an age which had forgotten what honor was; she was a rock of convictions in a time when men believed in nothing and scoffed at all things; she was unfailingly true in an age that was false to the core; … she was of a dauntless courage when hope and courage had perished in the hearts of her nation…” Mark Twain; Joan of Arc

This is what we want for our daughters, a heart filled with passion for the Glory of God. When we commend them to Joan of Arc’s intercession and protection, we are entrusting them to the steadfast love of the Lord

A Prayer Composed by the Sisters of Saint Joan of Arc

O Saint Joan of Arc, courageous woman soldier, called by God to fight and save your country from the enemy; grant that I, like you, may hear God’s call in my life and have the courage to follow it faithfully, as priest, religious, married or single. May your motto: ‘My God must be first served,’ be mine also; so that through me, He may build His kingdom here on earth.

Intercede to the Master of the harvest, that He may send laborers into His harvest.

Saint Joan of Arc, pray for us. Amen

Resources for introducing our daughters to Joan of Arc:

Teresa of Avila, because a strong-will is best rooted in grace

Strongwilled children and books can be a dangerous combination. Take Teresa of Avila, for instance, a bright, highly sensitive child who couldn’t get enough of the stories of the martyrs. When Teresa was seven, she turned to her brother, Roderigo, with an earnest stare:

“Let us go to Africa immediately, and beg them to cut off our heads there.”

Teresa longed to be a martyr.  Her plan? Find it at the hands of the Moors. But like most young crusaders the adults around her were much wiser: Teresa’s uncle returned the two home.

Teresa’s first efforts at sainthood were only a taste at what was to come. She battled illness, frustrating colleagues, and at times, a difficult relationship with God. Her father denied her permission to enter the Carmelite order; Teresa left home anyway under the cover of night:

“I remember . . . while I was going out of my father’s house—the sharpness of sense will not be greater, I believe, in the very instant of agony of my death, than it was then. It seemed as if all the bones in my body were wrenched asunder…. There was no such love of God in me then as was able to quench the love I felt for my father and my friends.”

What Teresa Can Do for our Girls

Though Teresa set out with a quest for martyrdom, her devotion wasn’t singular – at first. The daughter of a romantic mother and a passionate father, Teresa was a beauty with great charm and razor-sharp wit. She spent her initial months with the Carmelites not in prayer but in conversation – she loved visitors, and she knew they loved her company, too.

And find it, she did.

Despite trials and tribulations, setbacks and illness, Teresa of Avila became one of the foremost voices of the Counter-Reformation, as well as a mystic and a Doctor of the Church.  She is proof our strong-willed daughters will move mountains, so long as they are wrapped in His grace.

Let nothing disturb you,

Let nothing frighten you,

All things are passing;

God only is changeless.

Who has God wants nothing.

Resources for introducing our daughters to Teresa of Avila

Have Courage St. Teresa of Avila T-Shirt from Pio Prints 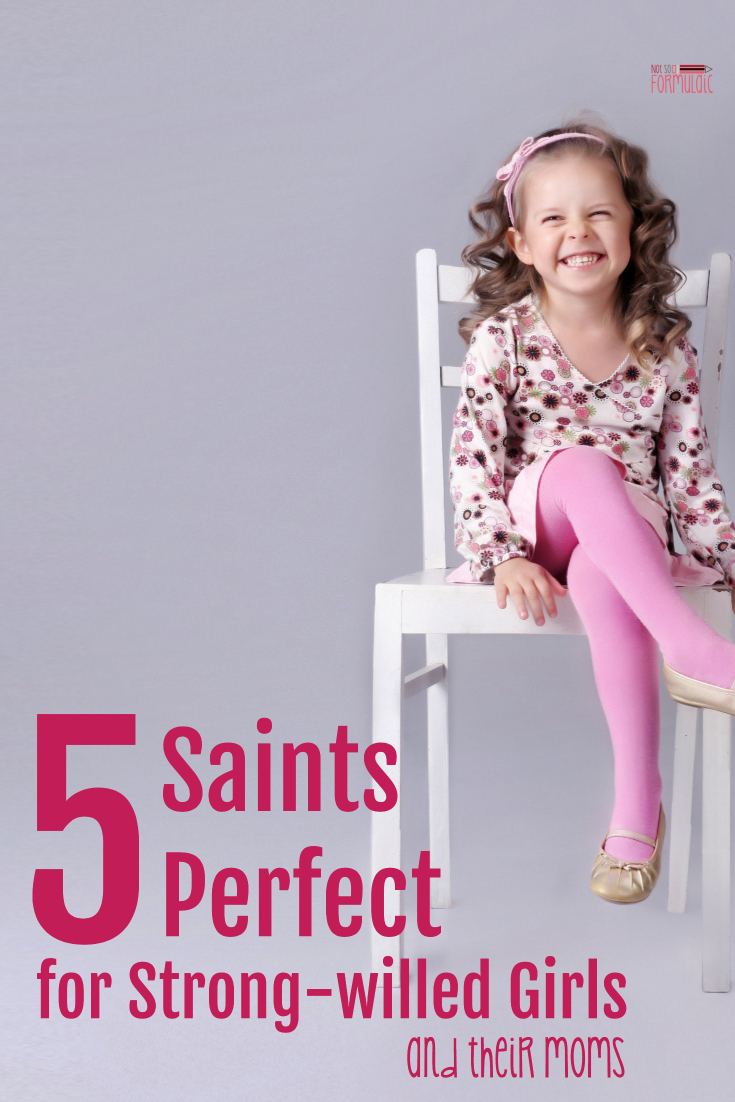 St. Zelie Martin and her daughters, St. Therese of Lisieux and Servant of God Leonie Martin – because prayerful guidance of a strong-will bears serious, hardcore fruit

“Her stubbornness is almost unconquerable. When she has said no, nothing will make her change; one could leave her all day in the cellar without getting her to say yes. She would sooner sleep there”

“She has a will of iron. When she wants something, she triumphs over every obstacle in order to gain her ends. But she is not at all religious. She says her prayers only when she cannot do otherwise”

“I ask myself, What will become of her when I am gone? It frightens me! If the sacrifice of my life were necessary to make a saint of her, I would gladly offer it”

I’m sure you know The Little Flower? The one with the little way? She started out more like a little tyrant, and her sister, Leonie, was even greater parenting challenge.

But their mother – oh, their mother, Zelie. She was a woman of infinite grace and quiet faith whose own quest for a religious vocation was thwarted at every turn. God had a different plan for Zelie; she was to marry Louis Martin and raise nine beautiful children, seven girls and two boys. It was their home life that fostered an intensely beautiful devotion among their children and sent at least two of them to leave an undeniable footprint on the world.

What Zelie, Therese, and Leonie can do for us (and our girls)

Life in the Martin household wasn’t easy: the girls were as headstrong as they come. But Zelie never wavered in her example or devotion. She loved God; she knew her children were created to love God, as well. Despite the utter exhaustion she often felt as the mother of strong-willed girls, nothing would prevent her from ensuring their salvation through prayer.

And ensure their salvation, she did.

Though the Little Flower began her life as the queen of cellar tantrums, Therese has become one of the most well-loved,  frequently quoted, and lovingly revered saints of all time. She and her sister Leonie (who became a Servant of God in 2015) conformed their own strong wills to that of their Heavenly Father, seeking a life in service to him as Carmelite nuns. In this way, the Martin women are saintly heroes. The daughters provide our girls with an example of faith and ordered submission; their mother is for us a beacon of hope.

Intercessory prayer to Zelie Martin
Blessed Louis and Zélie Martin, today we turn to you in prayer. By fulfilling the duties of your state in life and practicing the evangelical virtues as spouses and as parents, you have modeled for us an exemplary Christian life. May the example of your unwavering trust in God and your constant willingness to surrender all the joys, the trials, the sorrows, and the suffering that filled your life encourage us to persevere in our daily challenges and to remain in joy and Christian hope.

Resources to introduce our girls to Sts. Zelie and Therese and Servant of God Leonie

Our daughters might be strong-willed and feisty, but they’re poised to lead generations to the Lord.

I, for one, am willing to tolerate the battle-waging, so long as she’s a warrior for Christ.

Got a strong-willed girl who could use a patron?

Sister, so do I - and I've got you covered. It's all in the Patron Saint Family Toolkit!

Show me the Toolkit, please!

5 Tips for Homeschooling Your Strong-willed Child

3 Saints Perfect for Strong-Willed Boys (and Their Moms)

5 Saints Perfect for Strong-Willed Girls and their Moms 57985444