When Mary gave her fiat, it opened the door for the rest of us. If you’re unsure about the child you’re carrying – or even about motherhood at all – look to His Mother as an example, and let her motherhood change your heart.

Twenty weeks into my third pregnancy. The room was dark, the air was cool, and the tears would. not. stop. Baby was healthy and everything looked perfect.

Except for the fact I was carrying a son. 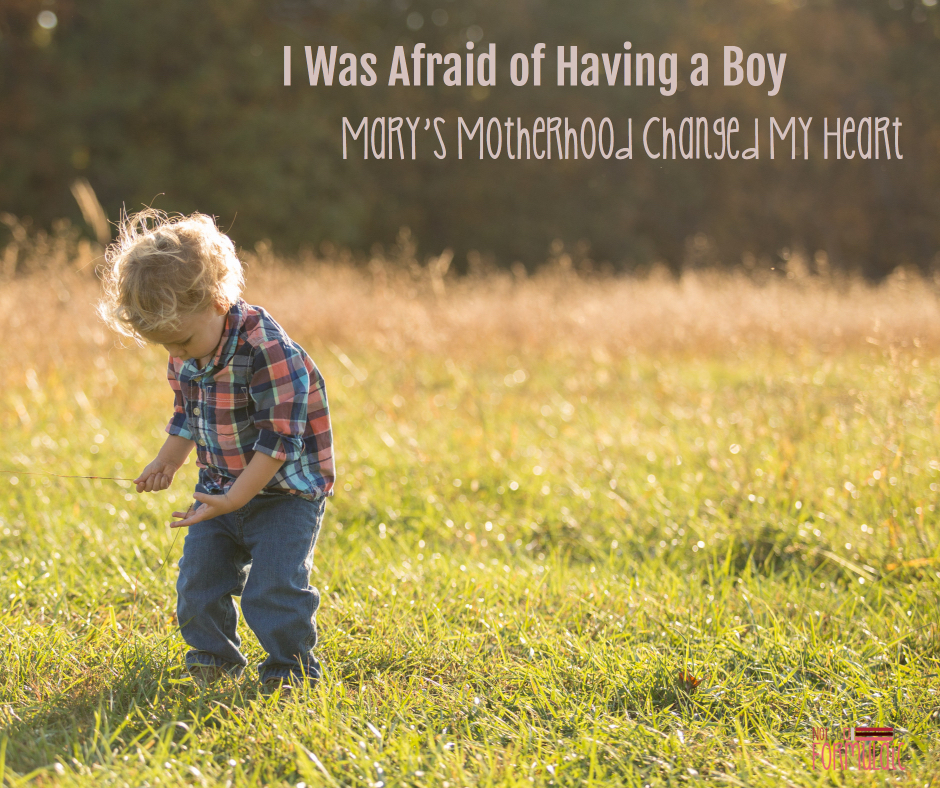 I was afraid of having a boy

A boy who would potentially do things self-proclaimed boy moms bragged about surviving as though every second of their motherhood merited a badge of honor.

You get the gist.

I didn’t know how to handle that. My previous child-rearing experience had been girls. They were of the tomboy ilk, so I wasn’t worried about frogs or snakes or reptiles. But I already had girl clothes. I had girl toys. I knew how to raise girls to be strong, independent, Godly women.

Raising a boy would be new.

It would be terrifyingly, horribly, undeniably different, and I have a problem with change.

My whole life has revolved around controlling my environment.

Case in point: my parents’ attempt to trade in old their vehicle when I was barely three. I snagged the keys, locked all the doors, and perched on the center console like a magnificent empress.

Thirty-five years later when the ultrasound tech pushed a wand across my belly, it was clear I had not moved beyond that stage. Worse yet, it had seeped into my faith life without me noticing. God felt far away and grossly manipulative. How could He who knew me before I existed give me a gift I would want to return?

I couldn’t talk about having a boy.

I couldn’t think about boy names.

I was angry, I was frustrated, and I had a lot of heavy theological questions.

I wanted them answered right then at that moment.

It was a silent, sorrow-filled time.

If I have learned one thing in my fledgling prayer life it is this: God answers our questions in his time, one far better than our initial understanding.

My son was born in late October, about a month before Advent began. As we prepared for our first Christmas as a family of five, the meaning of Christ’s incarnation began to grow on me like a flowering vine’s slow crawl up dead wood.

Mary had a son.

Mary nursed her son. Held him. Slept with his tiny form on her chest. I could see in my mind’s eye the way she traced the lines of his tiny face and counted small fingers and toes.

Mary did all that I was doing with a fully human boy, a fully divine man who would sacrifice his life for the salvation of the human race.

I was a woman who would never know the magnitude of suffering and joy in the Blessed Mother’s heart, and I had been afraid. 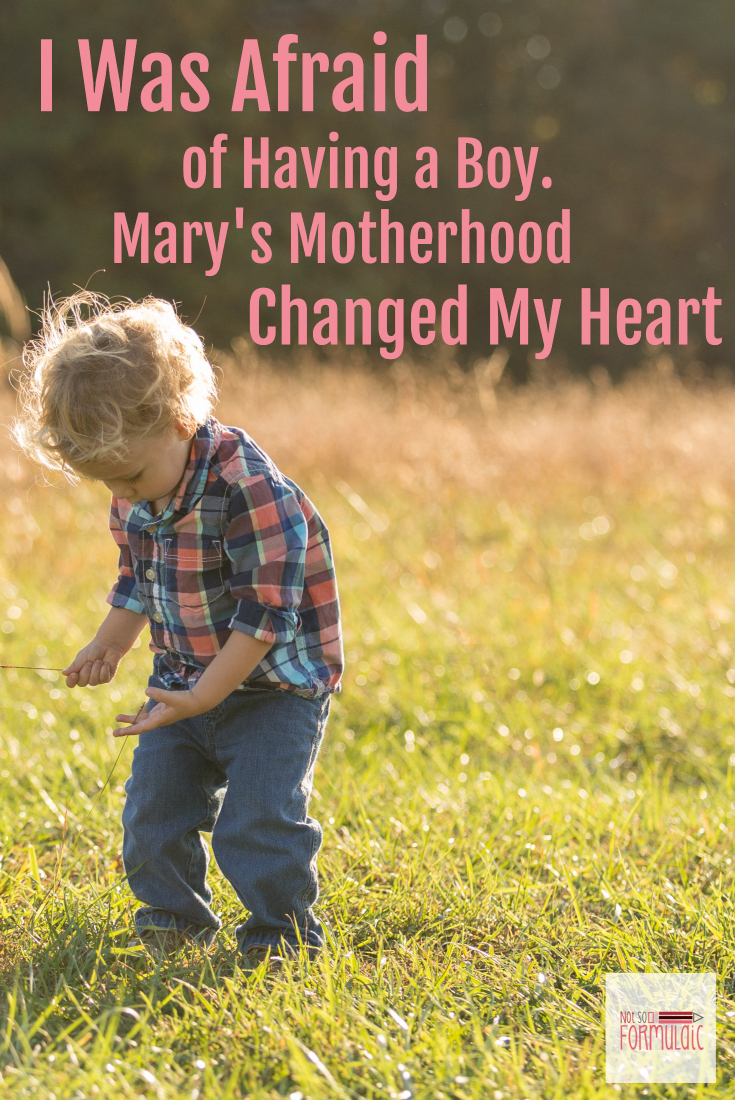 My son is three and a half now.  The baby boy I feared has filled my heart with more joy, laughter, and contentment than I could have imagined.  It happened slowly, every developmental milestone eliciting reflection on Mary and her son:

What hesitant joy did she feel when Jesus started crawling? When he took his first wobbly steps?

Did she ever grow weary of the constant retrieval of rocks and dirt from a holy mouth?

How many seemingly endless games of peekaboo did she play with him?  How many sleepless nights did she have? How many garbled toddler words could she decipher when nobody else could understand?

We know so little about Jesus as a child, but we can surmise that, since he was both fully human and fully divine, the Holy Family must have had the same experiences as every other human family.

And while a part of me understood the child Jesus would have gone through these stages, God knew I would not have appreciated the reality of Christ’s sacrifice if I had not had my own baby boy.

I would not have been able to let go of my selfish desires, and they were keeping Christ out of my heart.

My son’s presence has changed all that. His life has made real for me the true presence, the true meaning of God made man.  As my little man’s babyhood slips faster and faster away from me, I think back to that moment in my 20th week of pregnancy.

Of course, God knew the gift I needed far better than I ever could have.

Like Mary, I treasure all these things and ponder them in my heart.

3 Saints Perfect for Strong-Willed Boys (and their Moms)