Sensitive, gifted children can be a mystery even to their parents, and finding the right sport or creative outlet can be tough. Here’s how to seek out and match your child with the right extracurricular activity, one that will nourish both body and soul.

It started the second week of preschool.  Three mornings a week, three hours a day.  My social butterfly, my natural leader, my people pleaser, clinging to my leg and sobbing at the classroom door.

Normal separation anxiety, they said.  “It peaks the second week.”

By early November the teachers were concerned. 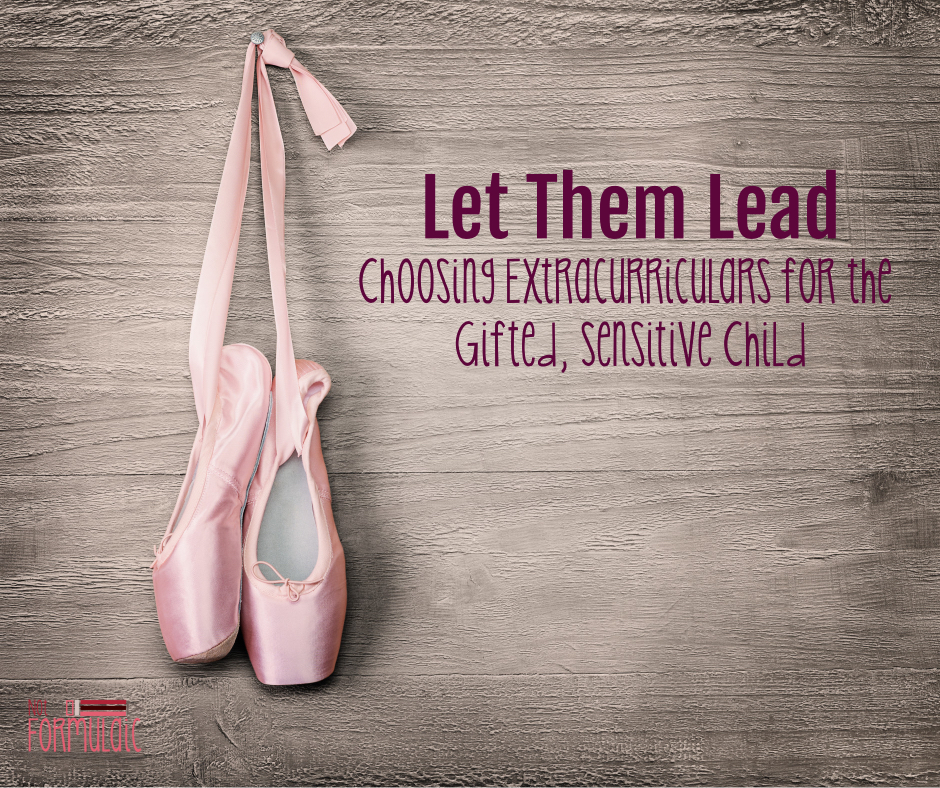 From the first quarter progress report:

“Fixates on your absence.”

From the telephone conference:

“Most kids recover in the first five minutes. She takes much longer.  Maybe you should have her evaluated?”

We tried ballet class. She had her favorite tutu and sparkly shoes. She bounced in the room bursting with excitement but spent the class in the corner with her arms crossed. Tears lined her bottom lid.

“She’s got excellent body awareness and she’s smart as a whip, too. But she needs to work on the shyness.  It’s damaging her ability to participate.”

Soccer practice. Coveted team jersey; comfortable cleats. She ran for the field with her ball, then sulked from the sidelines while the other kids played.

“She’s exhibiting defiant behavior. Please work with her if you want her to stay on the team.”

It wasn’t just activities and events that were problematic.

At home, she was afraid to go outside in cloudy or windy weather. She was waking several times a night from terrifying dreams and the fear of being alone. She would break down in tears at random, realizing that evil existed in the world. I was frustrated and embarrassed, ignoring textbook examples of Dabrowski’s emotional and imaginational overexcitabilities.  Truthfully I was lost in them myself, running off a cliff of desperate scenarios:

My daughter would be a hermit.

My daughter would be an outcast.

My daughter would be unable to function as an adult.

My daughter would have unstable, unsatisfying relationships.

My daughter would be afraid to go swimming at the beach (because priorities).

It had to be dealt with. Swiftly.

I huffed. I puffed. Like an unhinged mama wolf on steroids, I would blow down the house of cards she had built around her fragile heart.

She would start enjoying life. Or else.

She came into my room crying.

“I’m walking to Grandma’s.  If I go, it will be two kids instead of three and your life will be much easier….”

She had a bag.  It held her hairbrush, her wooden rosary, an old unicorn slipper, five stuffed animals, and a rubber snake.

Walking to Grandma’s, she said. To make things easier on me.

Or else what, Ginny? 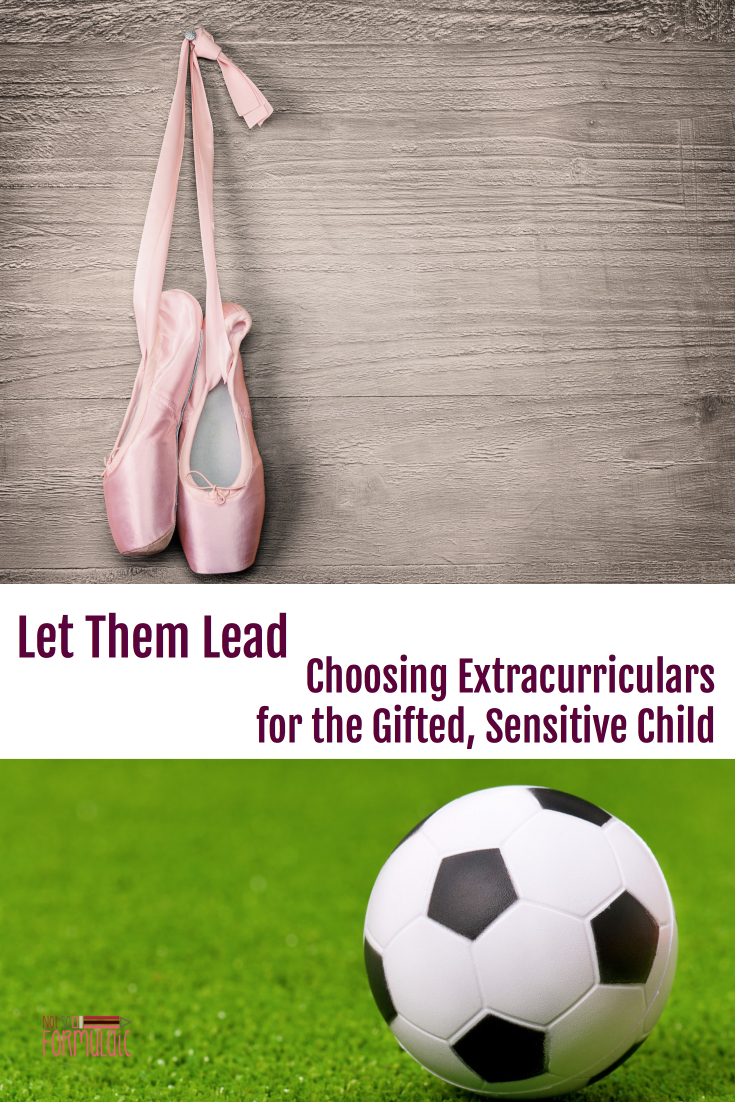 Society equates precocity and intellectual prowess with maturity and poise. But intense physical, sensual, emotional and imaginational characteristics lead to social and emotional struggles in the outside world. A gifted child’s academic experiences, creative outlets, and physical interests end up bearing the brunt of it. Parents push their children into all manner of classes and activities from infancy. I saw it in the classroom, and I saw the toll it took on my students. I swore I would never become one of those parents.

And now I had.

At five it’s running to Grandma’s.  What will it be at 15?  Will she find herself awash in self-doubt and anxiety, making decisions out of fear?  Will she follow in the footsteps of “Genius Girl,” a local high school senior who faced such intense pressure to succeed at our local STEM magnet school that she concocted an elaborate hoax, convincing parents and classmates that Stanford and Harvard were fighting over her in an admissions tug of war?

Not if I can help it.  Forcing her to face her anxieties does nothing to alleviate them. While some would argue this builds character, I argue it builds mistrust.

I had taken her to activities she had begged to join only to see her floundering and misunderstood.  Rather than listen to her cries for help, I bought the lie that continued exposure would eventually lessen the blow.  It did not.  Rather, it forced this beautiful, vulnerable child to pack a bag and plan an escape to lessen her burden on the family.

How to Find the Perfect Activity for Your Sensitive, Gifted Child

There’s no harm in pursuing activities in which your child shows interest.  But when you’re dealing with a sensitive child, it’s imperative that parents listen and follow the child’s lead.

You don’t have to stay inside the room or hover during the whole class. An occasional peek in the door or casual stroll by the field can work wonders for a sensitive child, especially during the first few sessions. Since my daughter struggles with separation anxiety, it’s frequently a matter of just letting her know I’m there. Other children might need a quiet thumbs-up of approval until they are more comfortable – it just depends on the individual need.

Sensitive, gifted children often have preconceived ideas about what a situation or activity will be like. When the reality differs from expectation, the emotional toll can be tough. To avoid this, provide as much information about the activity or sport as you can. Watch videos, observe practices, and talk to mentors and coaches ahead of time. Your children will be much more likely to have a positive experience if expectations and reality match.

Choose groups and mentors with whom your child is familiar

While this isn’t always possible, it helps to place sensitive children with peers and adults with whom they already have formed positive relationships. Do you have a neighbor who coaches a soccer team? Friends who take dance at a local studio? Familiarity with people and places can alleviate a great deal of anxiety for sensitive children.

Sometimes familiar placement isn’t possible, and there’s nothing wrong with that. Try shadowing a team or a class for a few days to get a feel for it, or take your child to meet those involved ahead of the activity’s start.

My kiddo has grown a great deal since the second week of preschool, and it’s been quite a while since she’s threatened to run away.

But her sensitivity will always be a part of her, and I’m glad for that.

Finding her Pack: Intellectual Peers and Community in a Gifted Child’s Life

Growing up Gifted: Navigating the Real World with a Gifted Child

Getting Out of Survival Mode: When Gifted Homeschooling is a Drag

How To Find the Perfect Activity for Your Sensitive, Gifted Child (And Guard Her Heart, Too) 1008382139

How To Find the Perfect Activity for Your Sensitive, Gifted Child (And Guard Her Heart, Too) 494744543