I know what it’s like in the trenches raising Twice Exceptional children. But I promise it gets better. Our children know us better than we know ourselves.

Last Friday afternoon, I put myself in time out. The girls and I had butted heads over school all morning and the little guy had refused his nap. To compound it all, the house had reached critical mass mode – you know, the one where you begin to wonder why the health inspector hasn’t shown up.

So I took Daniel Tiger’s advice and counted to four, staring out my bedroom window while I listened to the kids play downstairs. I tried to pray but watched the wind wreak havoc with the trees instead; it seemed a fitting manifestation of the chaos in my heart.

My back was to the door.

I heard her footfalls before I saw her.

“Mom,” she said, her voice cheerful, “I thought you could use a SNACK!”

My willowy girl stood in front of me, her Roman nose wrinkled under sparkling gray eyes. Her left hand pinched the stem of a slightly-overripe banana, peeled from the bottom up the way a monkey would have done. In her right hand, she held a piece of toast, its blackened edges surrounding the last scrapings of peanut butter from the jar.

I swallowed. She sniffed. My mouth opened and closed a few times, wordlessly.

“I’ll just leave it here,” she said, setting her gift down. “We’ll be downstairs…..” she called out behind her and bounced out of the room.

She left me dumbfounded, alone with my thoughts and my iPhone.

I snapped a photo of her snack and cried. 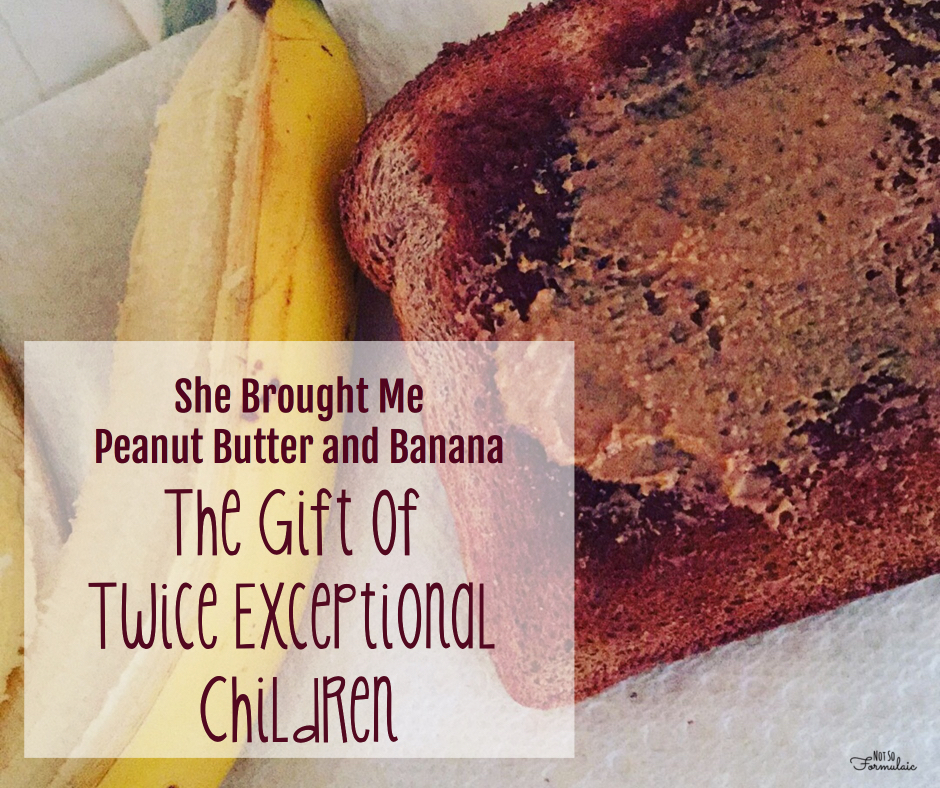 The thing is, my kids are smart.

Really smart. And I don’t say this to brag.

Their intelligence comes with a whole lot of baggage, so much so I’ve wished that my kids were normal. It’s like Newton’s Third Law of Motion, but for the gifted: every action has an equal and opposite reaction.

My kids are afraid of lots of things.

Movies they haven’t seen before (which means pretty much every movie until they’ve seen it, putting us in some strange Moebius loop of terror and acceptance).

Large gatherings, both inside and out.

And peanut butter and bananas.

At least until last Friday.

Before that exchange in my bedroom, G hadn’t touched either of those foods in eight years.

We lost peanut butter to the disclosure of her aunt’s life-threatening allergy when at 18 months, Gray equated any contact with the stuff to premeditated murder. It wasn’t long before bananas followed suit: she was done after one viewing of Horton Hears a Who, wherein the Wickersham brothers fling the fruit like missiles.

There are other foods she won’t dare to eat, like sandwiches, meat of any kind, and pretty much every vegetable known to man. It’s all lost in a vortex of sensory aversion, anxiety, and photographic memory. But my girl knows her mama, and she’s well aware of my weakness for peanut butter toast with banana. So on Friday when I languished in my bedroom in need of support and an overdue nap, she dropped bread in the toaster, scraped peanut butter from the jar, and peeled a projectile banana.

Their exceptionality has colored some great moments, from “relaxing” family outings to Christmas card photo sessions (in 2008 AND 2012, because we didn’t learn our lesson the first time). But through the process of mothering three of these exceptional gifts, I’ve learned a few hard, sweet truths:

They are called Twice Exceptional for a reason

They’re gifted. But so what? It’s their vulnerabilities that help us see life more clearly: its fears and its joys, its complications and its triumphs. Their victories are made all the sweeter because of the challenges they face to get there.

Our kids are quirky. What child isn’t?

It’s an issue for 2E parents because the breakdown is so violent and public. But if we give everyone else the benefit of the doubt, why can’t we do the same for ourselves? Our experience teaches that every parent fights a battle we know nothing about. Honestly, the same courtesy extends in our direction. We need to be ready to accept that.

Our kids know what we need when we need it.

The apple doesn’t fall far from the tree. They see their own traits reflected in us and eventually, when we need them, they rally – because we have rallied for them.

They feel deeply. They love ferociously. And they thrive when we respond with that same sort of devotion, even if most of the time we’re too spent to freely give. The truth is, we don’t have to understand someone to love them. Our children know that better than we do. 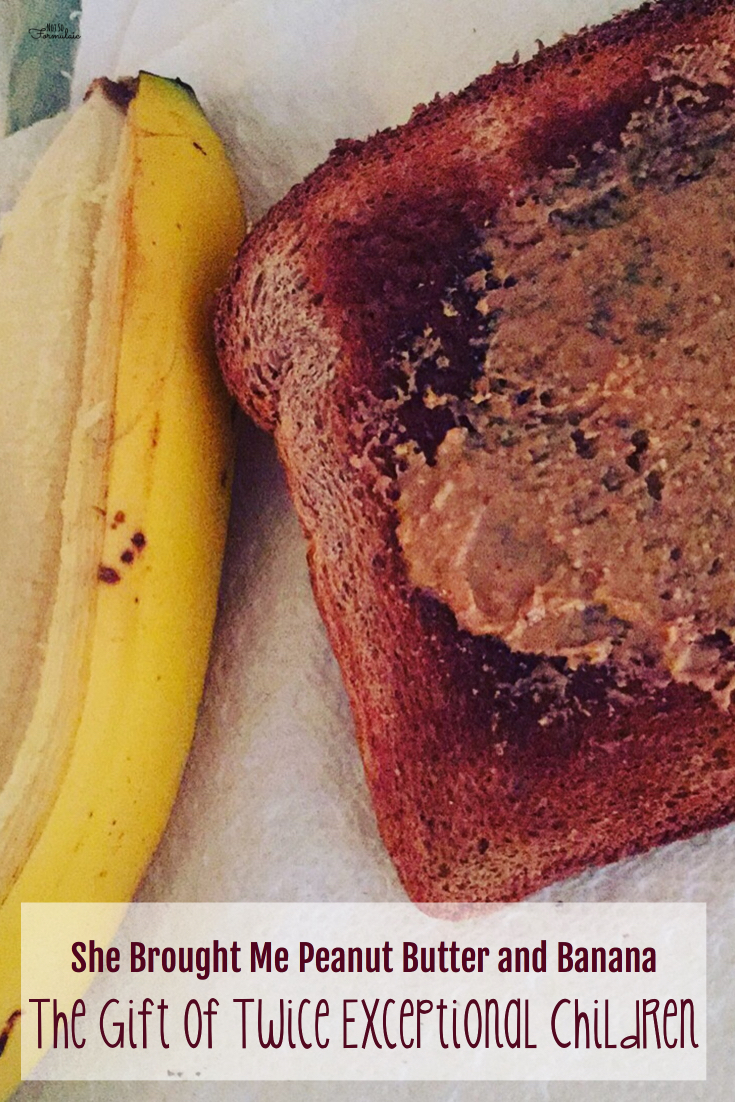 I’ve removed my ten-year-old from a bounce house birthday party by force.

I’ve hoisted my writhing six-year-old across my shoulders, slogging half a mile up a crowded beach in desperation.

I’ve been accused of child abuse while my two-year-old melted down in a big box store.

But I’m here to tell you – it gets better.

And they bring you peanut butter and banana, right when you need it most.

I Wanted My Daughter to Be Normal. Here’s What I Realized Instead

Is Your Child Twice Exceptional? Here are 4 Ways to See It, And Why You Absolutely Need to Know

Afraid of Grace: Preparing an Anxious Child for the Sacraments

When Picky Eating is More than a Phase: The Truth About Problem Feeding

She Brought Me Peanut Butter and Banana: The Gift of Twice Exceptional Children 1161615209

She Brought Me Peanut Butter and Banana: The Gift of Twice Exceptional Children 1597443710