Growing up gifted isn’t easy – not for the parent or the child. Navigating the real world with your gifted child takes patience, love, and a heavy dose of unwavering support.

The Infamous Doggy Purse Debacle of 2013, and The Great Brownie Incident of 2009.

I’ve shared the Doggy Purse Debacle before, but the Brownie Incident has remained the stuff of mystery, shrouded in a sugar-coated haze. 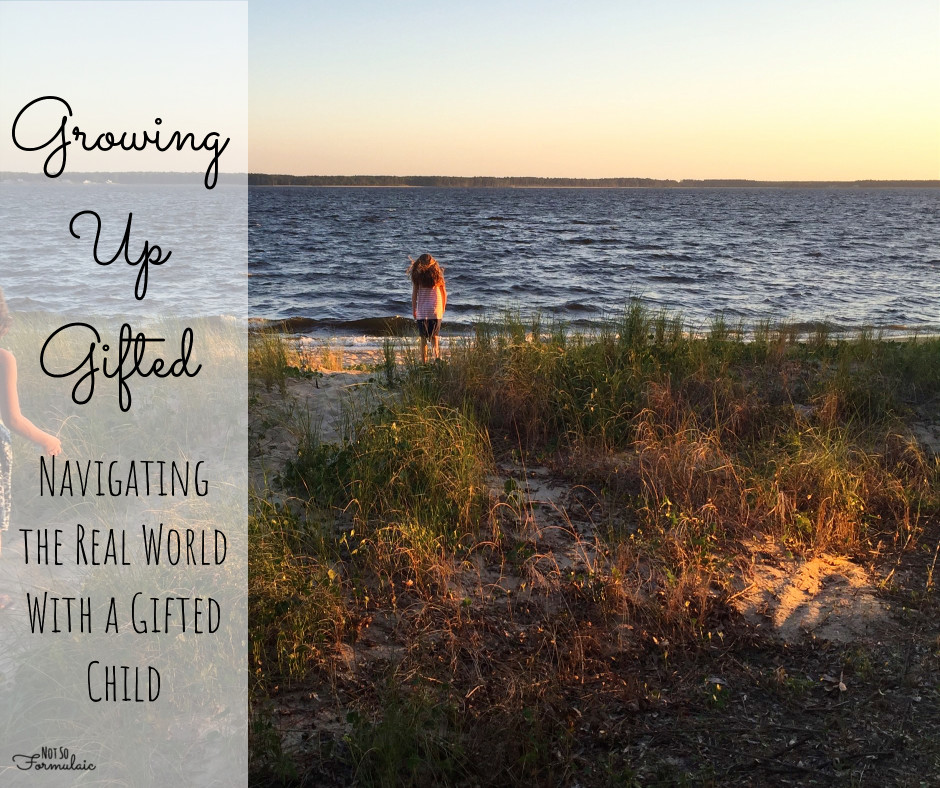 We’d been on the road eight hours. Fatigue, hunger, and general malaise had begun to take its toll.

Dan suggested take-out. G begged for books and the “home-tel.”

But it was Asheville, and I was a foodie. I’d had my eye on a hipster dive recommended via Southern Living, so I bribed them both – Dan with a beer, G with a brownie.

The place had plenty of beer.

It didn’t have any brownies.

At this point in our parenting journey, we didn’t yet know that G was a twice exceptional preschooler. We had suspicions of something afoot, but for the most part, we were the clueless first time parents just tagging along for the ride.

And oh, what a ride it was.

G’s sensory processing skills were maxed out; her expectation to reality ratio ridiculously high. The child was holding herself together by sheer force of brownie will, which of course fell apart the minute she realized those expectations had been quashed.

First came the guttural moaning, the likes of which I had never heard.

My ears buzzed. My cheeks burned. My heart stopped.

I scanned the room, unable to move.

Where was Professor X, come to take my mutant child?

Time stopped. Dan threw three $20s on the table. I grabbed the child and my purse.

We blazed through the door with our flaming banshee, sprinting across the parking lot to the safety of the car.

And that’s when all hell broke loose.

She bucked. She kicked. She flailed and hit and gnashed till she was purple, her blonde hair matted in a mess of mucus, tears, and sweat. Her body went rigid; I held her in the seated position while Dan secured the car seat.

Through 40 minutes of rush hour traffic our beautiful baby raged in the backseat. I was crying, too, by the time we reached the hotel parking lot; the car had barely come to a stop before she was in my arms, through the lobby, and up the stairs to our room.

My baby had fallen asleep.

Eight years later on another mid-August, Carolina evening, she’s sitting next to me on the beach house porch. Our rocking chair cadence floats above the pounding surf; late twilight traces the gold in her hair.

There’s no meltdown or outburst, no frantic rush for the door.

Just paralyzing guilt, fear, and the insistence I don’t know her at all.

If I didn’t see the same behavior in my younger daughter, now six, I’d chalk this revelation up to tween-age angst. But both of my ruby cheeked cherubs who occasionally (publicly) lost their minds have become sullen, self-conscious, and withdrawn. Where once they understood and abhorred true injustice from afar, they now experience it on their own as tangible and real. Their gifted brains are wired to access, evaluate, and synthesize information in a highly effective manner – often more effectively than their little hearts can take. Meltdowns over brownies and doggy purses have given way to crippling anxiety for one, and angry self-loathing for the other.

And they both want to navigate it alone. 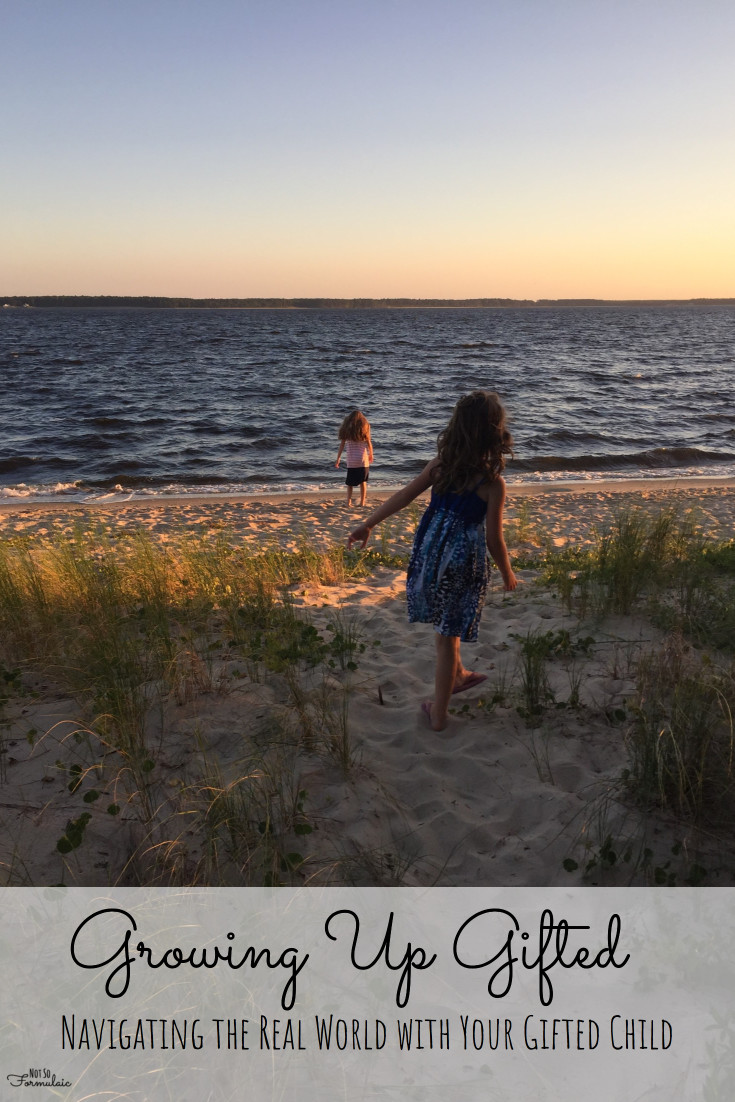 When it comes to most gifted children, however, vulnerability trumps bravado every time. Being able to identify, process, and evaluate an intellectual concept has no bearing on a child’s social-emotional growth. Even if they think they can handle heavy topics without a parental assist, the truth may be quite the opposite: in many cases, they simply aren’t equipped to do so.

In her article “What Teenagers Need From Us More Than (Almost) Anything,” HuffPost contributor Kara Powell references a passage from Untangled: Guiding Teenage Girls Through the Seven Transitions:

In the midst of inevitable parent/child conflict, Damour writes:
Your daughter needs a wall to swim to, and she needs you to be a wall that can withstand her comings and goings. Some parents feel too hurt by their swimmers, take too personally their daughter’s rejections, and choose to make themselves unavailable to avoid going through it again…But being unavailable comes at a cost…Their daughters are left without a wall to swim to and must navigate choppy—and sometimes dangerous—waters all on their own.

Now I must admit – I’ve only read Powell’s article and not Damour’s book. But the passage resonated with me just as it did with Powell. Gifted kids face rapid intellectual and emotional change. It’s emotionally exhausting when they lash out or push away. It may be tempting to cower in the closet while the F5 rages outside, but where does that leave our kids?

Eight years ago in that Asheville parking lot, I wrestled a preschool hellhound. This was probably a misguided move – we should have ridden out the storm there – but at the time, girding for battle seemed necessary. Why? Because as parents, we do what we must in the face of our children’s crises.

Weren’t we tired then?

Why should things change just because the triggers do?

Gifted parenting (heck – parenting in general) doesn’t get easier. It just changes. One day we’re heading off Godzilla as he rages against non-sorting Matchbox cars; the next we’re talking a caped crusader down off the ledge of social injustice. We can neither take umbrage at their buffets nor hide ourselves away.

The alternative consequences are far more devastating than our own emotional toll.

Let’s face it: being a wall stinks.

But we’re also absolutely vital to our children’s survival. They need a windbreak; a place of rest; a shelter in the brownie storm. We might be worn and old and a few hits shy of breaking, but we’re still standing – and we’ll keep standing – as long as our babies need us.

Growing Up Gifted: Navigating the Real World With a Gifted Child 1582943043

Growing Up Gifted: Navigating the Real World With a Gifted Child 830227506