Want to keep your kids Catholic? Teach them to defend their faith with apologetics for kids. (This post may contain affiliate links. Check my disclosure policy for details).

There had been an argument – that much I knew. What I didn’t know was over what or with whom, despite B’s slightly breathless, quasi-detailed explanation.  The story tumbled out in a high pitched, rapid fire torrent, entire sections of dialogue recreated but lost to road noise and toddler babble.

“Wait  a minute, B. Who were you talking to? What happened at snack?”

“I told you, Mommy,” she said, flinging a sandwich bag across the backseat to her brother. “It’s fine now. Miss Diane explained we were all talking about the same thing, so it didn’t matter anyway.”

I got the rest of the story the next day, on the way home from the doctor’s office. G had been pretty quiet, until: 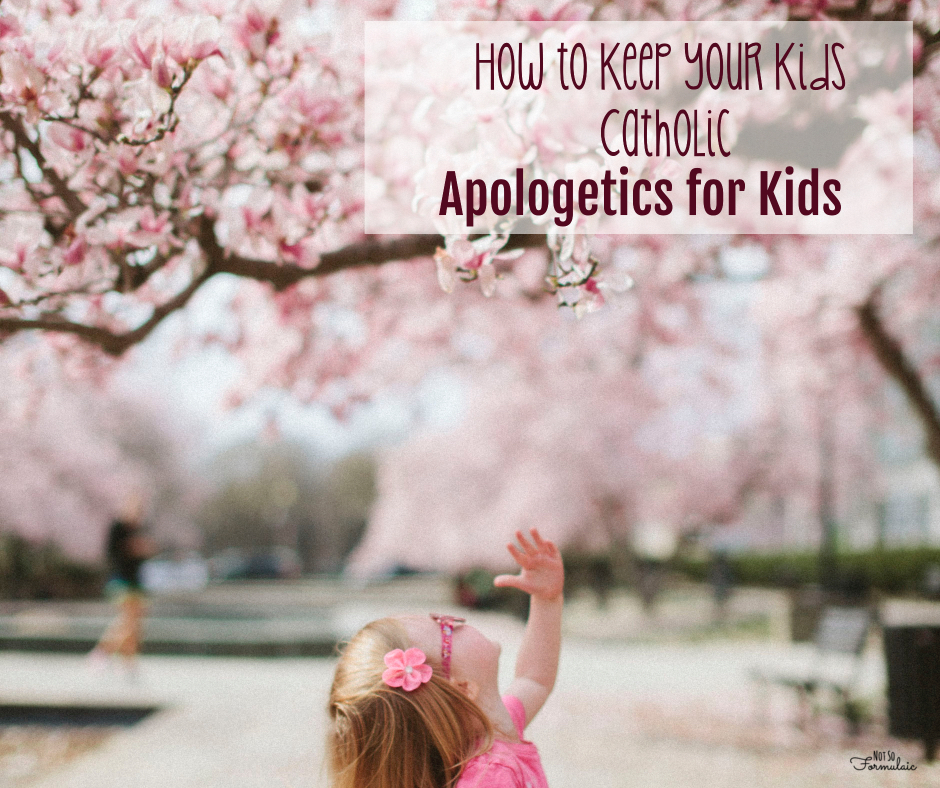 “It really bugs me when people say Catholics aren’t Christian.”

She sighed. “I said it bugs me when people say Catholics aren’t Christian. It’s not true, and they shouldn’t say it.”

“It bugs me, too,” B said. “Like yesterday. That’s what got everybody so confused.”

“Could somebody please explain what happened? G? Where you there?”

I could see B’s face in the rearview mirror, her brows knit together in concern.

“Is what S said true, mom? That we can’t be Catholic and Christian, because we pray to Mary?”

“We don’t pray to Mary,” G said, her voice weary with frustration. “We ask Mary to pray for us, just like we ask other people to do.”

“Did you tell her that, honey, when everyone was arguing?” I asked.

“No,” G admitted. She was quiet for a moment, then said,  “The next time I see her, though, I’m going to tell her the truth.”

Telling the Truth: How to Keep Our Kids Catholic with Age-Appropriate Apologetics

We live in an area where Catholic community is easy to find. Our Diocese is vibrant. Our parish is bustling. Our homeschool group is massive. We have so many Catholic friends and family close by that I often joke we live in a little Catholic bubble.

Except we don’t – as my daughters’ experience confirms.

In August of 2016, Georgetown University researcher Dr. Mark Gray revealed the results of two studies performed by the Center for Applied Research in the Apostolate. Gray and his colleagues performed a random sample of young people (15-25) who no longer identified as Catholic. The statistics were startling:

13: The average age at which respondents said they left the church

63: The percentage of those interviewed who said they stopped being Catholic between the ages of 10 and 17.

23: The percentage of those interviewed who said they left the faith before age 10.

Gray’s comments regarding the study reveal a generation of young people hungry for the truth. Many of the respondents expressed a desire for proof or some sort of emotional connection: for some, God and religion were a fairytale. For others, mass was devoid of spiritual meaning.

The reality is that our kids face a flurry of conflicting messages. From the teachings of our Protestant brothers and sisters to the tenets of secular humanism and moral relativism, children face a barrage of influences at a young and vulnerable age. Even their own peers have misconceptions and negative attitudes of the Catholic faith.

Is it any wonder so many parents worry about keeping their kids Catholic?

The answer, of course, is apologetics: the practice of defending one’s faith. Most families and schools begin instruction in this matter in high school, but as CARA’s research and my own kids’ experiences reveal, this is far too late. 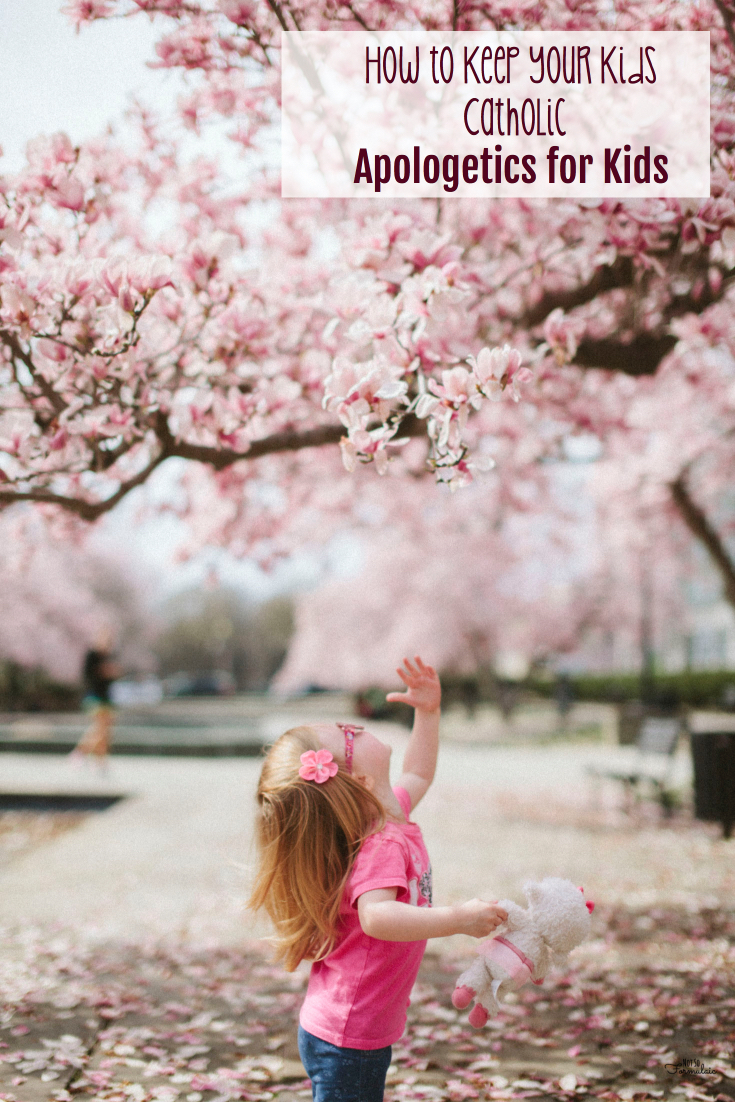 Fortunately, it isn’t difficult to teach apologetics in an age-appropriate way.

Take a little conversation, a lot of modeling, and a handful of resources, and you’re on way.

Talk About The Issues – A Lot

It’s no secret our kids are exposed to all manner of attitudes and lifestyles. We can neither hide them under a rock nor glamorize sin. In order to teach the truth without marginalizing it, we have to talk to our kids not only about what we believe, but why we believe it:

Why is marriage a sacrament?

What does it mean to be pro-life?

Why do we honor the saints and have statues?

What is the real presence, and why do we believe?

When it comes down to it, the why is just as important as the what. We owe it to our kids to teach them both.

Apologetic skills aren’t just about what you know: they’re also about how you present it. Teach your children how to have fruitful, respectful conversations with a focus on the truth, not personal attack. Brainstorm a variety of situations in which such conversations might arise, then role play how to approach and handle it. The more practice kids have in a comfortable environment, the more likely they’ll be able to have meaningful conversations that uphold the truths of our faith.

There is a wealth of information out there for families and kids wishing to practice apologetics. From the Theology of the Body for Kids to the Friendly Defenders Flash Card set, parents can find a variety of age-appropriate resources to teach their children about the faith. (I’m particularly partial to To Hear His Voice: A Mass Journal for Catholic Kids)

As parents, we are the primary educators of our children. And the great thing is that our kids are learning, even if we don’t feel like we’re actively teaching them. But the more resources and knowledge we can give them, the better. The truth is always the truth, and it’s especially powerful when it comes from the mouths of babes.

The Truth About Smart Kids and Faith

To Hear His Voice: A Mass Journal for Catholic Kids