Looking for a way to explore the beauty of the Mass with your children? The Holy Mass on Earth As It Is In Heaven is an excellent resource for Catholic families seeking to learn more about the Mass.

I received an advanced PDF copy of The Holy Mass for review. All opinions are my own. 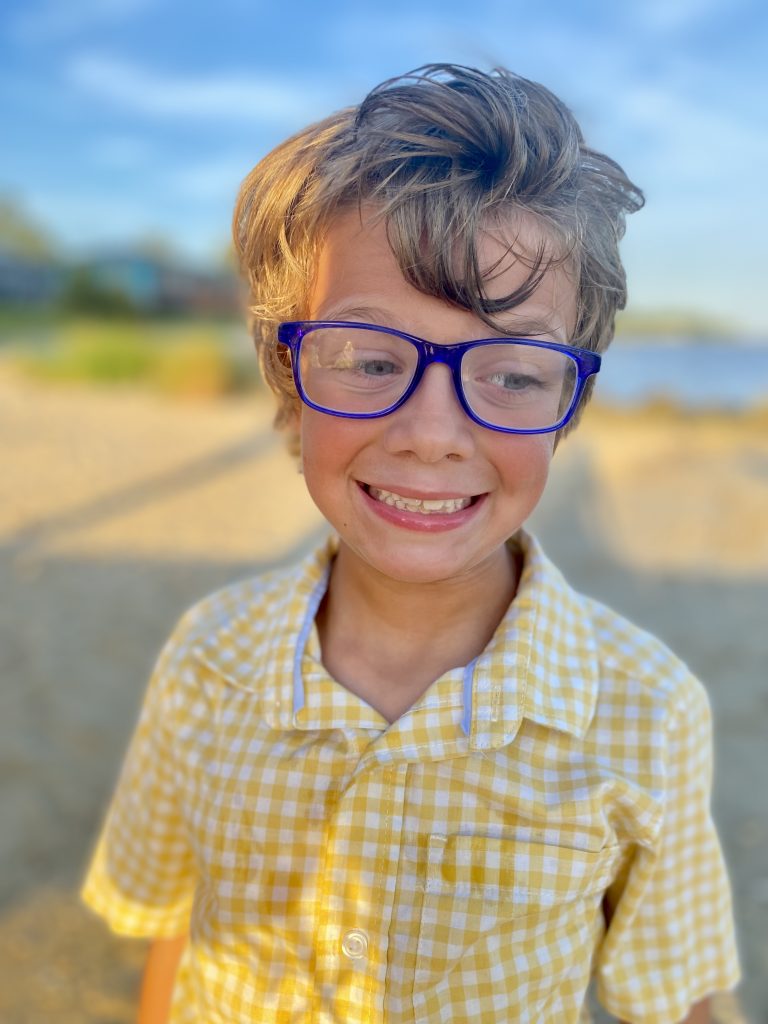 He used to love Mass when he was a toddler, pointing at the altar and staring wide-eyed at the stained glass and statues. Lately, now that he’s older?

Yeah. Unfortunately, not so much.

He’s super smart. Taught himself to read when he was three. He eats physics and engineering for breakfast and has an intense, zen-like focus on subjects that interest him.

Mass does not interest him. It makes Mass as a family hard.

It also hurts my heart, because I’m his mother. I want him to fall in love with Christ and the Church. I have explained the purpose of the Mass to him. And on a basic level, he does know essentially why we go. But he’s the kind of kid who has to see components first and understand why they fit together, fully understanding the purpose of a thing before being willing to appreciate it.

Remember the engineering for breakfast bit?

Lego and the Mass: The Holy Mass on Earth As It Is In Heaven 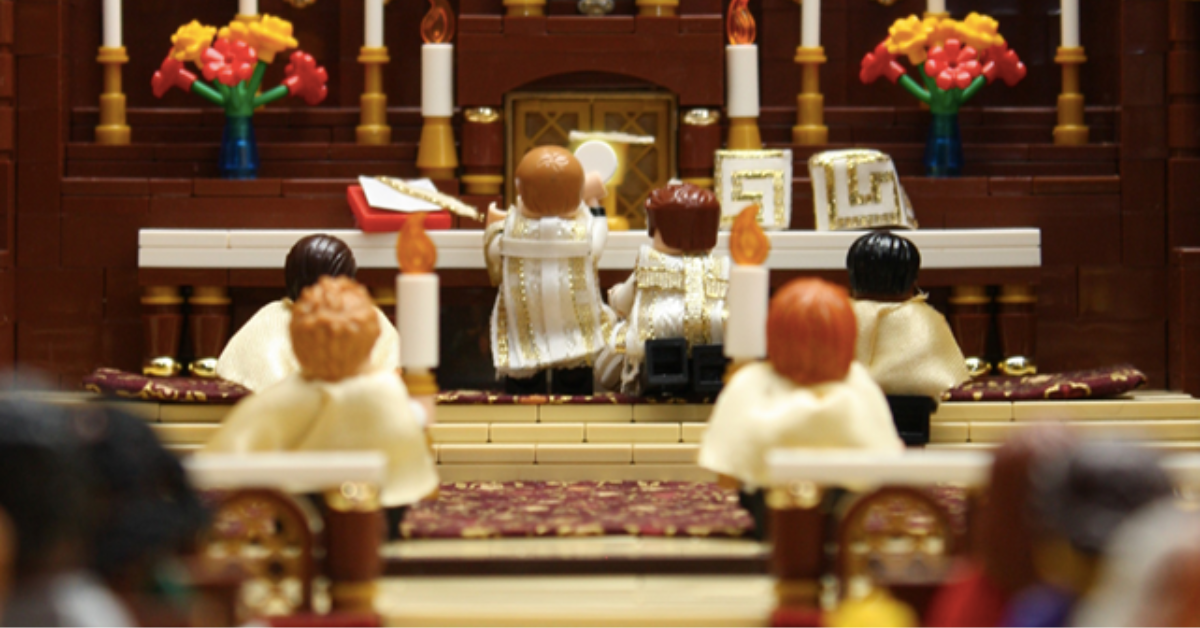 In 2018, I was honored to receive an advance copy of The Catechism of the Seven Sacraments by Kevin and Mary O’Neill. The O’Neill children’s vast Lego collection (and their children’s creativity) inspired Kevin and Mary to use the building toy for evangelization:  to explain the teachings of the Catholic faith to a wider family audience.

Click on my review, and you’ll see why I was so excited to hear they were working on a new edition, this one explicitly focused on the Catholic Mass.

Because honestly? Lego is a gateway for my son. Show him anything that involves those little plastic bricks and you’ve hooked his interest. The O’Neill’s new book, The Holy Mass On Earth As It Is In Heaven, is an answer to this mother’s prayer.

The Holy Mass On Earth As It Is In Heaven uses the same full-color comic approach as The Catechism of the Seven Sacraments, led once again by our intrepid guides, Fulton and Cynthia. 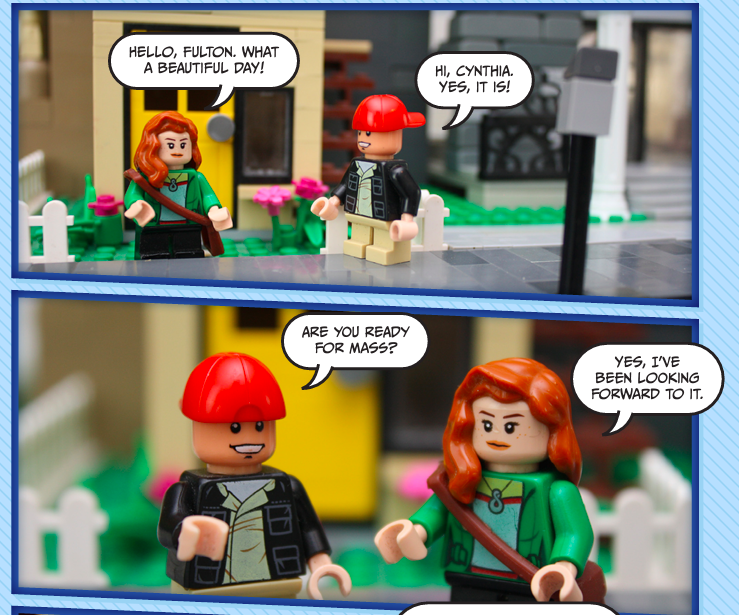 In this case, the purpose and the treasures of the Holy Mass

The (Literal) Building Blocks – Typology and the Mass

One of the things I love about this series is the focus on typology – “how the Old Testament is fulfilled in the New Testament and how the New is revealed in the Old.” The Holy Mass on Earth looks at six facets of the Mass and reveals the manner in which the Old and New Testaments are reflected in every piece of it.

It is divided into six chapters that lead the reader toward a better understanding of Scripture and Tradition, from the Sacrifice of the Mass itself to the priesthood and the Holy Eucharist.

The Problem and the Solution: Sin, Salvation, and the Timeless Sacrifice 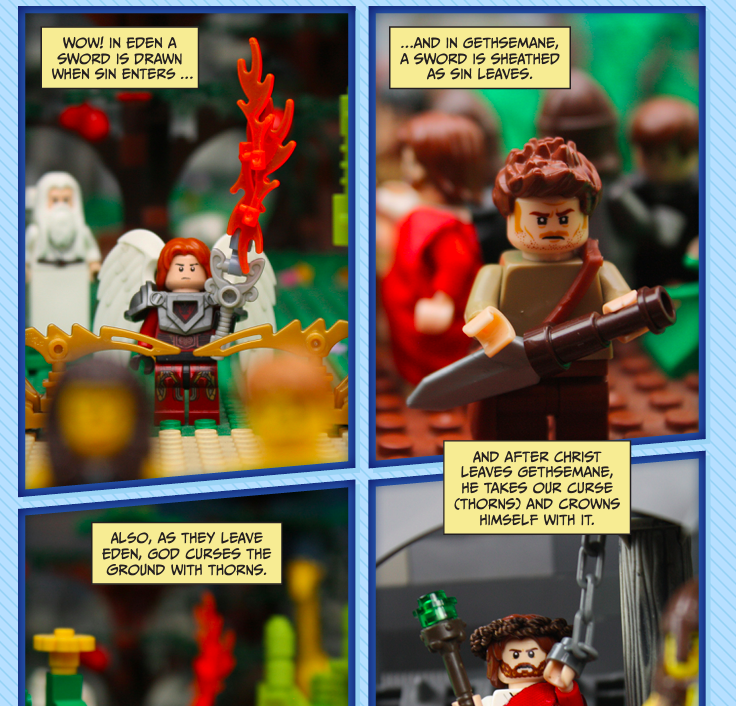 How did sin enter the world? How does it leave us? The Problem and the Solution uses typology to reveal the connection between a number of Old Testament figures and events and Christ’s Passion and death on the cross, including

At the end of the chapter, Fulton and Cynthia provide an excellent overview: 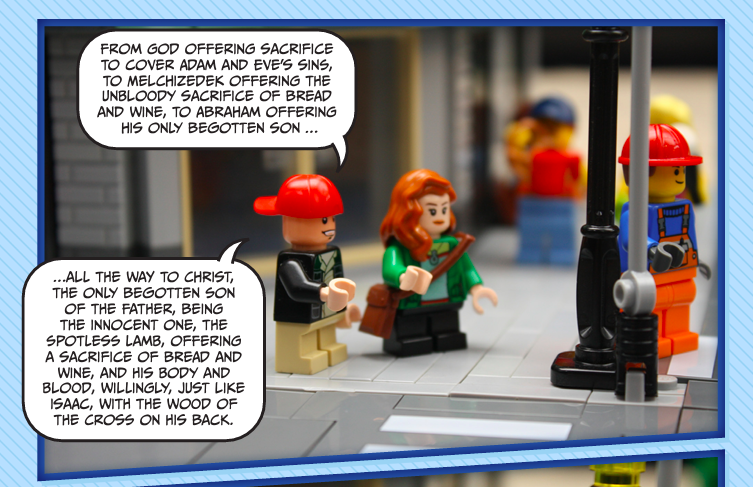 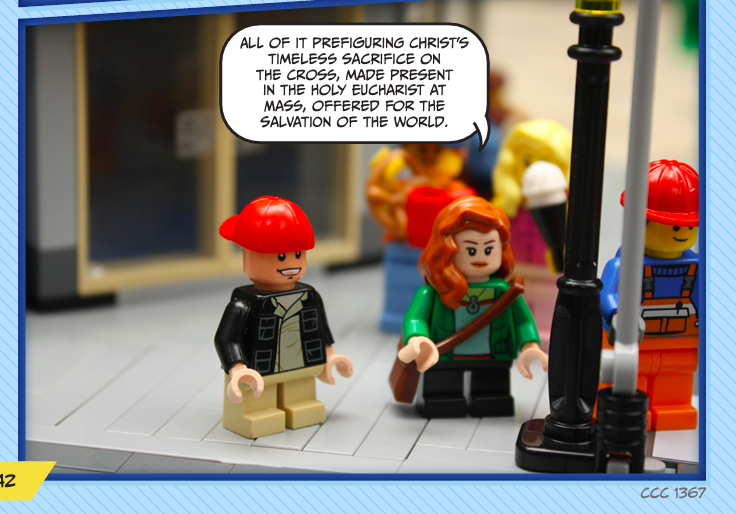 The New and Everlasting Covenant: the Holy Eucharist

Why do we attend Mass on Sundays? What is the consecration, and why do we believe? The New and Everlasting Covenant uses typology to explain the Biblical basis for the Eucharist and its role as God’s new and everlasting promise to us, tracing the various covenants all the way to the ultimate promise God made through the Mass and the Eucharist 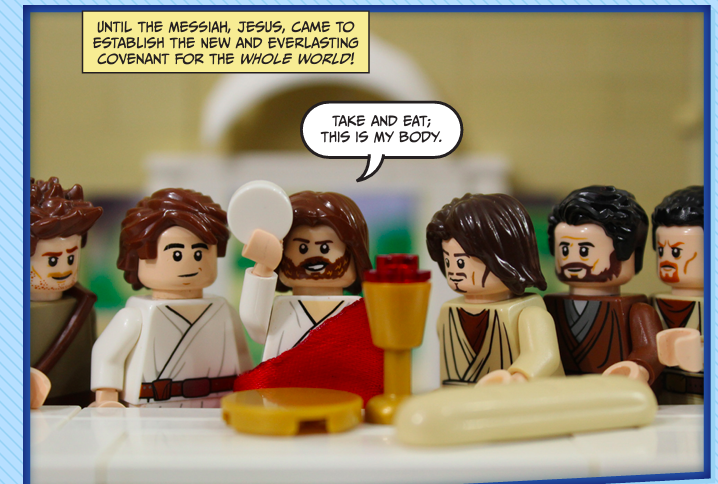 The Exodus and the Mass: Our Path to Heaven

We celebrate the sacrifice of the Mass with specific words, rites, and rituals. But why do we do that, exactly? In The Exodus and the Mass, Fulton and Cynthia connect the events surrounding the Israelites’ flight from Egypt and their forty years in the desert to the Liturgy of the Word and the Liturgy of the Eucharist. 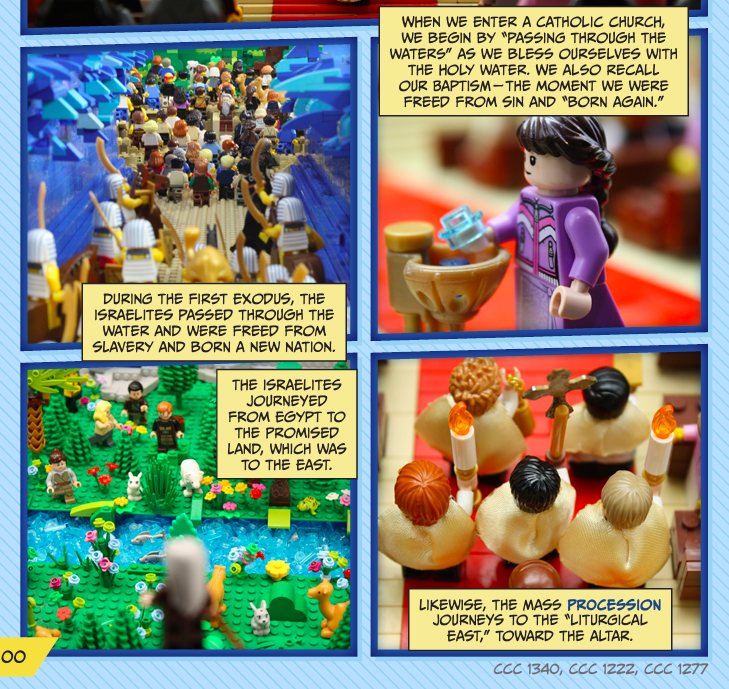 This section of The Holy Mass introduces a new character, Fr. Joshua. 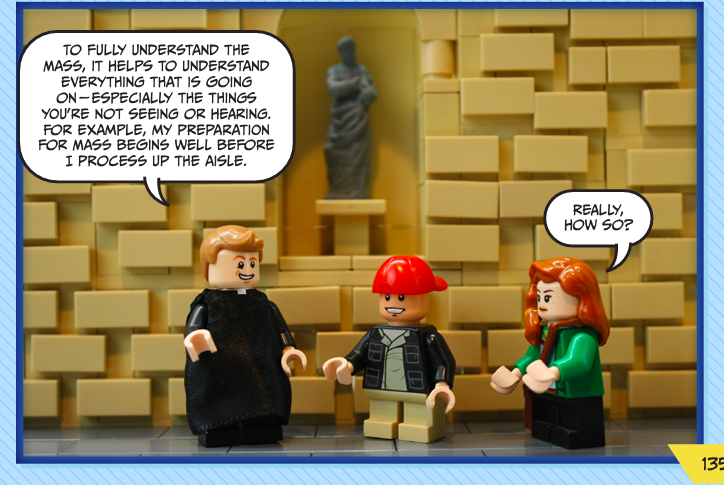 Fr. Joshua explains how a priest prepares for Mass, why he wears certain vestments, what the sacred objects on the altar are and why he uses them, and more – each one connected to the Old Testament via typology. 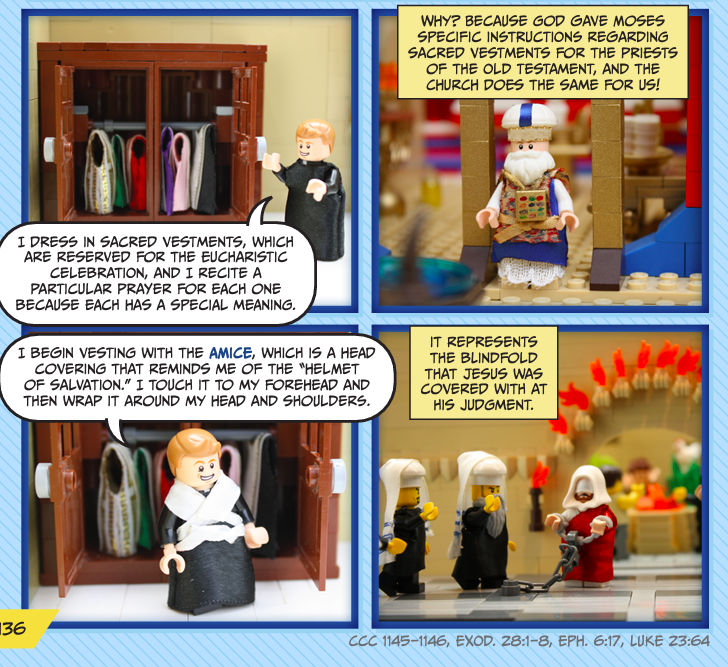 The Holy Mass: the New Exodus

As the second to last section, The Holy Mass: the New Exodus serves as a visual review of the connection between the Old Testament and the parts of the Mass. I really appreciated the emphasis on the meaning of every detail, that no part of the Mass is random or arbitrary. 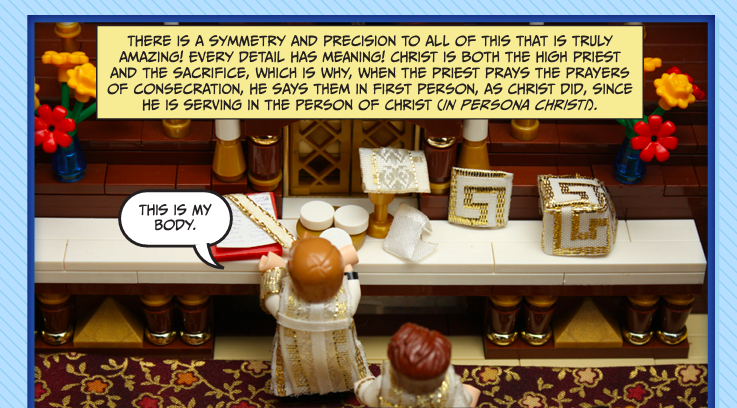 This final section reviews the many ways in which the words of the Mass are taken directly from Scripture: 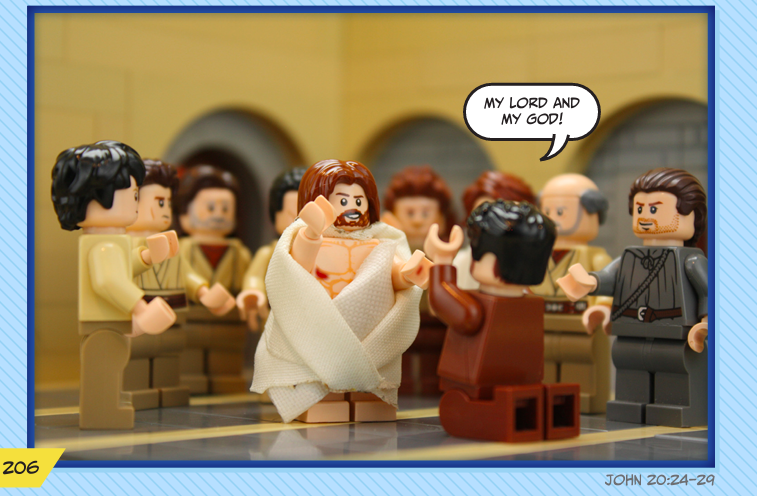 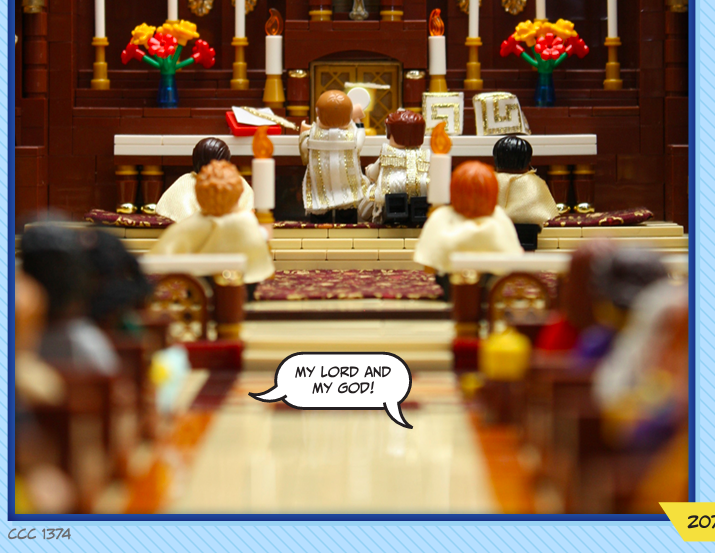 Why is The Holy Mass On Earth As It Is In Heaven  perfect for bright, inquisitive kids who want to understand the purpose and meaning of the Mass? 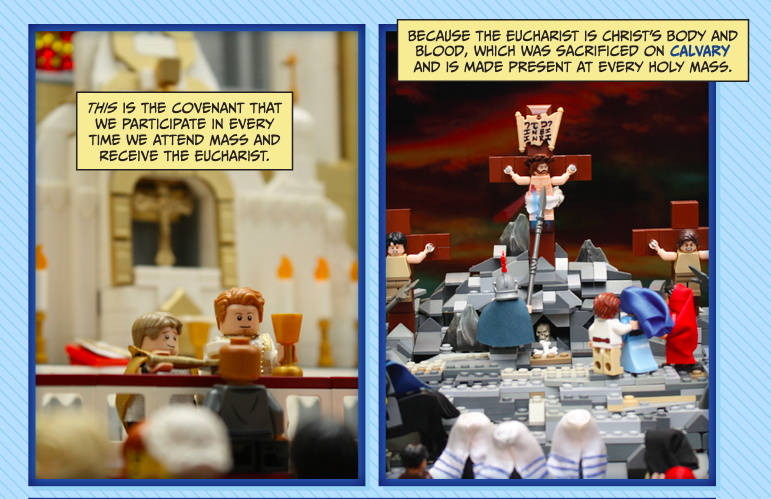 The topics are deep, but the explanation is accessible. Every panel is easy to read and understand.

The book is long, but the photos and the formatting make for easy reading. The amount of detail and creativity in the photos keeps everyone focused and the brief sections of text make it easy to read and ingest.

The are many connections to be made, but the intermittent review and occasional repetition prevent confusion. While you can go back to review specific sections or topics, it’s not necessary because they’ve sprinkled it throughout. 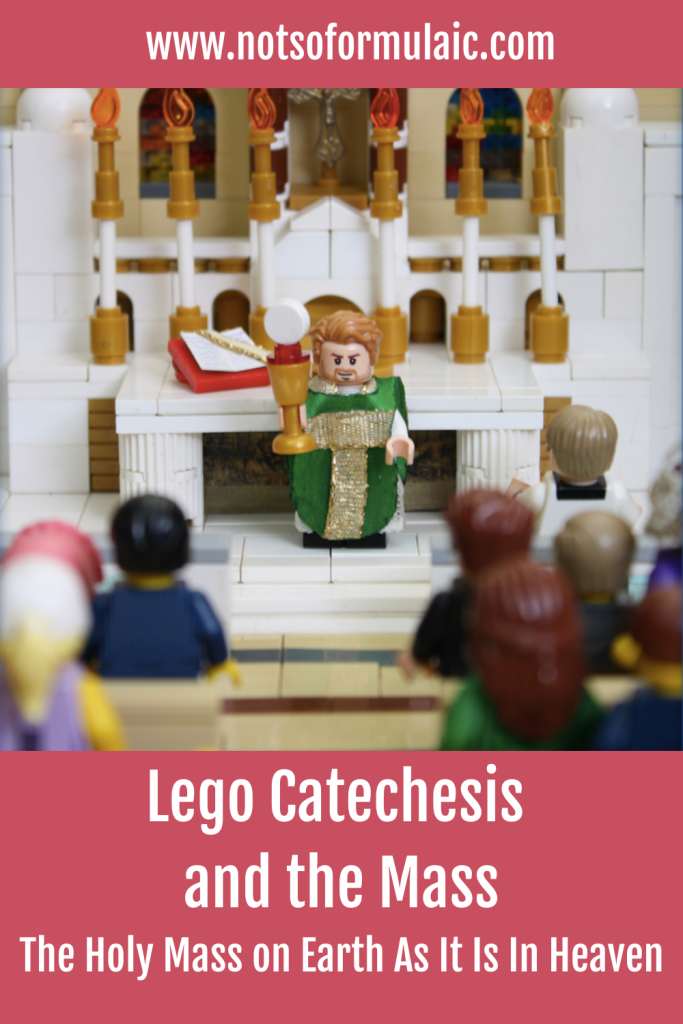 Other touches I appreciated:

Citations for Scripture and the Catechism are printed below the corresponding photos. This is especially helpful if you have a child who wants to go to the source.

A number of saint profiles are included in the text, from St. Athanasius to Padre Pio and others. These sections focus on their love for the Mass.

The book includes a discussion of Eucharistic miracles, an excellent point of reference for kiddos who find empirical evidence.

So. About this guy: 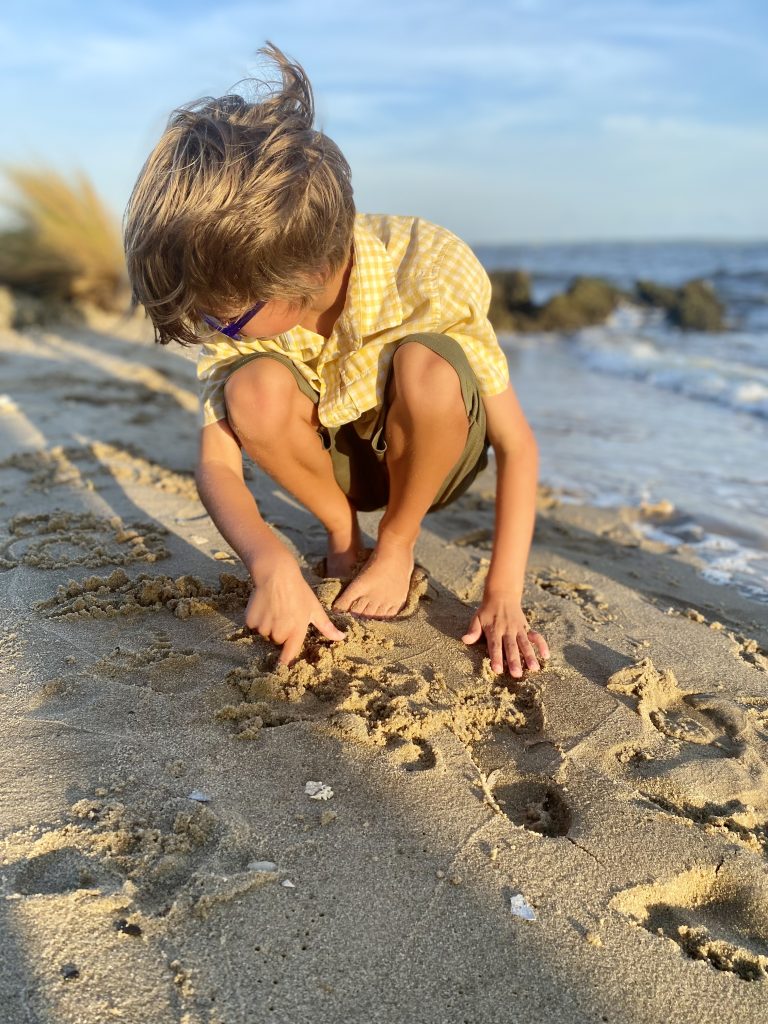 Yes. Mass is hard for him. But as soon as we get our hard copy of The Holy Mass on Earth As It Is In Heaven, he’ll have a solid, accessible resource to help him understand why we’re doing what we’re doing.

I’ll be honest — it’s a balm for the soul of this mother, raising this exceptional differently-wired kid.

If you’re raising a child who struggles with Mass or wants to know the hows and whys behind it, The Holy Mass on Earth As It Is In Heaven is absolutely for you. Pre-order your copy now through Upon This Block and enter code Formulaic2022 for free shipping — they will ship in early October, just in time for Christmas.

Lego Catechesis: The Catechism of the Seven Sacraments

To Hear His Voice: The Mass Journal for Catholic Kids

has the answers you need 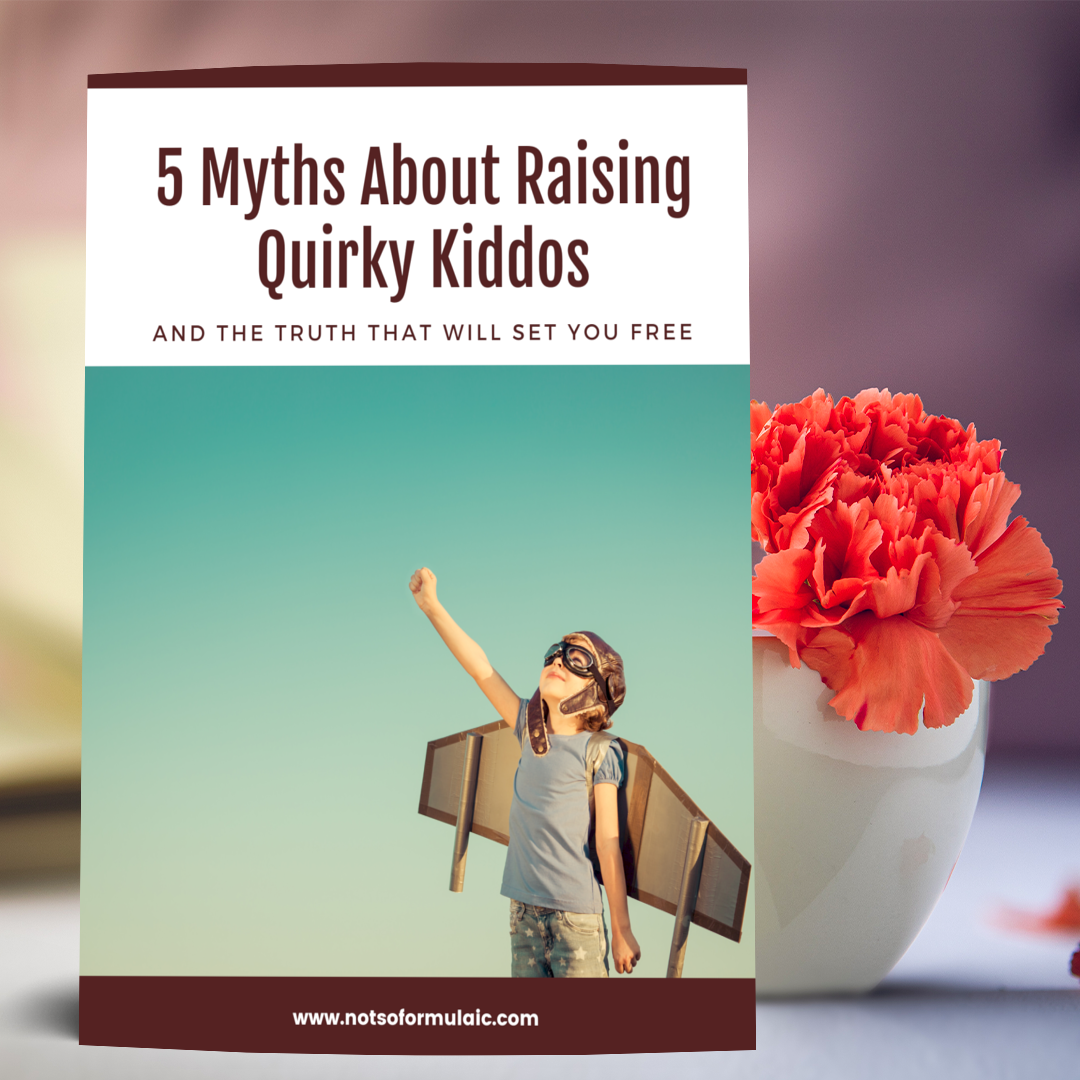 And join this growing community of moms like you. I promise you'll be glad you did.