Letter writing is a valuable life skill, one you definitely want to teach your kids. in this week’s installment of Life Skills Bingo, Kristi from Hail Marry  shows us how to use Dear Mrs. LaRue as a springboard for letter writing.

I’ve always been a fan of letter writing, and it’s a life skill I want to pass on to my kids. Turns out my friend Kristi feels the same way! Kristi and her daughter, Little Miss, share a mutual love of letter writing and journaling – so much so that they started their own Mommy and Me notebook! Kristi’s taken that love one step further with a fun-filled activity based on Mark Teague’s Dear Mrs. LaRue. 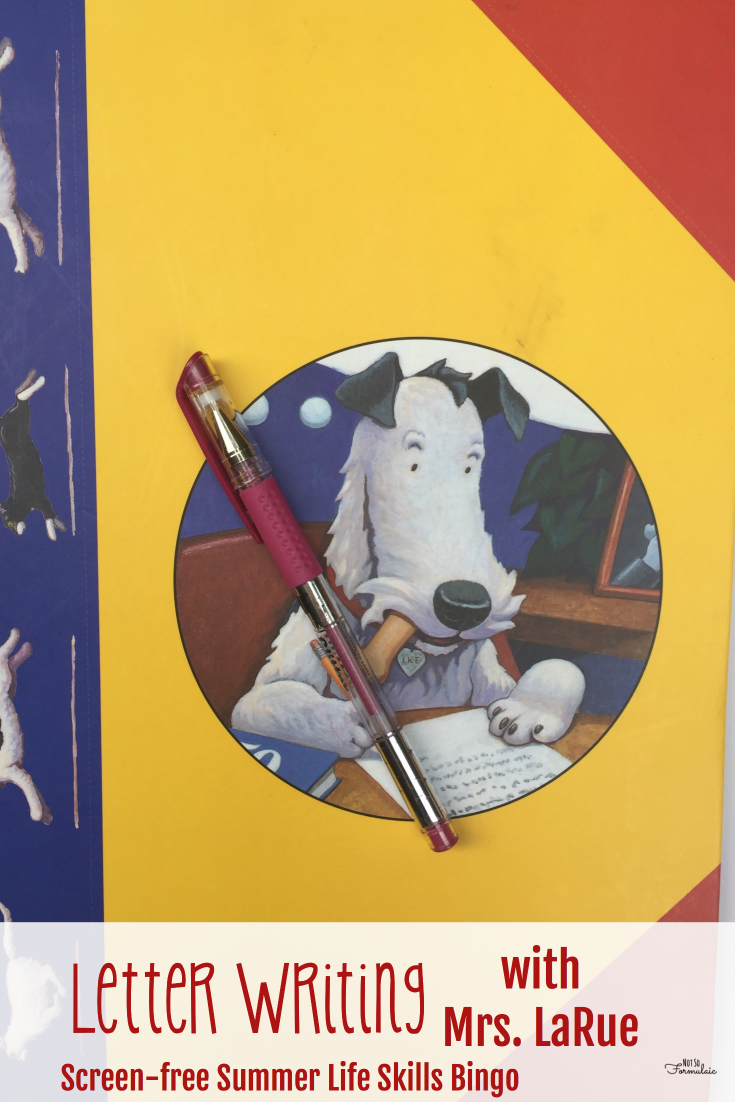 Little Miss is pretty ambitious. She loves to read (and has set a summer goal for herself to begin the school year on a sixth grade reading level) and, inspired by Ginny Kochis’ Lenten Letters of Love, we took a Scholastic Book Fair journal and made it a “Mommy and Me” notebook. We took scrapbooking stickers and personalized the cover and inside pages.

She adores writing me little notes…

…and receiving them from me.

It’s pretty awesome. But did you notice that her “letters” to me aren’t in the standard letter format? I know that she’s gotten an introduction into this in school, but just as spelling patterns tend to do for her, it’s yet to stick.

As a former teacher, I totally get that she needs repeated instruction in order to achieve mastery. I also know that she’s going to pick up more easily on something that she sees modeled at home.

So I decided to teach her how to write a proper letter using a delightful and funny children’s book by Mark Teague called Dear Mrs. LaRue Letters from Obedience School. Here, read the summary from the inside book jacket cover.

Y’all, this book is just adorable. It chronicles the tales of Ike LaRue, a spirited and spoiled dog sent off to obedience school through newspaper clippings, illustrations, and short (perfectly written) letters from Ike to his owner, Gertrude. The illustrations are wonderful in that they show the actuality of the situation in color contrasted with Ike’s portrayal in black and white.

Read the book to your sweet baby. Or read it with your baby. Or have your baby read it to you. In our case, Little Miss and I alternated pages. Make sure that while you read, you point out the date, salutation, body, and the closing/signature (Little Miss was able to tell me each part of the letter.). As you go into the book, you can also discuss post-scripts and post-post-scripts.

Discuss the story (you should have plenty to discuss), creating a brainstorm list together as you discuss. Ask questions like what things did you liked the most about the story? Which part was your absolute favorite? What do you think Mrs. LaRue thought about Ike’s letters? Feel free to refer back to the book—this is an excellent aid in retention and comprehension.

Using this as a springboard, have your child make up a situation similar to Ike’s. You can write it down or talk about it. We chose to talk about it. Little Miss said that she wasn’t behaving for ten years, so I sent her to military school. She’s got a great imagination. She added, “Well, I didn’t want it to be the school with the nuns, ‘cause that would be fun!”

Have your little love write a letter to you from the situation he/she just described, modeled on Ike’s letters. Little Miss decided that she’d enlist the input and advice of Superman on this one, too, although he’s unfamiliar with the story, so he ended up offering very little help. As you can see, she (like Ike) tends to be melodramatic, too…

This is a fun way to get the kiddos in your life to be exposed to letters in literature and in practice. Literacy is so important, and family literacy is one way to make it lasting. This activity is all well and good, but it isn’t an actual letter, so here are a few ideas to take this lesson and apply it to real life. 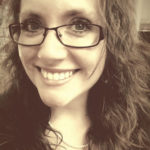 Kristi Denoy is an office manager and HR guru by day, co-founder of Hail Marry by…every other time. She’s a mom, a wife, and a nerd at her core. She loves tea, books, theatre, and mom-and-pop coffee shops. You can check out her thoughts and musings at www.hailmarry.org, or visit Hail Marry on social media: Facebook, Instagram, Twitter, and Pinterest.

Did you enjoy this post? Want to join in the fun? Check out the details here and play along!