Want to raise a mighty girl? How about a mighty Catholic girl instead? Here are 4 amazing truths the Catholic church teaches are daughters about life, love, and their ultimate self-worth.

14 years ago, a household name in skincare launched an unorthodox campaign. They featured women of all ages, shapes, sizes, and backgrounds in print and online media. The goal? To shift social perceptions of beauty in addition to increasing sales.

It campaign worked – consumers and competing brands took immediate notice. The ads went viral before going viral was a thing. But the Dove Campaign for Real Beauty wasn’t finished with its first wave of publicity. Four years after its initial founding, the company commissioned two surveys of girls ages 8-17. 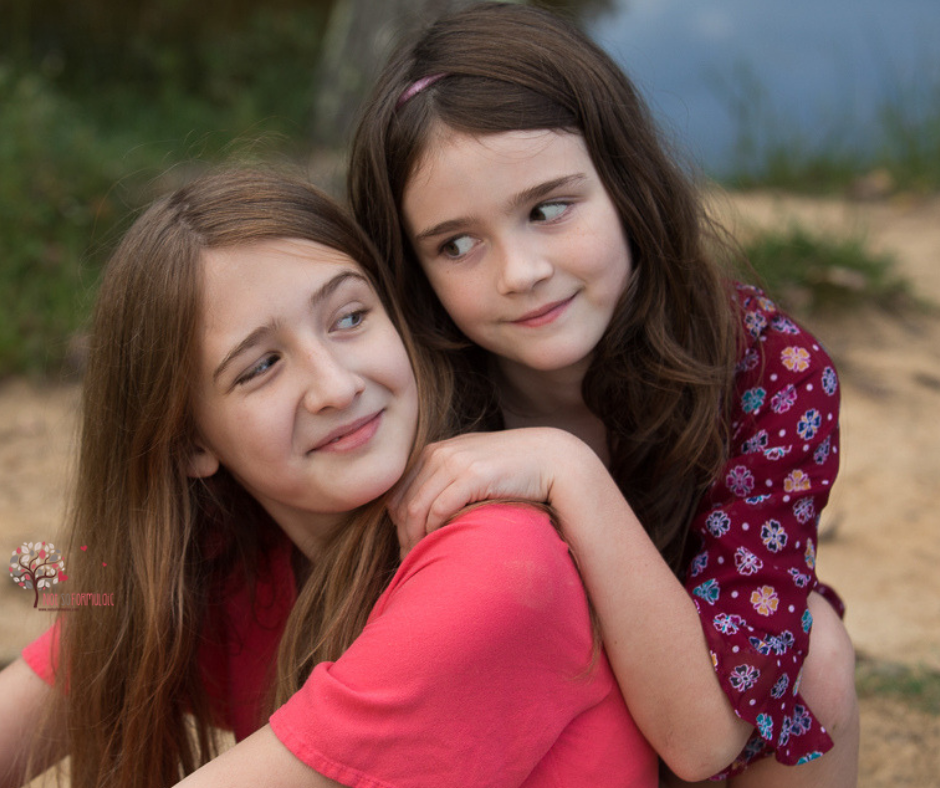 “The Dove Self-Esteem Awareness Measurement was developed to provide an indicator of self-esteem encompassing an overall sense of self-acceptance, confidence and emotional orientation among American girls. Each girl surveyed was assigned a score based on how she rated herself in each of these areas. Based on their individual scores, girls were classified into three groups: high, average and low self-esteem.”

The results were pretty stark.

Seven in 10 girls believed they were not good enough or did not measure up in some way.

Seven in 10 is not a small number. What’s more, they are engaging in harmful and risky behavior as a result of it, hurting others as well as themselves.

The Truth About Secular Feminism

Our girls are struggling. They are up against a destructive societal doublespeak, one which encourages “empowerment” at the cost of dignity. Buying into the secular feminist zeitgeist doesn’t make our girls stronger or more prepared. Rather, it feeds the negative self-concept by grooming young girls for their version of sexual freedom.

Secular feminism suffers from a grave misunderstanding of the nature of femininity. It holds that women are no different from men and that by the very nature of their genetic and biological makeup, they are somehow flawed. Groups like NOW and the Feminist Majority Foundation advocate for an end to violence against women, completely ignorant of the fact that their ideologies objectify our girls.

Secular feminism is a wolf in sheep’s clothing preying on the innocent. The best way to protect our daughters is to raise them as Mighty Catholic girls.

As a woman, your body is perfect

“You created my inmost being; you knit me in my mother’s womb.”

Women are powerful. We have the ability to create and sustain life, not only as biological mothers but as spiritual mothers as well. The ability to nurture and support those around is hardwired in our brains. Our bodies are made to reflect that receptivity. Taking steps to deny or remove that aspect of our womanhood objectifies the female body under the guise of empowerment.

Our girls deserve better than a culture that denies how they were made.

For parents: Beyond the Birds and the Bees; The Theology of the Body

As a woman, your soul has influence

“A woman who works for God cannot be conquered.”

Popular culture depicts the Catholic church as a patriarchal society hellbent on keeping women down. This couldn’t be further from the truth.

Stop for a moment and considered some of the most prominent, educated, and influential women in history. Edith Stein. Joan of Arc. Gianna Molla. Catherine of Sienna. Christine de Pisan. Alice von Hildebrand. These women are powerful role models not just for the capability of the feminine genius, but for the role of women in the Church. Even male theologians and philosophers have written widely on the valuable impact of women on society: Pope John Paul II and Archbishop Fulton Sheen to name two.

The truth is, the Church has always recognized the incredible importance of women in society. God has given our daughters a privileged place in human history.

As a woman, your refuge lies in the Truth

I am a firm believer in guiding our children to the truth not through rote memorization or authority but through critical thinking and discovery. By reading the Catechism, studying Scripture, and discovering the reasoning behind our faith, our daughters will begin to see that three fundamental truths:

These are the fundamental truths that build mighty girls.

Catechism of the Seven Sacraments

As a woman, you don’t ever need to settle for less than what you are worth

God’s will is perfect, and every woman on this earth has a unique, undeniable purpose. The same is true for our girls. From the moment of conception, each of our girls was designed for a particular journey only she can fulfill.

Be Yourself: A Journal for Catholic Girls 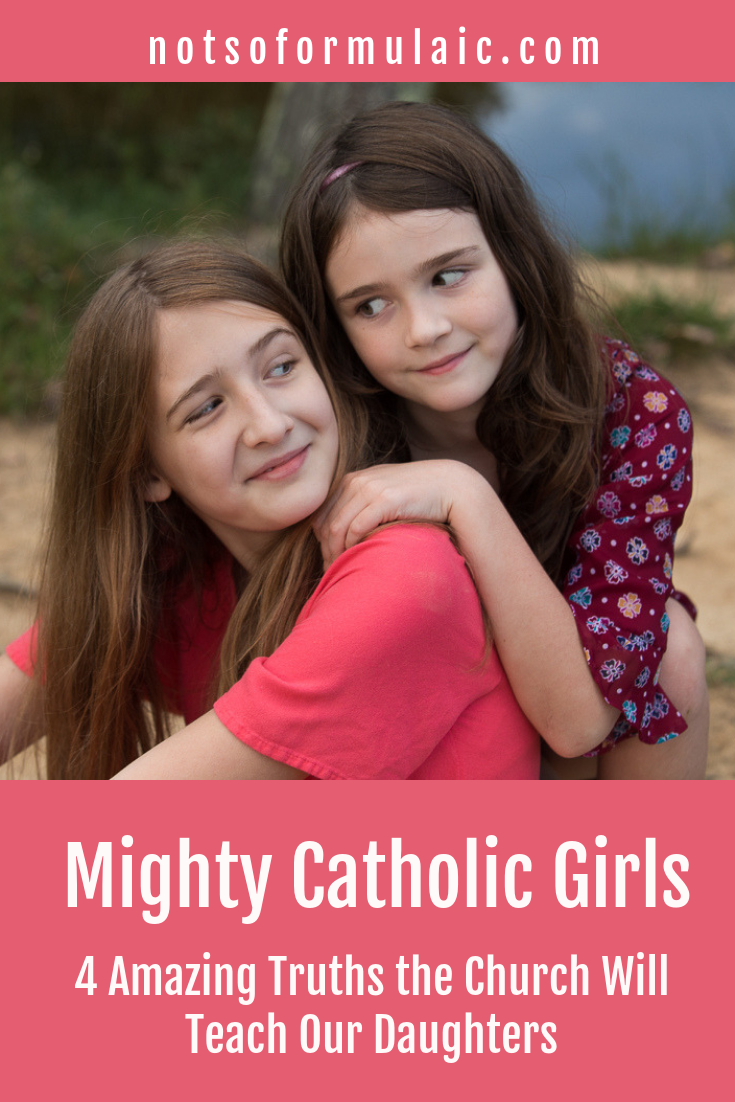 When I was in the fifth grade, I found a hand-drawn picture of myself in the classroom trashcan. It was not a flattering portrait, nor was its placement an accident.

I had a perm. I wore glasses with pink and blue tint on the lenses. And I was allergic to the mold in my elementary school’s building, so I spent a lot of time blowing my nose.

And walking to the trashcan.

I don’t know who did it or even why they thought it was a good idea. But there it lay, face-up and displayed for my edification, so I would see it when I went to throw my spent tissue away.

I froze. It was obviously me – the glasses colored with pink and blue highlighter; the area under my nose colored in neon green. Tears pricked my eyelids but I pushed them back to where they came from. No way would I let them see me cry.

That moment was intended to cement something in my psyche – that I was somehow flawed or not good enough. But in reality, all it did was confirm my worth as a child of God the Father.

I was made in his image and likeness. A stupid line drawing wasn’t enough to dissuade me from that.

In a way, secular culture is like the bully in the classroom. Its goal is to shake our daughters’ confidence and sell them lies that pave a pathway to distorted truth. Fortunately, the Catholic Church and her teachings holds our daughters in a place of honor.

Let’s make sure we teach them the real and holy Truth.

Pop culture Wants to Eat Our Daughters. It’s Time to Tell it No

I’m Teaching My Daughters Fertility Awareness. Here’s Why I Think You Should, Too

I Am a Catholic Woman. Here’s Why I Love My Faith