Teaching writing can be scary for homeschooling parents, especially if your kids are differently wired. But with a program like Night Zookeeper – an engaging, interactive web-based writing program for children ages six to 12 – you’ll not only have the support you need to teach grammar and composition well; you’ll also have a kiddo who develops a lifelong love of writing.

Already heard of Night Zookeeper and want to get started? Click any Night Zookeeper link in the post for your free 7-day trial and get 50% off your annual subscription. This post was sponsored by Night Zookeeper. While I was compensated for my time, all opinions are my own.

It’s easy to feel unsure of yourself as a homeschooling parent. It’s a catch-all career, really, one in which no matter your life or collegiate experience, you’re bound to come across a subject that gives you nightmarish teaching thoughts. 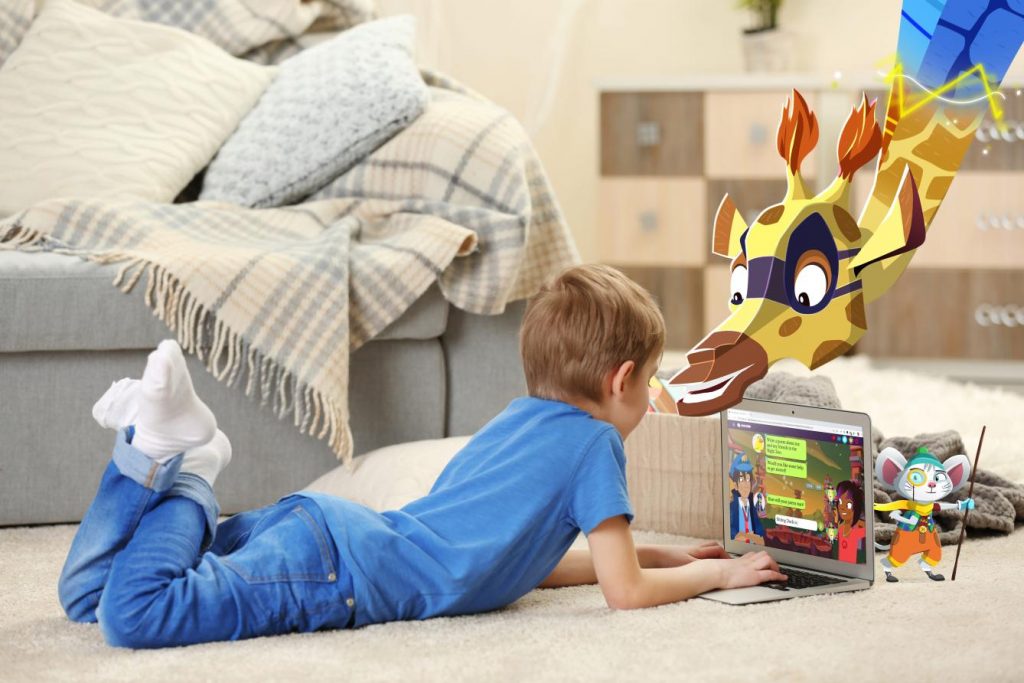 Take writing, for example. It should be simple, right? Kids are creative. They love imaginary play and telling stories. But fostering that creativity and helping them transfer it to the page are two different things entirely.

Teaching writing can be scary for homeschooling parents, no matter the age or developmental level of your child.

Add to all these reasons the writing difficulties faced by differently-wired kids, and you definitely have a conundrum on your hands. Chances are, you’re raising a child with great intellect and imagination who struggles to get words on the page to begin with, whether because of a learning disability like dyslexia or dysgraphia, an emotional struggle like imposter syndrome or perfectionism, or a total lack of interests in topics that aren’t a part of your child’s current interests.

Never mind raising a Pulitzer Prize-winning phenomenon: how are you supposed to teach that child you love to distraction to write a legible sentence for his or her first job?

I’ve always said you don’t need a writing curriculum, and I stand by that still. But it’s nice to have an engaging option for days when you’re feeling less than confident in your own abilities. Because the truth is, there are skills your kids will need to learn whether you use a curriculum or teach more organically. And frankly, it’s reassuring to have an objective source to turn to when you and your children need it. Night Zookeeper is the perfect option for this as a stand-alone curriculum or as a supplement when you are teaching writing at home.

What is Night Zookeeper?

Night Zookeeper is an award-winning creative writing program for children ages 6-12+. The goal of the program is to inspire a lifelong love of writing in children while fostering strong writing skills. The program progresses according to age and ability: where younger children focus on skills like capitalization and beginning punctuation, older children will encounter more advanced grammar and composition skills. And because the folks at Night Zookeeper understand that skill and ability don’t always correspond with a child’s developmental age, the parent dashboard allows you to adjust the difficulty of your child’s lessons.

It’s fully customizable and under your control.

How does Night Zookeeper work?

Through its engaging storyline and exciting visual interface, Night Zookeeper

All set within an imaginary world where your child’s illustrated creations star in content across the site.

When your child first logs in to Night Zookeeper, she’ll be introduced to the story of The Night Zoo and prompted to create her first creature. Your child will be prompted to name her creation and decide its talents and characteristics which are then displayed on the creature’s character card. These talents and skills can be updated as your child’s skills develop: reaching certain skill benchmarks open up the opportunity for added character skills.

As the lessons and gameplay continue, your child will be prompted to collect or create additional characters (students are encouraged to share their creations with Night Zookeeper community so other children can adopt their characters and level up on their own). Once collected or created, each creature lives in a designated spot on the zookeeper map. Successful completion of games, challenges, and writing activities level up each character and, with them, the learning opportunities provided.

The process is engaging, challenging, and fun.

How does Night Zookeeper support parents?

Night Zookeeper supports parents and home-based writing instruction in a number of ways.

Not comfortable in your ability to teach grammar? Games like Waterfall Word Jumble teach sentence structure; Challenges like Beaver’s Blanks and Eek’s Word Code teach parts of speech. And as your child’s skills move beyond the basics, the games and challenges do, too.

If reviewing your child’s grammar and composition work brings back memories of enough red ink to make the paper look like its bleeding, fear not: Night Zookeeper employs private tutors who do the reviewing for you, encouraging your child’s strengths and prompting development in areas of growth.

In addition to the games, puzzles, and challenges available to your child, Night Zookeeper offers video lessons with direct, engaging instruction. From phonics and sight-word building in Night Zoo Spelling to descriptive writing and characterization in Describing Characters with Maji, your child has access to a wealth of expertly crafted and guided lessons at her fingertips.

It’s no secret that some kids (and parents, for that matter) don’t like to write. But Night Zookeeper takes the pain out of the process: an engaging storyline, fun non-player characters that act as guides, and creative, exciting games leave your children begging to play Night Zookeeper for as long and as often as they can. 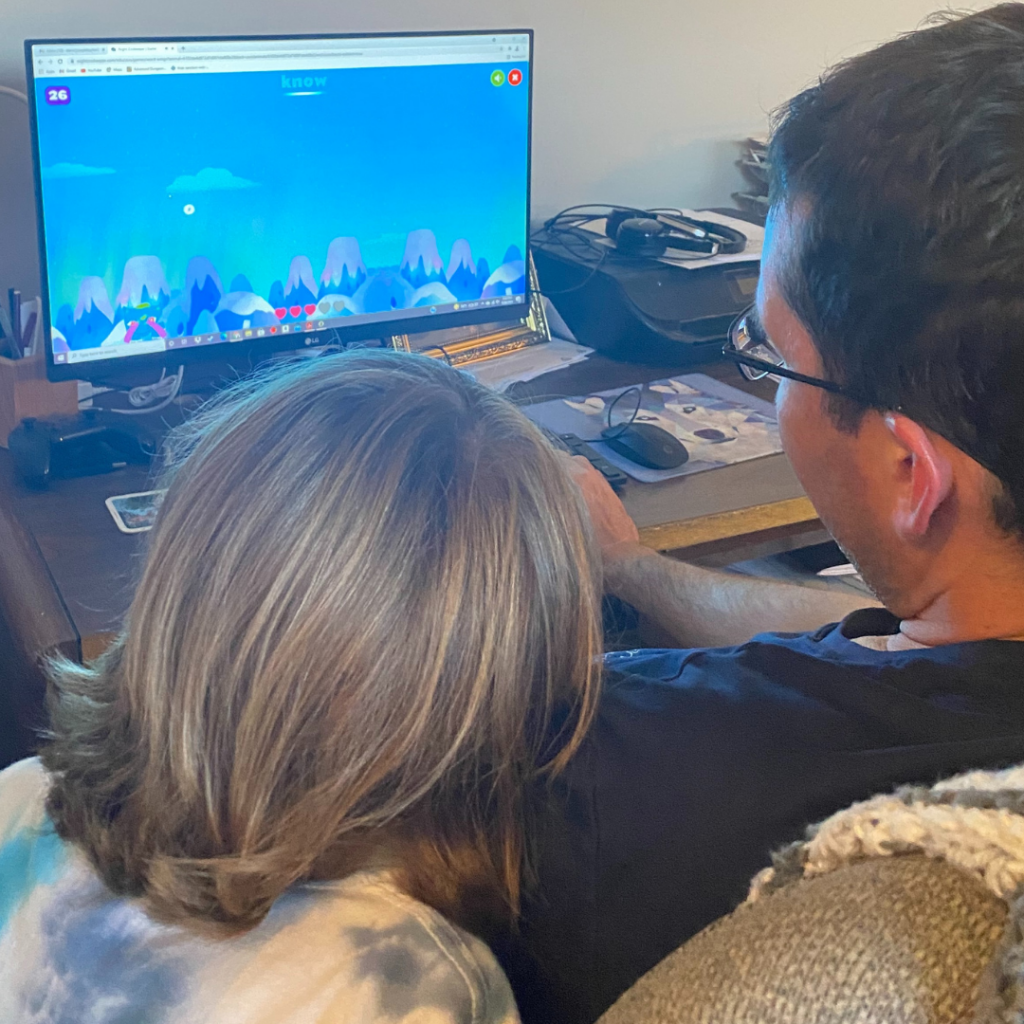 Night Zookeeper aids in the process of moving from idea to final product.

Differently-wired children have fantastic imaginations, but developmental and/or learning differences can make putting words on paper a chore. Night Zookeeper offers gentle prompting and encouragement at each step of the way: students are always asked at the beginning of a writing activity whether or not they want help getting started, and if they do, Night Zookeeper asks questions, provides examples, and makes suggestions to help students get their thoughts down.

Impostor syndrome, anxiety, and perfectionism can hold back progress in differently-wired children. I’ve been most impressed with the kind, thoughtful, and encouraging feedback my son has received from Night Zookeeper’s private tutors: the responses highlight what was done well, then gently suggest ways to improve the piece. Additionally, if you and your child are comfortable with it, Night Zookeeper allows students to submit their writing for community-wide review. With this option, other students around the world can read and comment on your child’s writing (comment guidelines are clearly spelled out).

Ever tried to get your kiddo to write about something he has zero interest in? Yep. Me, too. And it’s not fun, is it?

The great thing about Night Zookeeper is the type of prompts and contest opportunities offered. My son has the chance to write about things he really loves (Pokemon, which he drew and created inside the game as the creatures he wanted to collect) and, if he likes, get involved in healthy competition with other students in the game.

Competition can be a sticking point for children who don’t thrive in that type of environment. But in Night Zookeeper, the element of competition is wrapped in a supportive, cooperative attitude. Not only are students able to write alongside other children, they’re also able to learn and practice social skills as they interact with one another online. 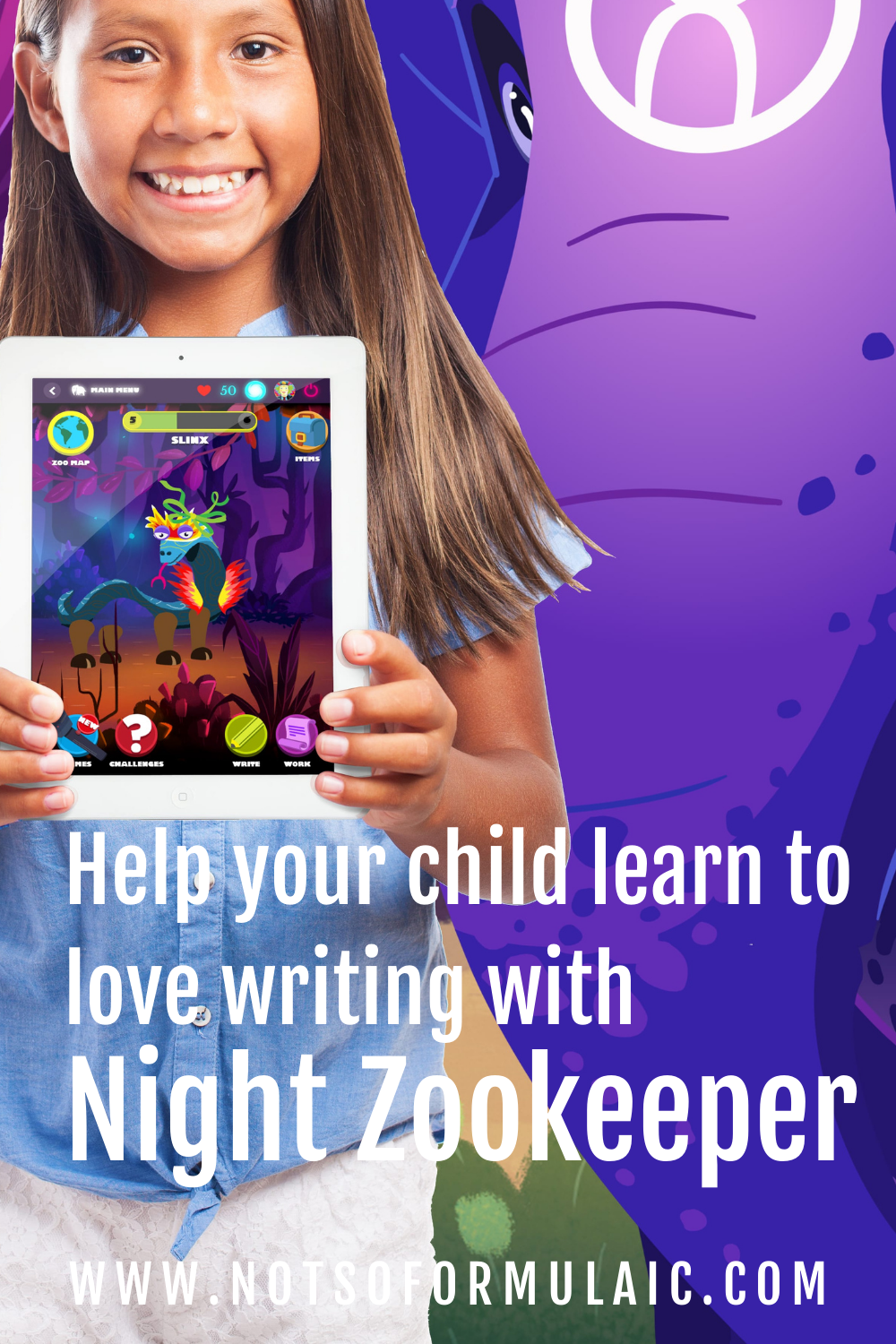 So, if you’re the parent of a differently-wired child age six to 12+, and if you’re looking for a program to support you in your efforts to teach that kiddo grammar and composition, Night Zookeeper offers:

And right now, you can use this link to get a 7-day free trial and an annual subscription for 50% off:

Have more kids? You can add them at a custom price set just for you.

While it’s true that you don’t need a writing curriculum to teach writing, having a support system like Night Zookeeper takes so much stress off your plate.

Whether you use the program as a stand-alone curriculum or as a supplement, Night Zookeeper is a fun, creative, professional way to help your child foster a love of writing and be a strong writer for life.