Perception is rarely reality, especially when it comes to gifted kids. The behaviors we see as annoying are often normal gifted development. Here’s how to navigate the struggles gracefully without damaging your child’s spirit.

Several years ago, I was accused of abusing my two and a half-year-old daughter in the middle of a big box store. Said toddler was having a meltdown of epic proportions over a sparkly pink doggy purse.

Of course, I had to be pinching her. Why else in the world would she be wailing? 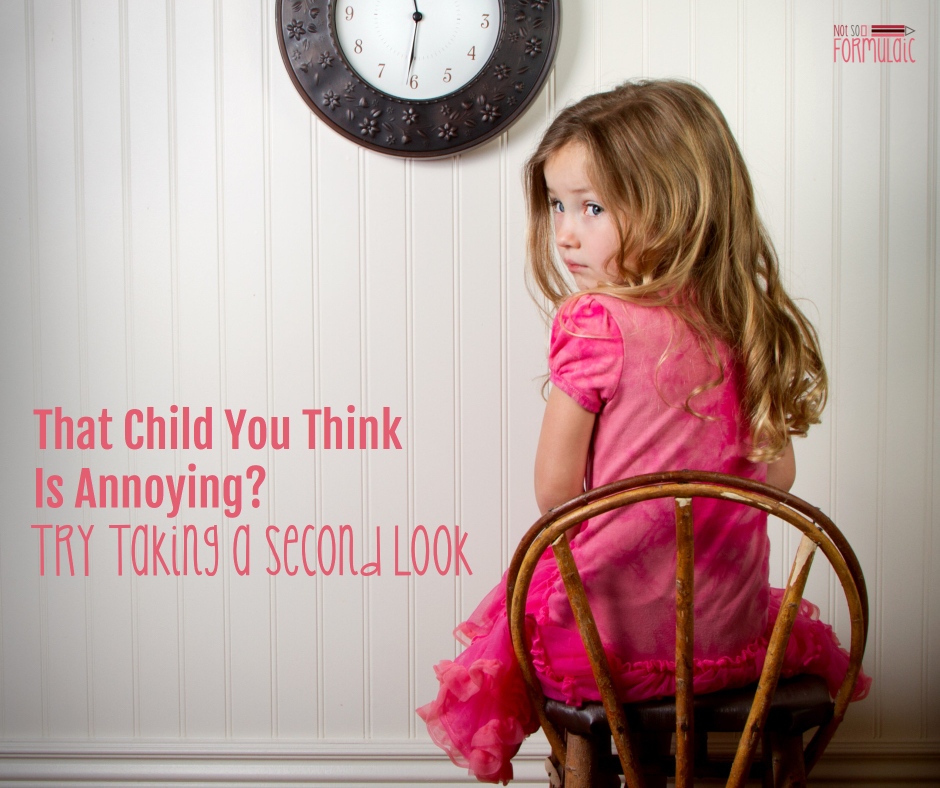 Aside from the obvious emotional trauma, I learned a valuable lesson that day. My own tendency toward appraisal and judgment was neither helpful nor accurate. How many opportunities had I missed to give the benefit of the doubt to someone in need?

I began to look at the world from a completely different perspective, applying this new-found wisdom to situations I encountered every day. It wasn’t a difficult transition: my own daughter was having a hard time in kindergarten.  The adults in her life – myself included – made snap decisions at every turn.

When a child’s behavior appears problematic, it is not because the child is flawed. Rather, that behavior is a mode of communication. Gifted children are especially vulnerable to these negative assumptions. With these kids, appearance rarely matches reality.

Why Perception and Reality Matter When You’re Parenting Gifted Kids

What it looks like: A nosy child who can’t mind her own business

What it is: Insatiable curiosity

I live in a close-knit cul-de-sac. In warmer months, it’s not uncommon for doors to be left open and for a bevy of kiddos to be playing in the streets. It’s kind of like Lord of the Flies but with adult supervision.  We all look out to make sure the kids don’t kill each other, and the kids come back good and dirty at night.

One of the children on the block is a feisty kindergartner. She has a habit of walking into houses unannounced. Once she finds you, you’re cornered for several minutes:

What are you doing?

Where did you get this?

What is it for?

At first I was a little irritated, and to be honest – a lot of my neighbors were, too. But I began to see similarities between this kiddo and my sensitive, curious daughter. If she’s awake or within a five-mile radius or an adult conversation, she absolutely has to know what’s going on.

Gifted children are intensely curious. They want to know the truth about everything, and they will ask you until you can’t go on anymore. At home, we can suggest they dive into research to find that answer. Out in public, though, it’s another matter entirely – one of learning when to ask questions and how much.

If you encounter a child who asks millions of questions (or if you’re raising one and waving a white flag), rest assured her inquiries are not meant to be intrusive; rather, they’re a sign of intellectual prowess and a desire to truly understand. Encourage the development of research and critical thinking skills by saying, “Let’s find out together,” or “What do you think it might be?” If the questions make you uncomfortable, be honest. Explain there are some things we don’t ask other people out of courtesy and work toward exploring those topics another way.

What it looks like: A rude child without social graces

What it is: Lack of a filter, with zero malicious intent

We’ve all had them. You know, those cringe-worthy moments when our children bust out with a comment that makes everyone blush? Maybe he called someone one out for a certain behavior or brought attention to a quirk or stated a painful truth without hesitation. Whatever the case, you’re scrambling for the next available hiding place shortly after he opened his mouth.

My oldest daughter lacks a filter. She’s developed a better one over the years, but for a while there it was rough. She would call it like she saw it even if calling it was unnecessary.

She had a difficult time maintaining friendships in early elementary. Other kids weren’t sure what to make of her comments or her tone.

While my daughter came across as rude or uncaring, that perception couldn’t have been further from the truth. Asynchronous development paired with a mind that was always busy meant an uncomfortable combination.

She lived completely within her own relational sphere.

This isn’t uncommon among gifted children, and it can cause them a great deal of emotional stress. It’s not just those around the child who are impacted by what was intended as a harmless comment. The child herself is troubled by the consequences, as well.

I’m a big fan of social stories even for children without special needs. They present social situations at varying developmental levels, allowing the child to observe interactions at an arm’s length. Through social stories, children can begin to learn appropriate social interactions and become more aware of how their comments and observations may be received. Following up with good discussion and a little bit of role play can make quite a difference, as can the development of internal checkpoint questions (“How will this add to the conversation from my friend’s perspective? Is this something I should say right now?’) they can ask themselves before they speak.

Be sure to stress with your child that their thoughts are always valuable and that they should never be afraid to speak. It is the way in which we use our words that matter, though, and everyone can learn to speak with charity.

What it looks like: A know-it-all kid with a superiority complex

What it is: Uncontrollable desire to learn and share

They’d been playing in the front yard for about 15 minutes when I heard a little squabble outside. The door flew open and in blew my daughters, red-faced and obviously perturbed.

“So Caitlin said one million is the highest number, and Gray told her that wasn’t true, because it’s not, there is no highest number, they go on forever, but anyway, everybody out there agrees with Caitlin and John said we’re just know-it-alls who don’t know anything at all which is dumb because you can’t be a know-it-all and know nothing but whatever…”

This incident occurred several years ago, but it was neither the first time it occurred nor the last. We’ve had corrections over the names of dinosaurs and debates about scientific classification – and not just with other kids.

Gifted children can come across as having all the answers, usually because they do. For these kids, the collection and dissemination of knowledge are like breathing. They can’t help it – sharing knowledge is part of who they are.

If your child is the neighborhood expert and frequently at odds with those who don’t understand, it can be hard to watch the social dynamic: shouldn’t our kids be able to share what they’ve learned when they want to, without facing social disdain?

Yes, they should, and we should always encourage them. But we must do so in a way that takes into account the social climate in which they exist. We don’t need to change or silence our children; rather, we need to help them learn how to share their knowledge through invitation: in other words, show them how to lead their peers to the right conclusion by asking questions and sharing possibilities.

These misconceptions are just the tip of the proverbial iceberg – I could add several more:

The child who seems to ignore your directions is the child lost in her own thoughts.

The child who appears sloppy and disorganized is the child who struggles with executive functioning.

The child who climbs walls, meltdowns, lashes out, and gets angry is the child who can’t yet verbalize what she needs. 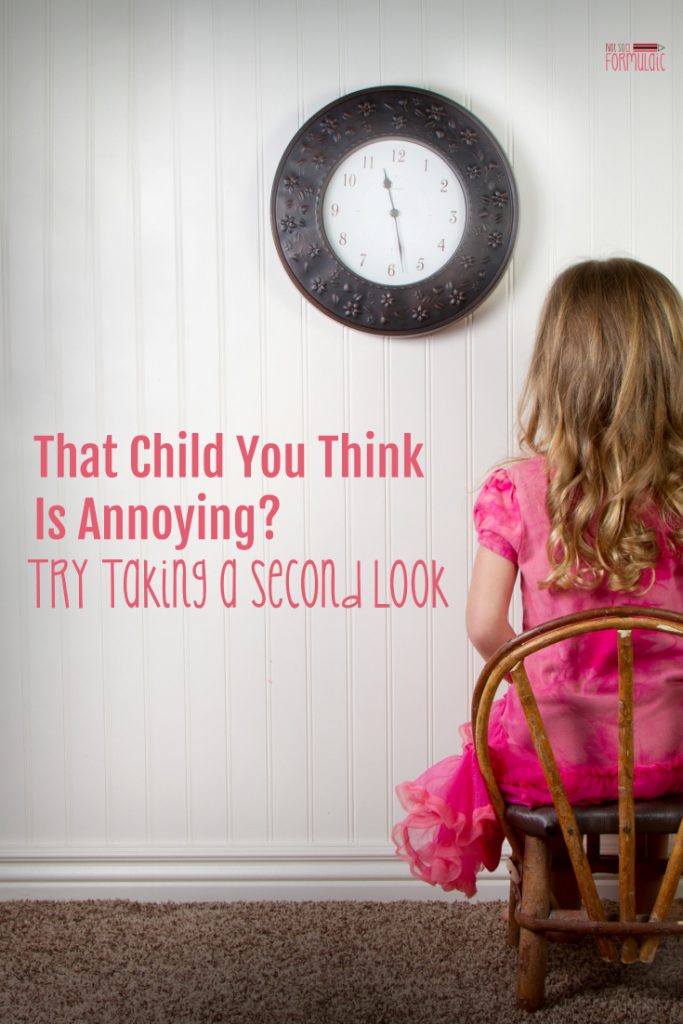 That day my daughter melted down in Walmart was one of the worst days of my life. But as I’ve so often discovered in my parenting journey, it’s the painful moments that bring the most insight and growth. While I wish that woman would have extended a gesture of kindness, I owe her a debt of thanks for the sea change it brought about. Her perception of the situation and its startling reality helped me shift my own thinking:

That kid I think is annoying, obnoxious, malicious, or worse? It’s time for me to step off my pedestal and take a second look.

That Kid You Think Is Annoying? Try Taking a Second Look. (Why Perception and Reality Matter When You’re Parenting Gifted Kids) 759362675

That Kid You Think Is Annoying? Try Taking a Second Look. (Why Perception and Reality Matter When You’re Parenting Gifted Kids) 1164344306