It’s easy to pray for miracles.  What’s hardest is to notice them, especially in the depths of grief.

I was three years old the first time my father had open heart surgery, a quadruple bypass that saved him from a widow maker.  My memory of that event comes from a photograph. We’re in a wheelchair outside the hospital’s main entrance, he with his trademark goofy grin and dark hair; me in a blue and white pinafore perched comfortably in his lap. This is the last time I would get close to him for several months.

My mother says I was afraid he would leave. I think I just knew it wasn’t over. 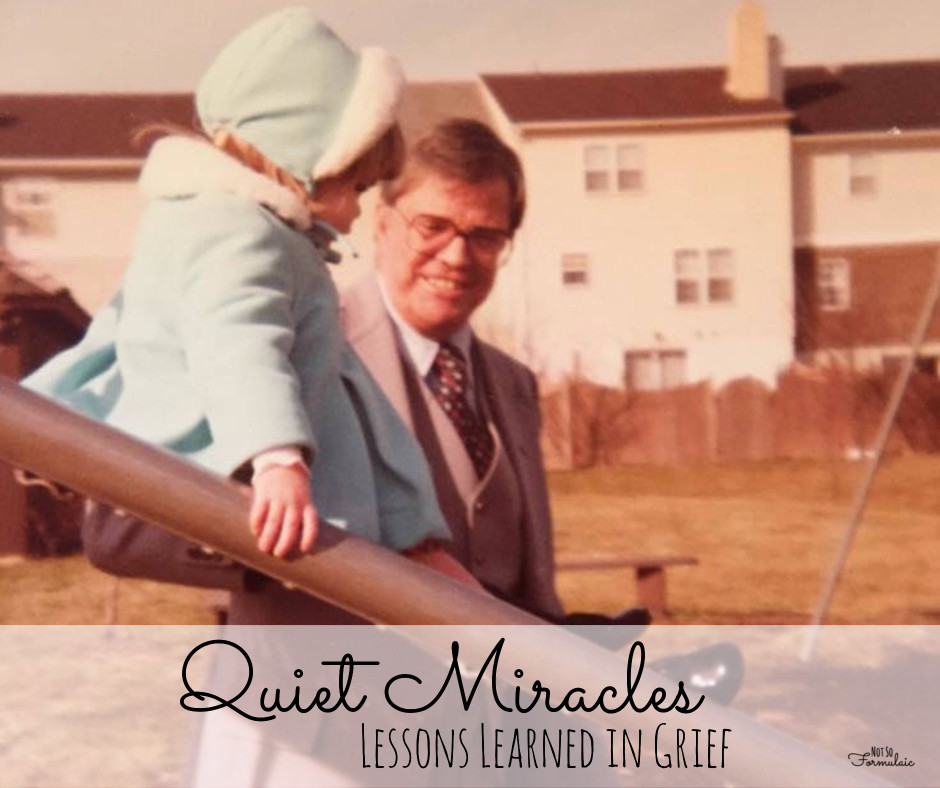 About every three years, Dad would have what I called an event.  Illness stopped sufficing as a label when his sickness stretched for months and left the whole family desperate for an IV.  But no matter how critical his condition, he’d miraculously emerge from the quagmire and return home, albeit a little more worn than before.  Our family was no stranger to miracles, and we believed that God’s hand had a clear role in my father’s inexplicable recoveries.  My perception of the miraculous hinged on this.  If it was not blatant, not overtly divine, it was not a miracle.

It began with a hip replacement at the age of 74.  What should have been a fairly routine procedure was a life-threatening issue for my father.  He had already had at least a dozen heart caths, four heart attacks, three pins in an ankle, two shoulder replacements, one open-heart surgery, and a near-fatal cardiac arrest.  So a hip replacement?  Big blood loss equaled a big deal.

My dad seemed to face the prospect with aplomb.  He would tell me, as he had many times before, that he hoped God would let him live long enough to meet all his grandchildren and read all the books on his reading list.

My hope was less noble.  I was a wreck: teaching full time, enrolled in graduate school, completely absorbed in my twenty-something self, and there were my parents asking what of Dad’s belongings I would want should he pass away.  Should he survive, my selfishness cringed at the prospect of hospital visits,  something I had managed to avoid nearly every other time he fell ill.

The hospital was hard to get to.  They charged for parking. And it had that smell – the antiseptic stench I associate with suffering and death.  I was terrified of losing my dad, but I was more angry that he had put me in this position.   I didn’t have time to drive 45 minutes in DC traffic, sit in a plastic chair, and look at my father hooked up to all manner of machinery.

But the stress of the hip replacement was nothing compared to the next hurdle.  He flew through it with relative ease, only to end up imperiled once again a mere eight months later.  That July, a scheduled knee replacement went haywire.  There were four more heart attacks and a second, complication-riddled open-heart surgery.  Doctors warned us he might not survive.

Staring death in the face changes people.  It changed me, as the selfish child I once was became an advocate overnight.  I was at his bedside nearly every day, watching the man who sent my nine-year-old form airborne from the neighborhood pool wilt under the mechanical beeps of a supported life.  I waited for my miracle, for the gift of more grandchildren and a dent in his reading list.

At first, it was a silent vigil, the medical hum intertwined with desperate efforts to pray.  But each day brought signs of hope.  First, he came off the ventilator.  Then he could sit up a little more.  Eventually, he could speak for longer periods without becoming winded.

My father and I grew closer over those long months, and as the trees changed colors outside his window, I came to understand his devotion to the Eucharist and his ardent desire for holiness.  I saw the gratitude he developed for his suffering, a small share in Christ’s victory on the cross.

Then, miraculously, he came home. 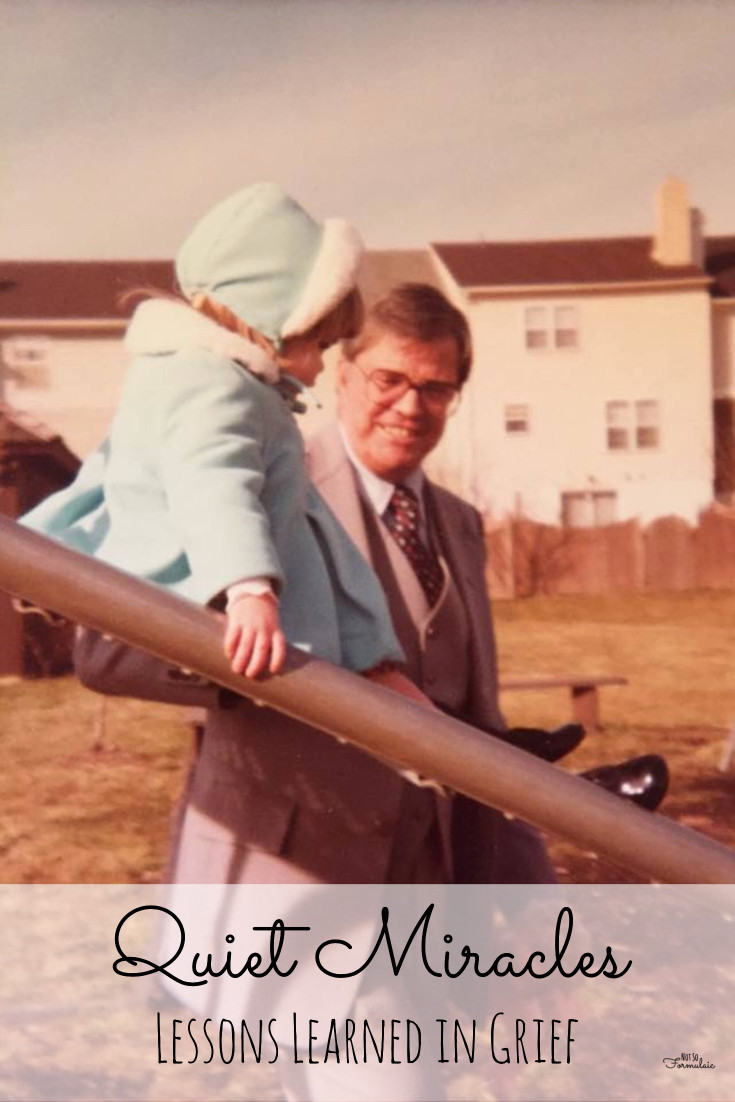 He was not whole, and yet the hope that our family would be remained intact.  Halloween came and went and as Thanksgiving melted into Advent, my mother, sister and I prepared for the birth of the Christ child.

My father, on the other hand, understood something we did not.

My father died at 4:15 in the morning two days before Christmas.  I woke at ten after four and wondered whether his heart was still beating.  There had been no phone call to alert us by the time my husband and I straggled out of bed nearly three hours later.  I clutched the pillow, eyes swollen, listening to my husband’s hushed tones as he spoke with the charge nurse.   I was unprepared for the ache that opened its giant maw and swallowed me whole.  I was tired.  I was hurting.  I was angry that this time, there had been no miracle.

Not all miracles are blatant.  Many are quiet, taking place in the secret spaces of the heart. Dad’s death was certainly the end – the end of his life, of my expectations of more time, of my reliance on immediately palpable, supernatural release.  But the ensuing years of my father’s passing have been far more miraculous than those peak and valley days of exultation and desperation.

There have been more grandchildren.

I have read more books.

I have changed and grown into a woman I know he would be proud of.

I see now that the grandest miracle of all came gradually, set in motion through a holy, happy death.

God’s thoughts are not our thoughts, and His ways are not our ways.  But they are by far the better of the two, if only we learn to listen.