Are you raising a strong-willed boy? Could you use a little heavenly help? Here are three saints perfect for strong-willed boys and the mothers who love them. (And you can click here to find the perfect patron saint for your child).

I have a sneaking suspicion raising Jesus was a lot like raising my son.

Now don’t get me wrong – I’m definitely NOT sinless, and my son is more imp than divine. But I have this can’t-shake impression of Jesus as a preschooler:

Obedient, loving, and absolutely charming, finished off with an iron will. 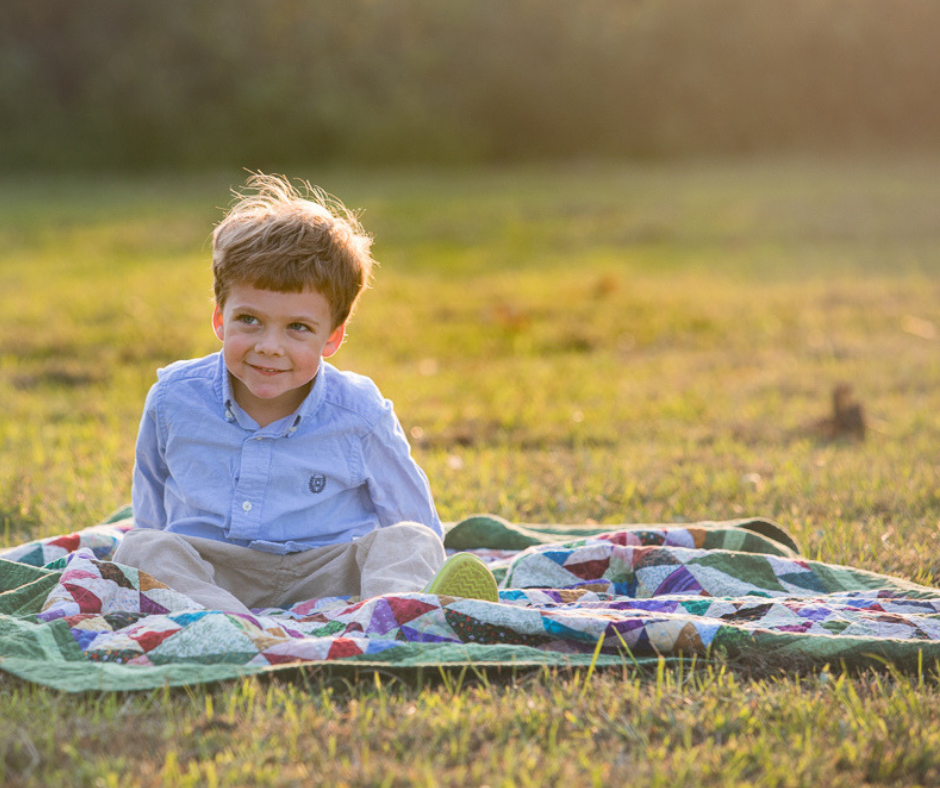 We don’t know much about Jesus as a child. We see him in the manger in the Nativity and in Mary’s arms on the flight to Egypt, then not again until he’s 12 years old. And what has he done at this critical juncture?

He let Mary and Joseph head back to Nazareth without him while he lived in the temple for five days.

“[T]hey found him in the temple, sitting among the teachers, listening to them and asking them questions. And all who heard him were amazed at his understanding and his answers. When his parents saw him they were astonished; and his mother said to him, “Child, why have you treated us like this? Look, your father and I have been searching for you in great anxiety.” He said to them, “Why were you searching for me? Did you not know that I must be in my Father’s house?”

Um, because you’re supposed to be at home with us?!?

When we think of boys who are willful, we tend to cast them in a negative light.

Lots of no’s and my way’s and pity parties and tantrums.  I’m not so sure we should view them that way.

Let’s go back to the temple for a minute and take a closer look at that exchange. It’s safe to assume that at 12, Jesus knew something of his divine nature. He certainly understood the order of his Father’s will. That understanding drove him to stay where God designed it, in his Father’s house, the temple. Nothing – not even traveling home in the safety of his parents – was going to keep him from that plan.

Notice the behavior, though, of the growing Christ child. He wasn’t being rude or disobedient to Joseph and Mary; he didn’t argue with them about going back. Jesus simply pointed out he was adhering to the will of the Father. He had made it his own, and that was that.

What if our strong-willed boys were given the grace to act in a similar manner, along with the knowledge to discern the Father’s will? Can you imagine what massive change would overtake our broken culture?

Fine young men rooted in Church teaching, dedicated to pursuing the will of God.

This is why I think having strong-willed boys is a blessing. And yes, I will admit – it is a struggle to parent my son. But he needs my direction and the loving intercession of patron saints who shared those selfsame qualities.

Here’s a saint posse perfect for our strong-willed boys.

St. Jerome, because a temper will move mountains if it’s pointed the right way

Born in the 4th century in the area near present-day Croatia, Jerome was a hardworking, intelligent young man. At 12 he traveled to Rome to learn grammar, philosophy, and rhetoric; as he grew to adulthood, he began to live a rather licentious life.

Jerome knew his behavior was immoral, but it took the influence of a good friend to convert his heart. From there, Jerome spent time as a monk in a hermitage, eventually entering the priesthood later in life.

What makes Jerome a good saint for strong-willed boys? Jerome had a temper: a fiery tongue and a sarcastic pen. He had a number of run-ins with heretics and the faithful. In fact, he and St. Augustine shared “words” that for a time deeply strained their personal and professional relationship.

But where Jerome could be hot under the collar, he used that passion to fight for the church. He took on a number of heretical movements and helped defeat them with his words. He also translated the Bible into Latin resulting in the Vulgate, the first known Scripture made accessible to the common man.

What Saint Jerome can do for our boys

If you’ve got a boy with a temper, ask for the intercession of St. Jerome. His influence can give our sons the courage to speak boldly and bravely for Christ and his Church, not to mention the ability to make the faith accessible to the masses.

Show me, O Lord, Your mercy, and delight my heart with it. Let me find You whom I so longingly seek. Behold, here is the man whom the robbers seized, manhandled, and left half dead on the road to Jericho. Kind-hearted Samaritan, come to my aid! I am the sheep who wandered into the wilderness. Seek after me and bring me home again to Your fold.  Do with me according to Your Will, that I may abide with You all the days of my life, and praise You with all those who are with You in heaven for all eternity. Amen.

Resources for Introducing St. Jerome to our Sons

St. Jerome and the Lion

When Don Bosco was a boy, the Virgin Mary appeared to him in the garden. She looked at the boys playing roughly nearby, turned to Bosco, and told him to “conquer these your friends”. She also told him, “Be strong, humble and robust. When the time comes, you will understand everything.”

Several days later, John saw a band of circus performers entertaining in the streets. He joined them and studied their tricks as a means to draw in his more raucous buddies. He realized it would help influence his peers if he could engage them with something fun.

As for traditional education, Bosco couldn’t go to school because his family was poor. Not willing to take no for an answer he found a priest willing to educate him, then went on to become a priest himself. Bosco dedicated his life to serving young boys in trouble, especially those in the prisons and on the street. Bosco even took on bloodthirsty revolutionaries and the Italian government to save those souls for Christ.

What St. John Bosco Can Do For Our Boys

Strong-willed boys are often rather charming, and they have a tendency to use that to their advantage. St. John Bosco proves the graces that come from using charisma and personality in a positive way rather than manipulation. They are a gift from God designed to draw others toward him.

If we ask Don Bosco go intercede for our boys, we are doing double duty. Firstly, Don Bosco’s influence will help them learn to channel that charm and charisma for the conversion of the masses. Secondly, it’ll help keep our boys out of trouble and their hearts fixed on the Lord.

Most Holy Virgin Mary, Help of Christians, how sweet it is to come to your feet imploring your perpetual help. If earthly mothers cease not to remember their children, how can you, the most loving of all mothers forget me? Grant then to me, I implore you, your perpetual help in all my necessities, in every sorrow, and especially in all my temptations. I ask for your unceasing help for all who are now suffering. Help the weak, cure the sick, convert sinners. Grant through your intercessions many vocations to the religious life. Obtain for us, O Mary, Help of Christians, that having invoked you on earth we may love and eternally thank you in heaven.

Resources for Introducing St. John Bosco to Our Sons 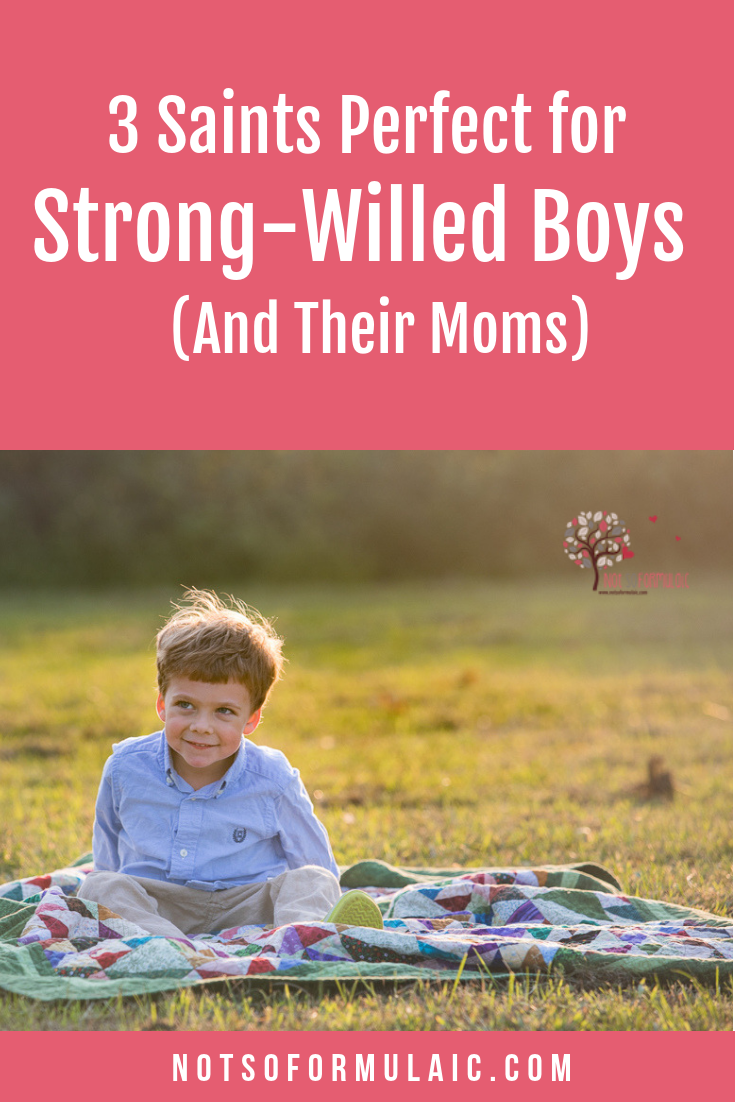 St. Augustine, because God’s grace is outside time

Augustine was the quintessential bad boy. While originally he bore no guilt over the wanton nature of his lifestyle, there came a point when he felt the Lord drawing him closer – no doubt thanks to the prayers of his dedicated and holy mom.

Still, Augustine wasn’t ready to give up his wine and his women. You’ve probably heard one of his famous quotes: “Lord, make me holy, but not yet.” Augustine’s heart was restless and the lifestyle he led couldn’t fill it – only the grace of God could.

What St. Augustine Can Do For Our Boys

Following Augustine’s conversion, he became one of the foremost doctors of the Church. His example shows God’s mercy is endless, that it’s never too late to come home.

Resources for Introducing St. Augustine to Our Sons

I know because I have one in my lap right now, making it clear that this post is not on his agenda for the day. But when we recognize the beauty in that iron constitution and see God’s hand in our sons’ temperaments, raising them becomes an opportunity for holiness, for bringing us (and them) closer to Jesus.

Thank God for the saints who intercede for strong-willed boys.

Got a strong-willed boy?

Sister, so do I – and I’ve got you covered. Let me help you discern a saint posse for your strong-willed son.