How do you handle your kids’ the sensory preferences and overload of your children when you’re barely coping yourself? Take a cue from St. Zelie, a sensory mom’s gift from God. (A guest post from the talented and funny Katherine Reay of I Surrender)

Like the St. Zelie bracelet featured in the post images? You can find it here, at Kindred Forest (this is an affiliate link, please see my disclosure policy for details).

I studied Early Childhood Development in College. The idea was suggested to me at a standstill. I had just finished a year of Youth Ministry via a 2nd-year program offered by the Bible School I attended.

I wasn’t sure what I wanted to do with my life. All I was certain of, is that I just wanted to be a mom.

One of the Bible School directors suggested to me that she knew someone who went to school to learn about children, and that had helped her in being a mother. That settled it! I would go to school to “prepare” to be a mom.

Studying Early Childhood Development was one of the best decisions I ever made! However…

Nothing. NOTHING. Can prepare you for being a mother.

As much knowledge as I had gained, as much time as I had spent with so many wee ones (who held pieces of my heart), as many diapers as I had changed (and that was a LOT), that first baby was still such a life-altering experience that I didn’t feel prepared for. And if I had taken the 2nd year of the course (I ended up accepting a full-time job) which had some focuses on behavioral “issues” and developmental delays–you know, “special” kids–, I probably still would not have felt prepared for the challenges that I’m facing now with our 2nd born, my 3 year old. 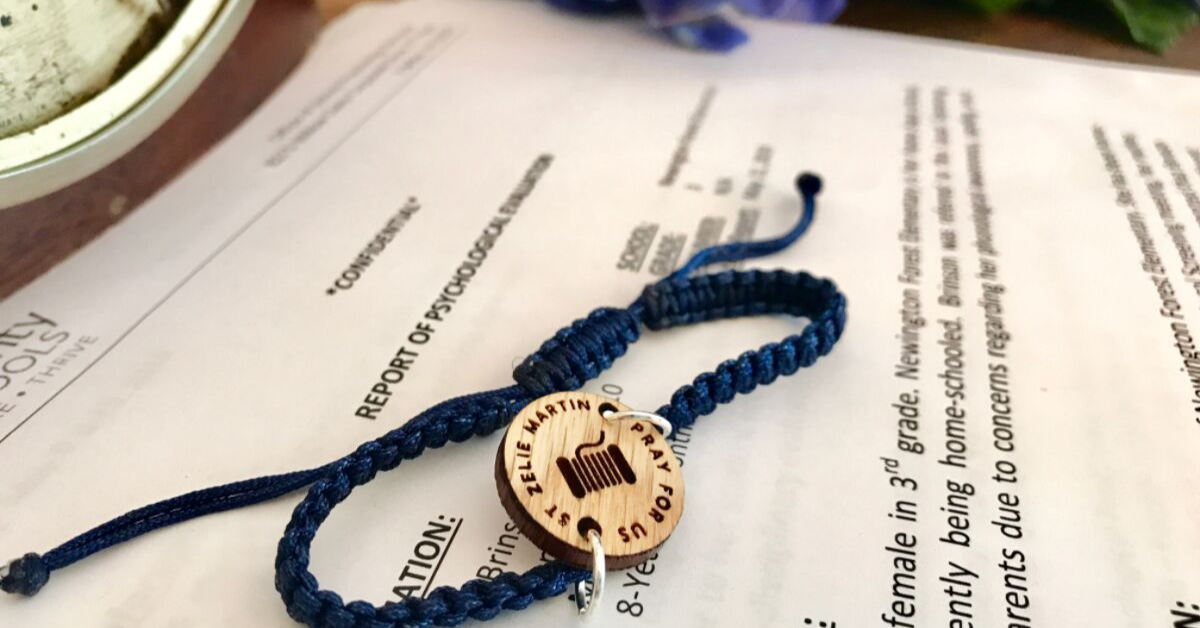 She was a really good baby! I had never noticed any “red flags”, so to speak, with her. And then, halfway through 2, some “challenges” began to surface. Some tempers and meltdowns, to say the least when things didn’t go her way. We had never experienced this with her older sister.

At first, I just chalked it up to the “Terrible Two’s”.

Eventually, though, it was through discovering my OWN challenges that I discovered my daughter’s.

Even before I became a mother, my knowledge in Early Childhood Development made me realize that I had some sensory “issues”. After becoming a mother, and even more so in the last year, I have become much more aware of my sensory processing challenges.

I have light sensitivities.

I wear my sunglasses while driving even when the sun’s not out.

I am sensitive to textures both in touch and taste and I hate getting my hands dirty.

My nose is in constant overdrive–even when I’m not pregnant–and certain smells (like onions frying or cigarette smoke) make me nauseous.

Too much noise sets off my anxiety; I can’t concentrate or focus.

I am easily overwhelmed.

I am highly sensitive.

I knew my daughter was highly sensitive.

However, I didn’t yet realize that she, too, may have some sensory processing challenges. It wasn’t until I was on a trip visiting friends that someone suggested it to me. One of my friends’ 2-year-olds let out a loud shriek and my daughter, unsurprisingly, began crying. This wasn’t a first time.

Realizing that my daughter probably has sensory processing challenges, turned on a big, bright lightbulb for me…

But it still didn’t give me what I needed to cope with the meltdowns.

Learning to Cope With  – and Manage – Sensory Concerns

Once she hit the “point of no return” she was impossible to deal with. She would be perfectly fine, giggling away, and if she felt triggered and I couldn’t calm her in time, or if someone else dealt with her in the wrong way, it would be too late. I remember silently praying during one of her meltdowns and saying “Lord, I can’t do this!”

It was so challenging to deal with her screaming when the screaming was a trigger for me.

How am I supposed to try to continue being calm with her, when her screaming is making me anxious? What do I do?!

One night during bedtime she hit the “point of no return”. Her poor sister couldn’t go to sleep because she wouldn’t stop screaming. It got so bad that eventually I just carried her–kicking and screaming–to the bathroom and sat on the floor in front of the door–in silence–waiting for her to peter out, while she screamed and threw things and swatted at me. Eventually, she calmed down. I carried her back to the bedroom, lay her in her bed, sat on the floor beside her, and finally nursed her brother to sleep. She was so worn out from all the screaming that she was asleep almost instantly.

I left the room, lay my son in his crib, collapsed on the couch into my husband, and began sobbing.

“Why is she so angry?” I asked through my sobs. “I don’t understand!”

I had always tried my best, through my Early Childhood knowledge, to deal with situations calmly, using proper language, etc.

She still had meltdowns.

She was such a happy, bubbly little girl…but she was so angry! 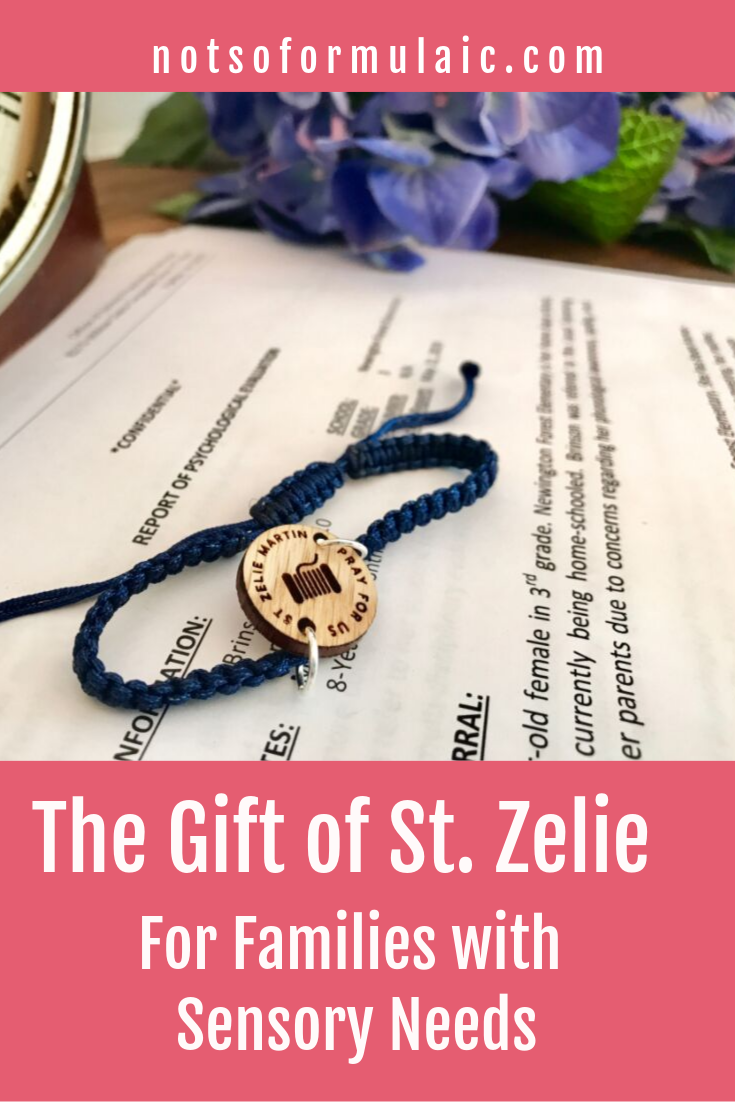 St. Zelie – and Therese – to the rescue

I don’t remember if it was that night or the following morning, but the Holy Spirit spoke to my heart. I remembered, “Wasn’t St. Thérèse a handful as a child?” I Googled something to that effect and found my hope!

Thérèse was, she wrote, ‘incredibly stubborn. When she has said ‘no’, nothing will make her change her mind. One could put her in the cellar for the whole day.'” St. Zélie wrote of her daughter, Thérèse.

“Little Thérèse was blond, blue-eyed, affectionate, stubborn, and alarmingly precocious. She could throw a giant-sized tantrum. Her bubbling laughter could make a gargoyle smile.

THIS was my Olivia, to a T! ALL of these things! Her giggle is one of my favorite sounds on this planet! Her laughter is so contagious! But Lord, give me grace when she doesn’t get her way.

In a note, Zélie advised her daughter Pauline:

She (Thérèse) flies into frightful tantrums; when things don’t go just right and according to her way of thinking, she rolls on the floor in desperation like one without any hope. There are times when it gets too much for her and she literally chokes.

Surely if a saint dealt with such “troublesome” children, who became saints themselves, there is hope indeed for me and my babes!

Reading St. Zélie’s letters gave me hope. I’m not sure if my daughter getting a little older is helping her to cope better, or if our nightly prayers asking for the intercession of St. Thérèse & St. Zélie (among many others) is kicking in, but I find that she is having fewer meltdowns and when she does, I’m not feeling as anxious.

St. Zélie and St. Thérèse, continue to pray for us! 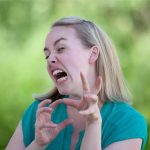 Katherine is a Catholic blogger, stay at home mom, and soon to be homeschooler. She lives in Alberta, Canada, with her husband Steven, and children Sophia, Olivia, Dominic…and tbd. Connect with Katherine on her blog, Facebook page, and Instagram.