When it comes to homeschool socialization, teachers get an awful lot wrong. I should know – I used to be one. Here’s the truth according to a homeschool mom.

It started with an envelope of heartache and solid Fs. I tossed the packet in my diaper bag, then shifted the toddler to my other hip. Across the room, 27 newly-minted first graders posed for the camera.

Number 27 had found her way into a corner, spinning in tight circles beneath a slant of light. I watched, my heart in torment.

I’d been putting off the decision for months.

Are you sure homeschooling’s the right option? She needs the socialization. She’ll learn to cooperate better with her peers when she’s with them all day.

I kept my eyes fixed on that phoenix in the sunbeam, her red highlights caught like rubies in a stream. She was twirling in the ashes of my profession, and I knew it.

Or at least the ashes of what education’s supposed to be. 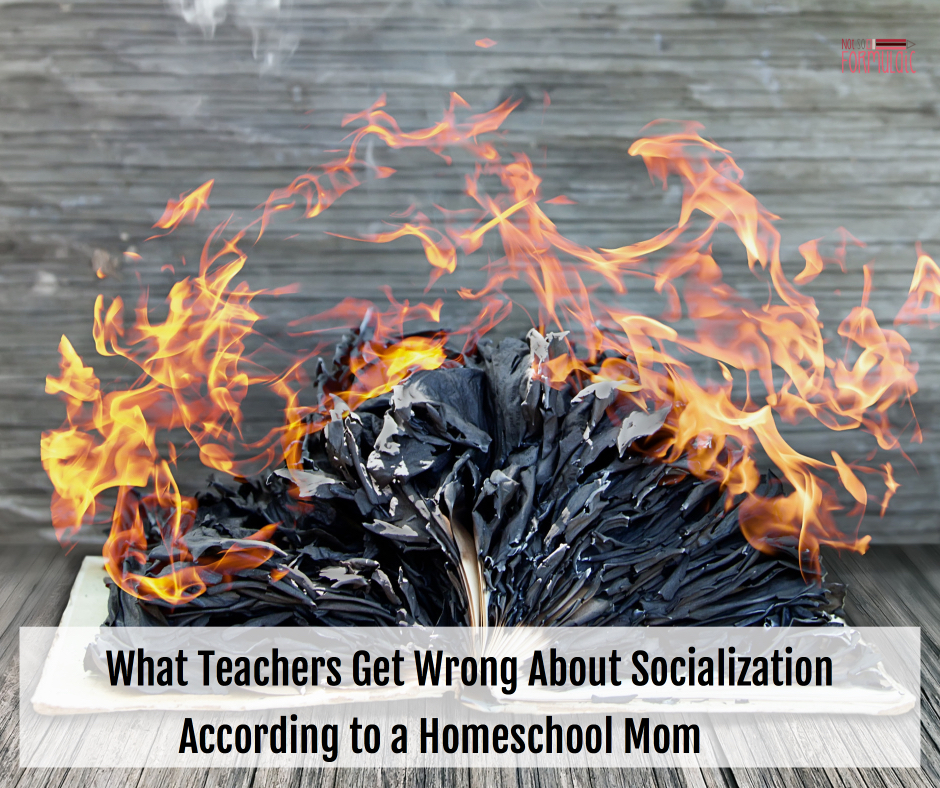 Seventeen years ago I was a classroom teacher. I had ideas about homeschooling.

It was a fringe movement isolating children. Generations of kids would be unable to collaborate, cooperate, or relate to age level peers.

Nevermind I had family who were homeschoolers, nor that I’d seen positive results firsthand. I still believed the school environment was integral to the wellbeing and social development of children. Home education couldn’t provide that sort of interaction, no matter how hard parents tried.

And, probably, I took homeschooling personally. I devoted countless hours of professional and personal time to the unfolding of potential and skills. I loved what I did, and my students were successful.

Why would any parent not want that – not want me – for their own kid?

When motherhood came, I clung to the notion.

Socialization would be the balm our daughter needed.

But it became clear we had a problem somewhere between the tantrums and the principal’s office. She was a troubled kid, the kind school socialization flings into chaotic waters.

Try preventing a mass drowning when you can barely swim upstream yourself.

As a homeschooling mom and former teacher, I can tell you one thing teachers get wrong.

Homeschooling is no more insular nor isolating than our modern school model. Teachers praise the benefits of working with those you barely tolerate, but they ignore the social climate such environments have bred. All you have to do is look at mainstream media:

Our society mirrors the system that shaped us. To cast homeschooling as inferior because the practice removes children from diversity and collaboration is to disregard our propensity to do the same in everyday life. As The Economist noted in 2008, “Americans are increasingly forming like-minded clusters, “choosing to live, work, and socialize with individuals who hold the same ideals.” This polarization increases with level of education:

“Better-educated people tend to be richer, so they have more choice about where they live. And they are more mobile. One study that covered most of the 1980s and 1990s found that 45% of young Americans with a college degree moved state within five years of graduating, whereas only 19% of those with only a high-school education did.”

Given that in 1999 the percentage of homeschoolers was only 1.7% nationwide (the earliest date for which I can find statistics), it’s not much of a stretch to assume the majority of contemporary adults, both educators and parents – were taught in modern schools.

For the parents of the nearly 1.5 million children currently homeschooled in the United States, that time is now. We have pulled our children out of school and created opportunities for positive social discourse outside an artificial construct far removed from everyday life. We take part in the daily rhythm of society where true cooperation and collaboration form:

We get out in the world; we make friends and conversation with peers and adults from all walks of life. And then, instead of repeating the process for eight hours in an institutional setting, we come home.

We let off steam.

We learn to get along with others in a safe, nonthreatening environment. There’s no sensory assault, no required work in a team. Homeschooled children learn through real world experience, excelling in the very skills educators claim don’t exist.

That day at kindergarten graduation I realized something.

Homeschooling isn’t about isolating children, though it is about sheltering to a degree. Those of us who homeschool are fighting baptism by fire – we’re seeking incremental growth for our children at the right developmental speed. We pull them out of school because the institution doesn’t do that, no matter how talented or hard working the educational team. Children face an immediate push toward sameness and conformity.

Rubies don’t belong in the ashes of education.

Why I Homeschool My Gifted, Sensory Processing Disorder Child, And How

Saying Goodbye to the Big Yellow Bus, and Your Guilt, Too

Extraordinary Love: What I’ve Learned as the Mother of a Twice Exceptional Child

Embracing the Art of Us: 10 Ways Homeschooling Can Heal Your Family

What Teachers Get Wrong About Socialization, According to a Homeschool Mom 897005298

What Teachers Get Wrong About Socialization, According to a Homeschool Mom 900278303