Need a way to keep your toddler occupied during the homeschool day? Look no further than this DIY activity center – an Ikea hack for toddler moms.

Homeschooling with a toddler is a lot like running a marathon.

In the middle of the desert.

I often question my sanity, not to mention my mothering and housekeeping skills.

I’m not an inherently organized person. I like being organized, and clean, ordered spaces make me happy, but I have to work at it. Throw in a tiny school room and a toddler tornado and you’ve got a recipe for the appearance of my homeschool, which for most of the babe’s second year of life looked like a disaster area. 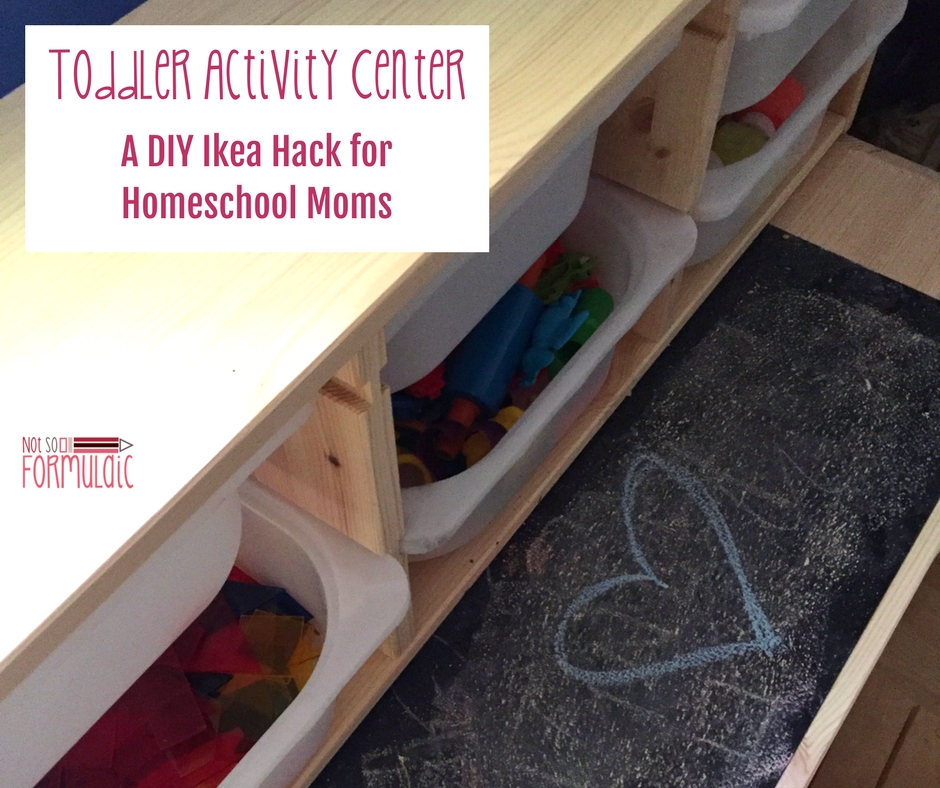 By late July I was getting panicky. School would be starting up again soon, and the little guy was more active and inquisitive than ever. My previous (not really a) strategy of “throw various toys at the babe to keep him occupied while his sisters are working” was becoming less effective, not that it ever really was.  How was I going to make this work?

Fortunately, being a part of the homeschool blogging world has made introduced me to some knowledgeable women. KT Brison from LitMama Homeschool is one of the best. When I came to her with my concerns about the little guy’s role in the upcoming school year, she gave me the best, most applicable advice I could have wanted.

Toddlers just want to be included.

It seems so simple, but it’s amazingly true. Every bit of mischief my little guy causes is a function of his desire to be a part of what’s going on. I knew what I needed to do, but how?  What would be the best way to create an inclusive environment of discovery?

Yes, the Swedish icon of style and quasi DIY spirit. We have two Trofast storage systems in the girls’ rooms. I love their simplicity and workhorse attitude. It occurred to me – why not get a third and hack it?  Make it a discovery station for the little guy?

The ideas rolled in. I needed cubbies. Lots of cubbies. Space for play dough and play dough toys, crayons, paint, and manipulatives. I wanted a light box and a sensory bin. A magnetic chalkboard surface. A big roll of craft paper.

And it needed to be on wheels. 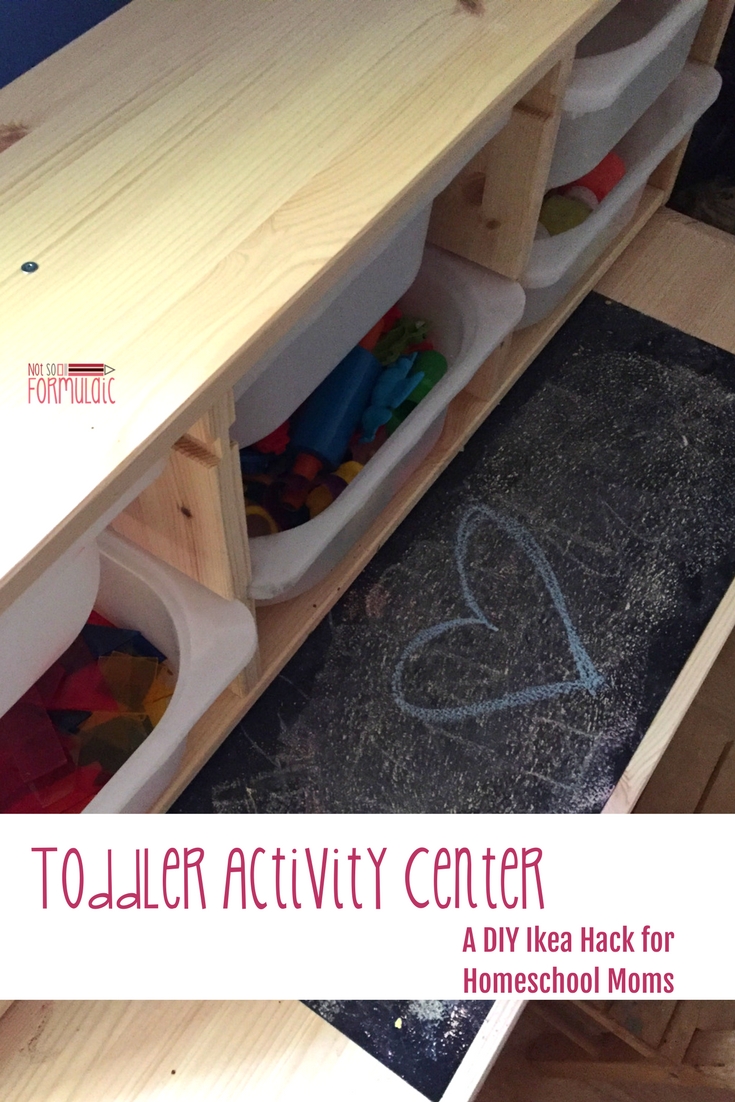 The more I thought about it, the more I realized this was actually possible. I looked up a tutorial for a magnetic chalkboard and found a great one here, then took the kids to Ikea on a (so fast) Trofast mission.  The one I had envisioned in my head didn’t exist (because, of course), so I ended up with these two and decided to stack them together.  I bought three of the 17×12 storage bins  and six of the 8×12 storage bins, one Trofast lid, and three battery operated lights (not available on the Ikea website.  See photo below to get an idea of what you’ll need).  I also picked up a box of chalk and a big roll of paper,   then headed to Home Depot for the following:

All of this sat in my living room for a week because life.  But eventually I put the two storage systems together and set them in the kitchen like so (for safety, the top cabinet is secured to the bottom cabinet): 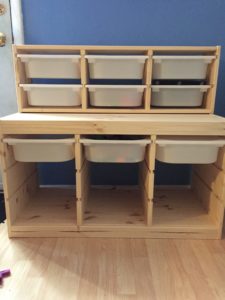 The next day the hubby helped me prime and paint the metal, which we currently have set on top of the larger Trofast and plan to attach with with wood screws.  The wheels will also go on soon; I ended up getting the wrong kind the first time around so I need to go back to Home Depot this week and exchange them.

Here’s the light box – it’s one of the larger Trofast bins with the battery operated lights inside, topped with the storage lid. I have some translucent geometric tiles to place on top (pictured below). 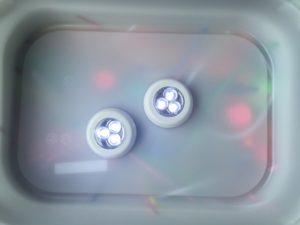 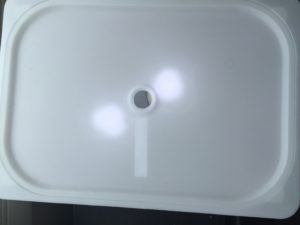 He has two sensory trays 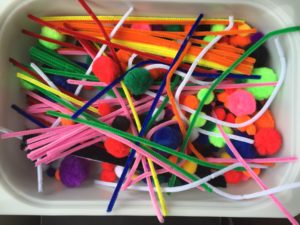 And bins full of fun stuff 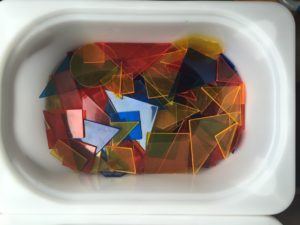 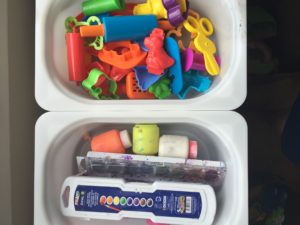 His chalkboard surface is fully functional and magnetic. 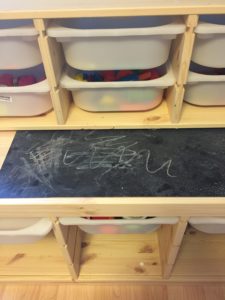 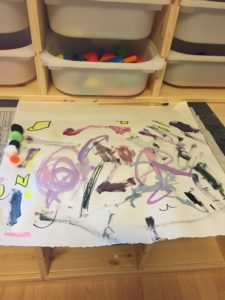 I’m really happy with how it turned out.  All of the kids love it, and it’s given the babe something to do while we work at the dining room table.  We’re getting school done and he’s having a blast discovering, so I’d say that’s a win/win situation.