If you’re watching the school bus wistfully and chastising yourself in the next breath, stop. Wave goodbye to the big yellow bus, and your guilt, too (this post is part of iHN’s Mom Guilt Bingo).

It started with haircuts.

I had set the appointment for 10AM on a Friday, the first appointment of the day.  Logic would dictate that, as homeschoolers, we would have the salon to ourselves. 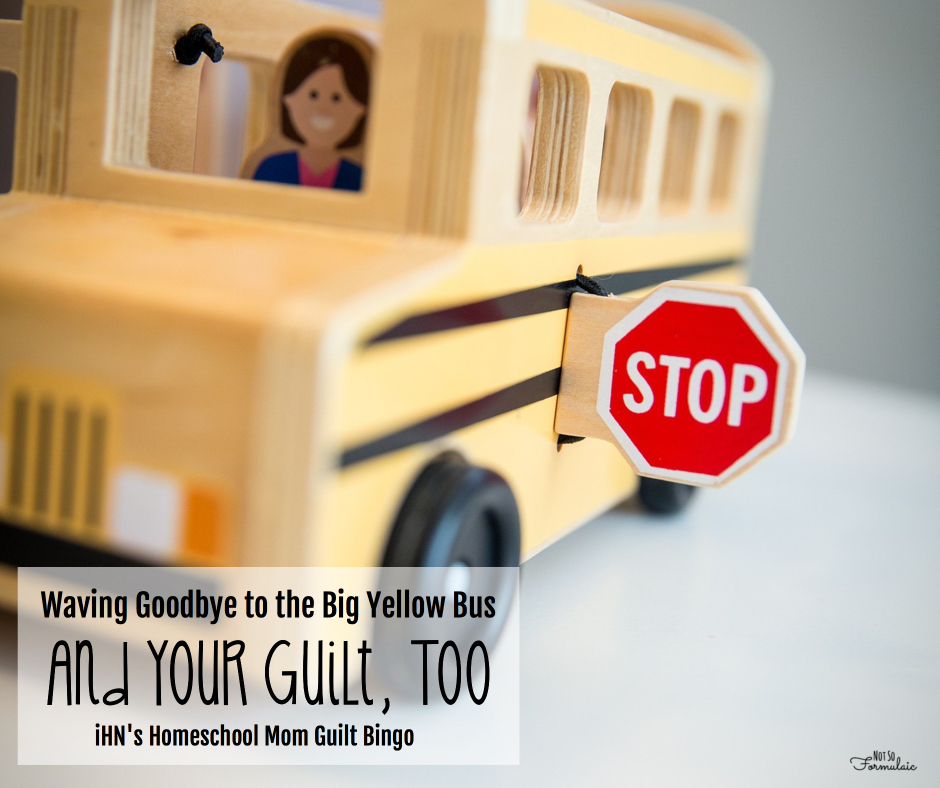 We arrived for our appointment at 10:07, frazzled from battling a nefarious pair of socks. Instead of finding the salon empty as I had anticipated, the door opened to two blonde poppets ensconced in protective capes.

I studied their mom. She was trim, clad in expensive athleisure. Her skin was flawless: her hair in a neat pony tail. She oversaw each boy’s cut with steely precision: “A bit more here.” “Closer in there.” Neither of her boys made a peep.

I caught a glimpse of myself in the mirror. My leggings had a small hole in the derriere (completely covered by my tunic, but still.) Peanut butter decorated the corner of my mouth. Damp hair fell in great, tangled swaths, overdue for a cut of its own.

And my toddler son was pulling every balloon-on-a-stick out of the giant, hooray-you-survived carousel.

I turned to correct him, forgetting I had set my bag next to me on the checkered tile floor. I tripped, knocked the bag’s contents to the four winds, and stifled a crazed shriek. A dozen red balloons bounced around me, aided by my overly enthusiastic mop-headed marauder. His sisters remained oblivious to my plight: one rummaged through a pile of overpriced Beanie Boos while the other fixed her gaze on a television screen.

As I scrambled after my son, his various balloon friends, and the upended contents of my purse, I had some thoughts.

None of them were good.

None of them were alleviated, either, by the completion of the other two boys’ haircuts. They climbed down from their chairs as I stood by the balloon tree, painstakingly replacing each scarlet globe. Both of them wore t-shirts emblazoned with a seahawk – the local elementary school’s mascot.

And not for the first time, I wanted to send my own children with them.

Homeschooling is the most difficult, rewarding job I’ve ever had. While I know the benefits outweigh the drawbacks, that sneaky, grass-is-greener voice snakes its way into my heart with more frequency than I’d like to admit.

But as often as I’ve owned up to this feeling, I keep coming back to a text from my husband, sent in response to a dramatic missive about my desire to throw the kids on the bus. I had the dreaded mom guilt monster breathing down my neck, and I told him so in no uncertain terms.

“Okay,” he replied. “This too shall pass. Stick to the mission and we will get through.”

He just said okay. Because truthfully, it is.

It’s okay to feel overwhelmed. It’s okay not to love homeschooling. It’s even okay to reconsider if it’s the right path for your family. But the key to all of this is the second part of his response:

Stick to the mission and we will get through.

We are moms first, and homeschooling moms second. Our mission is to love our and support our children as best we can – whatever that means at the moment. For the vast majority of us, that means taking a deep breath, a step back, and a second (or two) to ourselves emerging secure in our confident vocation as our children’s primary educators. And for some of us, that means making peace with the knowledge it might be time to move on.

But here is what it does not mean:

We are human. We have our own needs. And just as our kids need us, we need us, too. 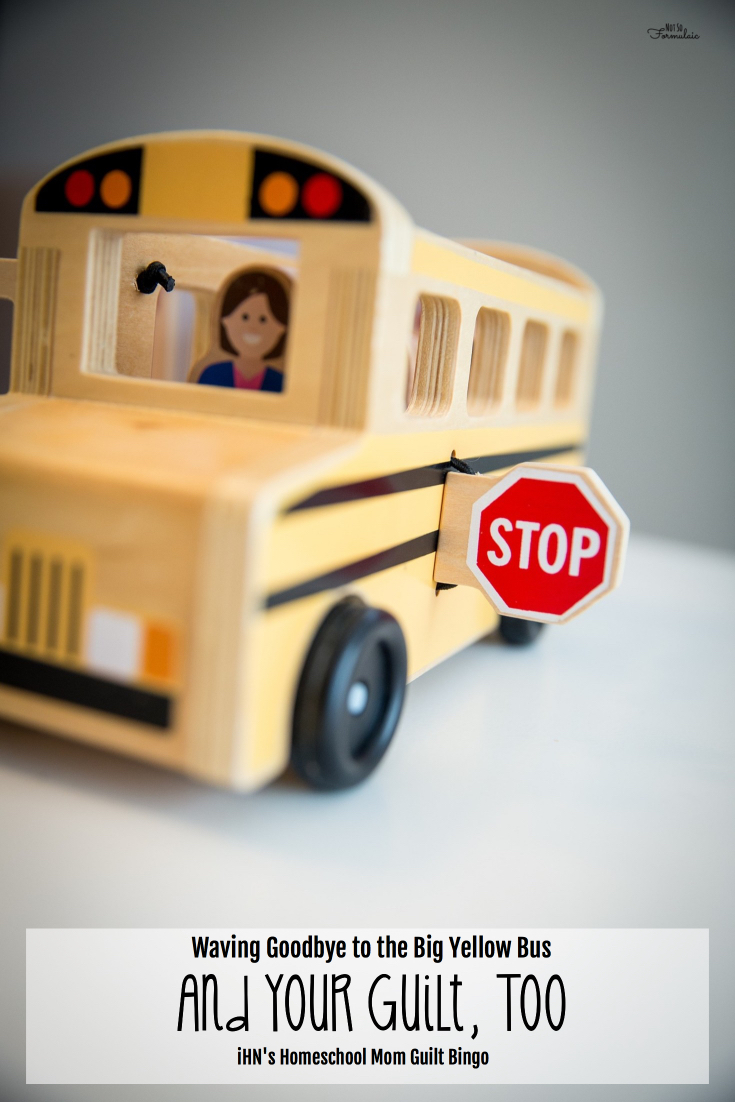 If you’re watching the bus stop wistfully and chastising yourself in the next breath, stop.

Renew with a day trip, a weekend getaway, an outdoor excursion (alone or with the kids).

Restore your relationships with read-alouds, long walks, sports, or crafts.

Reevaluate your curriculum, your schedule, your approach.

Resist comparing yourself to the next door neighbors.

Recharge your batteries, and go easy on yourself.

Stick to the mission, and you will get through.

This post is part of the iHomeschool Network’s Mom Guilt Bingo. 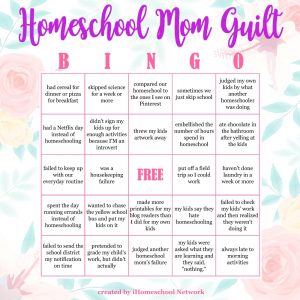