Despite years as a high school English teacher, I homeschool my gifted, sensory processing disorder child.  And you know what?  You can, too.  Here’s why – and how.

As usual, my mom picked up on it first.

“You’re going to have to homeschool that child.”

G was four.  She was in preschool and doing well – for the most part. But there were hints, like meltdowns of epic proportions. Sleep issues from the day she was born. Food aversions resulting in five safe foods. Transition troubles that wreaked havoc in the classroom.

Her preschool teachers recommended a call to early intervention, but they dismissed our case after the initial intake screening:

No evidence of developmental delay. Child’s difficulties are most likely behavioral.

Translation:  nothing’s wrong with that kid. It’s the parenting that’s the problem. 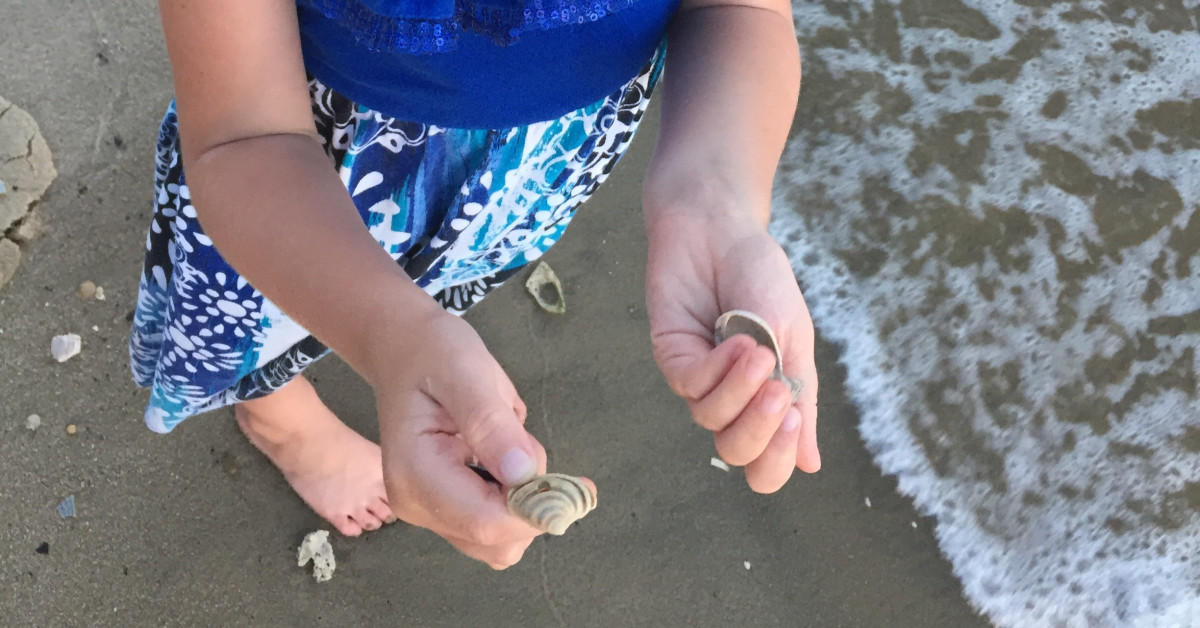 Motherhood’s a two-for-one deal. You get this gorgeous baby, plus 30% more maternal guilt (FREE!). Raising a child with sensory issues or special needs doubles that special offer.

Generally, it starts with an assumption: your child’s very public meltdowns are a direct result of your parenting.

Sure, kids have tantrums. But a knock-down, drag-out, DEFCON 5 meltdown at a restaurant? You know, the one where she knocked the dishes off the table, growled like a hell-hound, and flailed around on the floor for ten minutes until we could drag her kicking and screaming to the car, only for her to buck and wail for another fifteen while we tried to buckle the carseat?

No kid with a decent set of parents would behave like that, right? We must spoil her. Let her run wild. Give in to her every whim.

At home, G’s behavior was normal. It was a controlled environment with routines and boundaries naturally set in place. We knew our daughter, and were able to head off most issues intuitively.

It was outside the home – at parties, in the classroom, on the playground – where we had the most trouble.

And the most judgment.

The road to a sensory diagnosis

When G moved on to kindergarten, the judgment didn’t intensify. It mutated.

When G was nine months, we noticed she had a phenomenal memory and an insatiable appetite for books.  By the time she was a year old, we spent hours – literally  – reading.  G absorbed it all, and was devouring books like The Hobbit and Frank L Baum’s The Wizard of Oz the summer before kindergarten. Her math skills and pattern recognition were stellar; her processing speed and comprehension off the charts. But there she was, in a kindergarten classroom with 24 other five-year-olds, learning basic math and reading.

She was intellectually advanced, socially delayed (a common trait among gifted children), and sensationally overwhelmed.

This did not go over well.

“She’s under the table, screaming. Says she won’t complete the assignment because the words on the page are wrong.” (They were – the teacher’s subject and verb didn’t agree)

“She punched a hole through her math packet with a pencil, then threw them both across the room.” (G retrieved a green crayon from the art supplies to color her frogs green. The teacher took it from her and insisted she use pencil)

“She ran from the classroom again today, and got all the way to the front of the school building before we could catch her.” (And catch her they did, dragging her back down the hallway by the arm as she begged for a break on the swing set)

“She hit another child on the playground.” (The child had hit “her” tree with a stick, and refused to stop.)

G’s behavior was unlike anything they had seen. From her first meltdown the first week of school, they labeled her autistic.

G is a twice-exceptional. 2E children are frequently misdiagnosed, and so it went with G. We spent December to April in a slack-jawed, gun-shy haze of evaluation and assessment.

What did we end up with?

The school staff was so convinced of G’s Autism, the developmental pediatrician we saw for a second opinion ruled their findings invalid.

“I don’t know what’s going on with your child, but something is. Take her to an occupational therapist.”

So we did, and learned the truth: 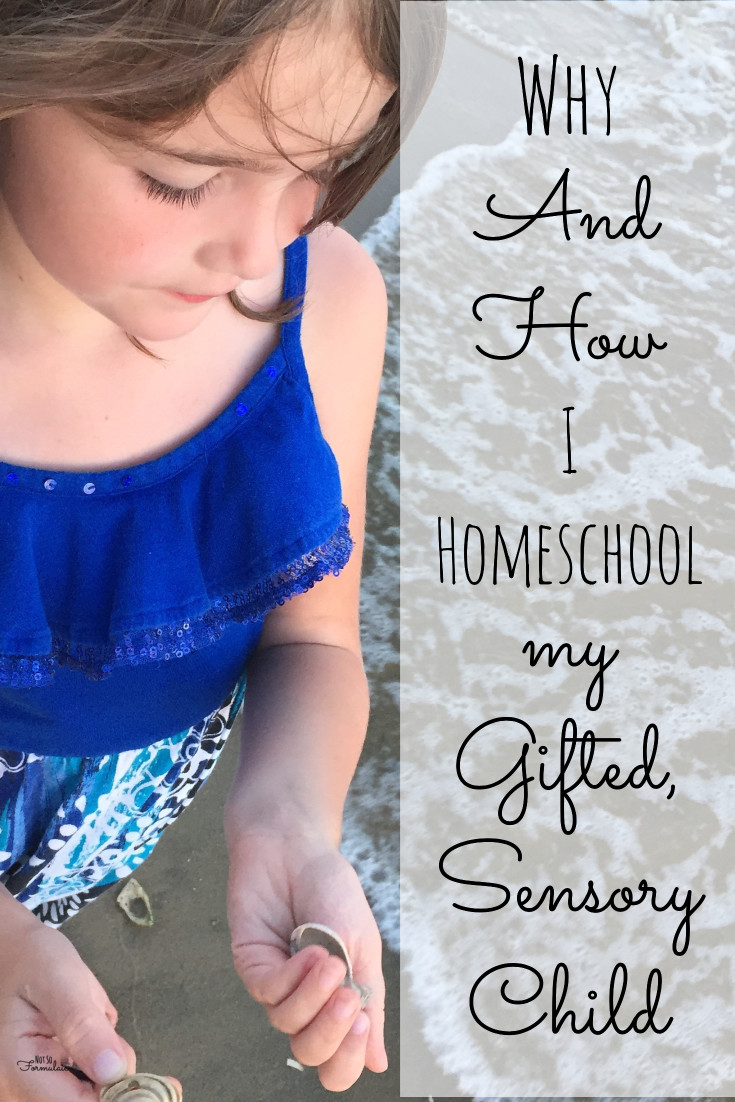 Remember how I said the IEP was useless? After months of meetings and discussions, we got

Nary an advanced curricula nor sensory diet in sight.

It wasn’t just the IEP that gave us pause. She’d still be in a huge classroom with tons of kids. She’d still be getting up early, filtering a ridiculous amount of sensory stimuli, and getting home late in the afternoon. We’d still be dealing with all kinds of fall out in the classroom.

I didn’t want another year of that. Not for her, not for us, and not for the school staff who, despite their best intentions, hadn’t a clue as to who my daughter really was.

So we brought her home.  And it’s been the best decision we’ve ever made.

Why I homeschool my gifted, sensory processing child, and how

Now that we’re four and a half years into this homeschooling gig, I rue the time I spent trying to force my square peg into a round hole.  Homeschooling has been a gift to our twice-exceptional kiddo, and here’s why:

If G’s having a bad day, we can skip it.  We can go outside, play a learning game, or cuddle up on the couch and read a book.  She doesn’t have to be on if her body-brain balance won’t let her.  The result? She’s happy, we’re happy, and we’ve all learned how to prevent SPD struggles from impacting her academic success.

G can learn what she wants, when she wants. We do follow a curriculum (see below), but I tailor it to her interests, skills, and needs.  She doesn’t have to wait for anyone else to catch up, nor does she have to rush through a challenging topic.  She can go at her own pace, and we both love it.

I’m a high school teacher by trade. One of my biggest fears about homeschooling was the possibility my children would be unable to handle a classroom environment later on down the line. While I realize now this fear was unfounded, it did give rise to something good: I found a hybrid homeschool curriculum. We started with a half-day of classes once a week, and now she and her sister are in “school” from 9 to 3:15 on Thursdays. It hasn’t been perfect: we’ve had to work with the staff to accommodate her needs. But the girls get a classroom experience and time with friends while I hang with the toddler and work on things at home.

Mama, if you’re considering homeschooling a twice-exceptional or special needs child, take heart.  It can be done.  In fact, it can be the best decision you’ll ever make.

You know your child better than anyone.

You know her heart, her soul, her interests, and her desires.  Moms always pick up on it first.

Listen to your gut, and go for it.

This post is part of iHN’s Beyond Academics link up. 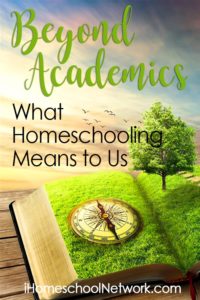 Why I Homeschool my Gifted, Sensory Processing Child, and How 927214000