Angry children don’t rage for anger’s sake. Rather, their behavior is a symptom of a deeper issue. Here’s a close look at the anatomy of an angry gifted child, plus suggestions for helping her cope.

I have angry kids.

They are also brilliant, sensitive, loving, and empathetic, but those things don’t garner the attention of authority figures in a school or enrichment class.

Yep. Nothing makes you question your parenting ability (read: sanity) more than a child who’s the perpetrator in an incident report.

Or a child who makes you flinch. Or makes your fingers hover over the dial pad of your smartphone.

But I’ve learned something over my years of parenting – the rage is never anger for anger’s sake. Rather, it’s a first line defense for a much deeper emotion.

Punishment doesn’t do anything. It’s understanding and forgiveness that does. 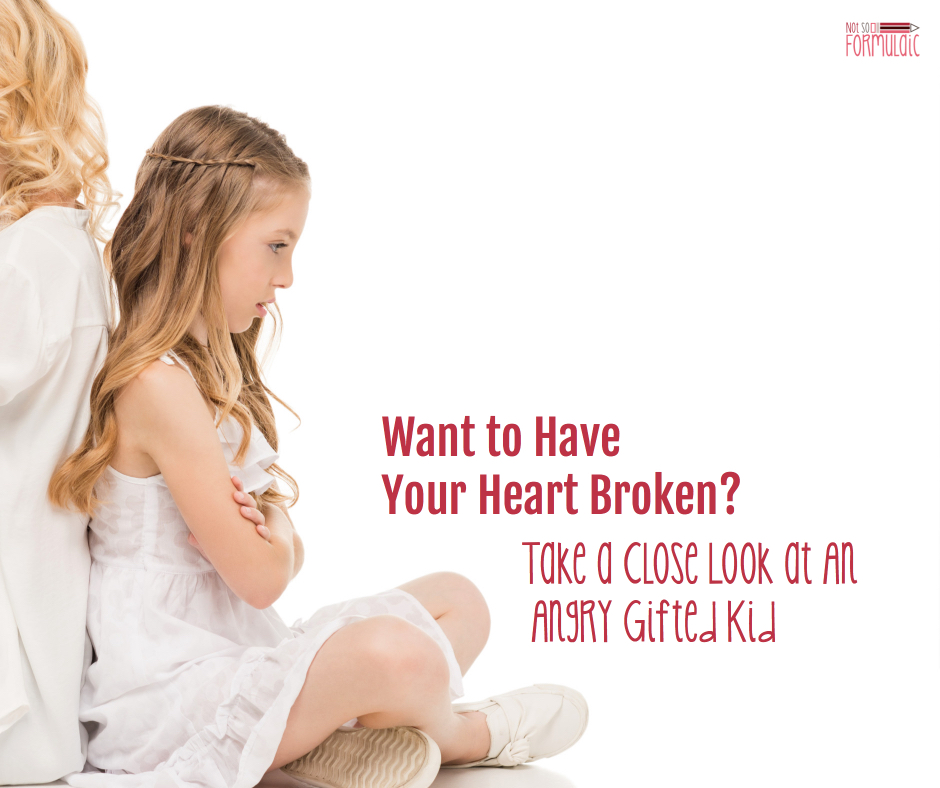 Anatomy of an Angry Gifted Child

The word “gifted” is a misnomer. It’s not a gift so much as it is a difference, a biological variation from the norm. Brain scans of gifted individuals have revealed startling information: neural pathways (or “hubs” as scientists refer to them) tend to be denser in individuals with higher IQ levels. The denser the neural hub, the more efficient the processing of information: such scans are physical evidence of a gifted person’s increased processing speed.

But the brain is a complex organ, and even one small deviation can have a cascading effect. I often try to explain it in terms of planting a vegetable garden: if I’ve only got so much acreage, I’m going to watch my spacing, right?

What happens, though, if I’ve got a whole bunch of carrots, and I’ve put them among broccoli seedlings? When my plants start growing, one of those two is going to crowd the other. I might end up with a beautiful crop of carrots amidst struggling shoots of broccoli.

Now in this particular garden of mine, I know the broccoli will grow.

But it will be slower, more deliberate than its bold orange counterpart. This is how I look at my gifted children’s brain development.

They’ve got a whole heck of a lot of carrots growing like gangbusters. The broccoli? It’s in there, but there are signs it’s not doing as much – yet.

I realize it’s an unscientific analogy, but I’m a writer, so really, what do you expect? The point I’m trying to make here is that a gifted child’s brain grows differently. This is going to have lasting developmental effects.

It starts with Asynchronous Development, and yes, this really is a thing.

While a gifted child’s brain erupts in leaps and bounds in some areas, other areas follow an average or below average progression. You might have an 11 year old ready for high school level academics, but socially and emotionally, she’s roughly two to three years below grade.

Then we take into consideration the likelihood of sensitivities.

Gifted children think, feel, and react more deeply to every sense and situation: sounds are louder, smells are stronger, and emotional reactions can be off the charts.

Together, asynchronous development and overexcitabilities have a major impact on emotional regulation. It is difficult for a child to navigate big feelings under the best of circumstances. Imagine trying to do so while under direct sensory and emotional assault.

Want to Have Your Heart Broken? Take a Close Look at an Angry Gifted Kid

Angry kids don’t want to be angry. They don’t want to lash out, hurt feelings, or be rude. In my children’s experience, it’s a symptom of a larger problem. They aren’t hateful, spiteful, or the least bit vindictive. They’re actually caught in the throes of an emotional trigger and unable to manage the feelings they’re experiencing.

Anxiety and anger are strange bedfellows because one would assume they exist in opposition. I know I did, which meant getting to the bottom of my daughter’s struggles took much longer. We’d had a host of broken toys and all-out screaming matches before I finally got it.

The connection between anger and anxiety lies in the fight or flight response. Most people tend to freeze in the face of great anxiety. In gifted kids, the emotion is frequently stifled until the child finally erupts.

The desire for perfection is killer. Case in point: two weeks ago, a dance teacher demanded my eldest leave the classroom. Turns out the precipitating incident was actually related to a missed audition. My daughter was berating herself inwardly; the dance teacher simply asked her to get up off the floor.

We’ve spent a lot of time talking about self-advocacy, but my poor kiddo was immersed in a really bad case of self-deprecation. How was she supposed to tell an adult her most inward, private failings? She lashed out rather than ask for a moment to collect herself, and just like that she was out the door.

Gifted kids know they are different. They know they stand out, and they know people make assumptions. Can you imagine being 10 years old and telling a new friend what you learned about the Hadron Collider?

I didn’t think so. That loneliness takes time to sort out.

Because children are unique and unrepeatable, there are more triggers than those listed above.

You may find your child struggles with one or more of the following: 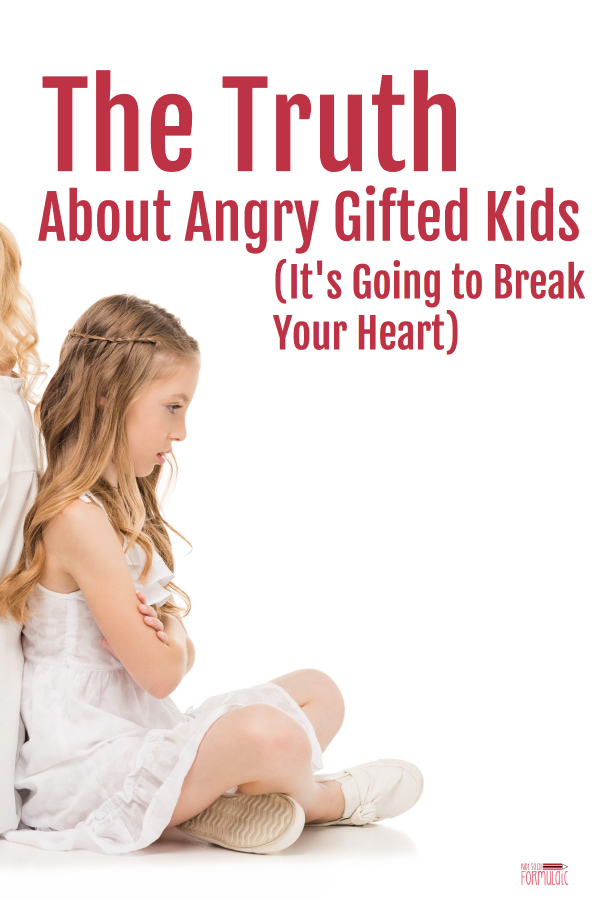 A child’s angry outburst is a cry for help. As parents, we’re responsible for passing on the coping skills that will help our children thrive:

I have angry children. I also have children who are loving, empathetic, and brave.

As their mother, it’s my job to respect those big emotions. An angry child’s outburst is a symptom, not an issue in itself.