Gifted children do exist, despite the arguments of professors and consultants who state otherwise. To state giftedness is nonexistent is to put gifted children at risk, academically, socially, and emotionally.

“You don’t sound like it.” She was crying. I wondered how far I should pry.

Her form shifted under the covers. The air crackled with her thinking.

Sniff. “I don’t want to talk about it. Please leave me here in bed.” 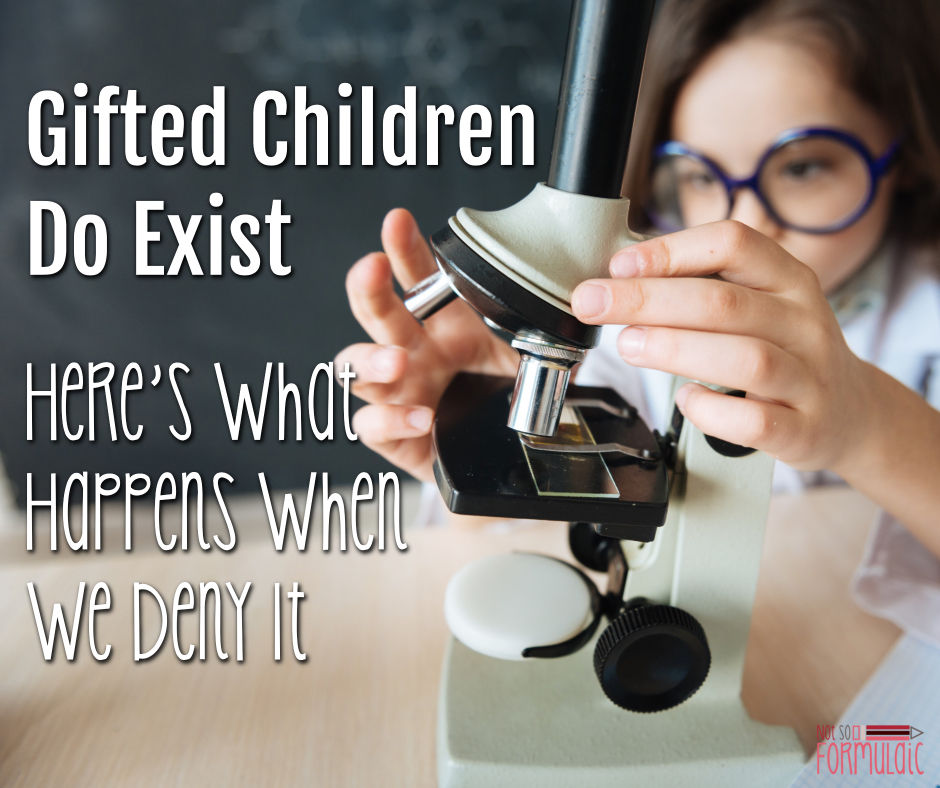 Last spring I encountered a curious movement. It started with an excerpt from this book, authored by Stanford mathematics and education professor Jo Baoler. Baoler’s position? The idea of giftedness is an artificial construct, a label as damaging as it is untrue. At the time, her argument seemed not only flawed but isolated.

That is until July, when I stumbled across this article in The Guardian, a pitch for the book Great Minds and How to Grow Them. Written by journalist Wendy Berliner and her colleague, educational consultant Deborah Eyre, the book argues an idea quite similar to Baoler’s: there is no such thing as a gifted child, and those who posit such a theory endanger the minds, potential, and self-concept of children everywhere.

To the uninitiated, Baoler, Berliner, and Eyre’s position holds merit. It’s essentially a further application of Carol Dweck’s growth mindset, the idea children can achieve academic success through determination, hard work, and a willingness to forge through a challenge.

But there is an underlying implication that doesn’t sit well with me. Baoler, Berliner, and Eyre have a frequent tendency to highlight the twice exceptionality and asynchronous development of intellectual greats like Albert Einstein and Maryam Mirzakhani as evidence giftedness is a lie. These struggles, they argue, are proof it is a learned trait courtesy of neuroplasticity. To these authors, everyone is gifted – we just have to be taught to find it.

Before I come off sounding haughty, I should probably make something clear.

I have taught children of all intellectual levels, backgrounds, and ideologies for the past 18 years. I’ve had children in my classroom who were intellectually disabled; I’ve had children in my classroom who went on to Harvard and Yale. Having worked with all these children, I have no doubt every one is a treasure. Every child has a purpose, a unique and unrepeatable calling to shape and change her world.

Brains are wired differently, in a beautiful and complex way. To say there is no initial difference in the makeup of neural pathways is not only ridiculous, it has proven to be untrue. Brain mapping has helped an international team of scientists see “a clear link between the ‘hubbiness’ of higher-order brain regions — in other words, how densely connected they were to the rest of the network — and an individual’s IQ.” One of the researchers, University of Cambridge and NIH Ph.D. candidate Jakob Seidlitz, further explains: “This makes sense if you think of the hubs as enabling the flow of information around the brain — the stronger the connections, the better the brain is at processing information.”

I don’t deny neuroplasticity exists: the human brain can grow and develop in ways we don’t yet fully comprehend. But to argue the clear presence of such variations in brain structure irrelevant from the outset is irresponsible and dangerous. Children whose brains are wired in this way – wired differently – are left in a terrifying, precipitous lurch.

Let’s take a survey of some gifted artists.

Hemingway? Shot himself at the age of 61.

Sylvia Plath attempted suicide multiple times. She succeeded when she was only 30.

Not scientists, not mathematicians, but brilliant and tortured and ultimately self-destructive, and yes, I believe their giftedness was partially to blame.

I’ve seen it in adults on both sides of my family, and I see it in my children every day. High anxiety. Depression. Perfectionism. Impostor syndrome. Conditions which appear comorbid with giftedness. Up until recently the proof has been anecdotal at best.

In the January/February 2018 issue of Intelligence, Pitzer College researcher Ruth Karpinski and her colleagues published the correlational results of a survey which suggests my theory may be right.

While it does not definitively prove the link between giftedness and mood disorders, the survey results are a much-needed step forward in the study of gifted brains.

To study the relationship between high intelligence and mood disorders, Karpinski’s team sent a survey with questions about psychological and physiological disorders to the members of Mensa, a society for the gifted.

“The survey covered mood disorders (depression, dysthymia, and bipolar), anxiety disorders (generalized, social, and obsessive-compulsive), attention-deficit hyperactivity disorder, and autism. It also covered environmental allergies, asthma, and autoimmune disorders. Respondents were asked to report whether they had ever been formally diagnosed with each disorder, or suspected they suffered from it. With a return rate of nearly 75%, Karpinski and colleagues compared the percentage of the 3,715 respondents who reported each disorder to the national average.”

While there was a statistically significant difference between the national average and the average of respondents for every mood disorder on the survey, two results, in particular, stand out:

Karpinski’s findings give credence to the hyper brain/hyper body theory, first established by Kazimierz Dabrowski in the 1960s. The theory connects high intelligence to psychological and physiological sensitivities (Dabrowski’s Overexcitabilities) that manifest as an intense reaction to environmental or emotional stimuli.

“Psychological OEs include a heightened tendency to ruminate and worry, whereas physiological OEs arise from the body’s response to stress. According to the hyper brain/hyper body theory, these two types of OEs are more common in highly intelligent people and interact with each other in a “vicious cycle” to cause both psychological and physiological dysfunction. For example, a highly intelligent person may overanalyze a disapproving comment made by a boss, imagining negative outcomes that simply wouldn’t occur to someone less intelligent. That may trigger the body’s stress response, which may make the person even more anxious.”

The morning I found my daughter crying in her bedroom, she eventually did tell me what was wrong. The day before, she had mentioned to an acquaintance that bees were her favorite insect.

Affronted, the child questioned her: “Bees are awful! How can you like them?!? They sting!!”

My daughter stumbled for a moment – she was flustered.

But that night she skipped dinner and fell asleep feeling glum and grouchy. She didn’t tell any of us about what happened until the next morning when she woke up crying in bed. Later that day I was folding laundry when her sister pulled me aside.

“Mom, I’ve been thinking. I’m making a list of what I should have told those playground bullies.”

Playground bullies? It’s been super cold – we hadn’t been to the playground in weeks.

“You know the ones that hijacked Tutu? When I was little?”

Five years ago, she had a stuffed dog momentarily kidnapped. The bullies tossed it around the playground structure and taunted her while her sister tried (and succeeded) in getting it back. In the moment, she cried in my arms and was too mortified to speak. But half a decade later she’s still giving thought to it.

Not because she’s sensitive.

Not because she’s intense.

She’s been ruminating about that incident all these years because of the hyper brain/body connection.

We’re letting our children down if we deny giftedness doesn’t exist. 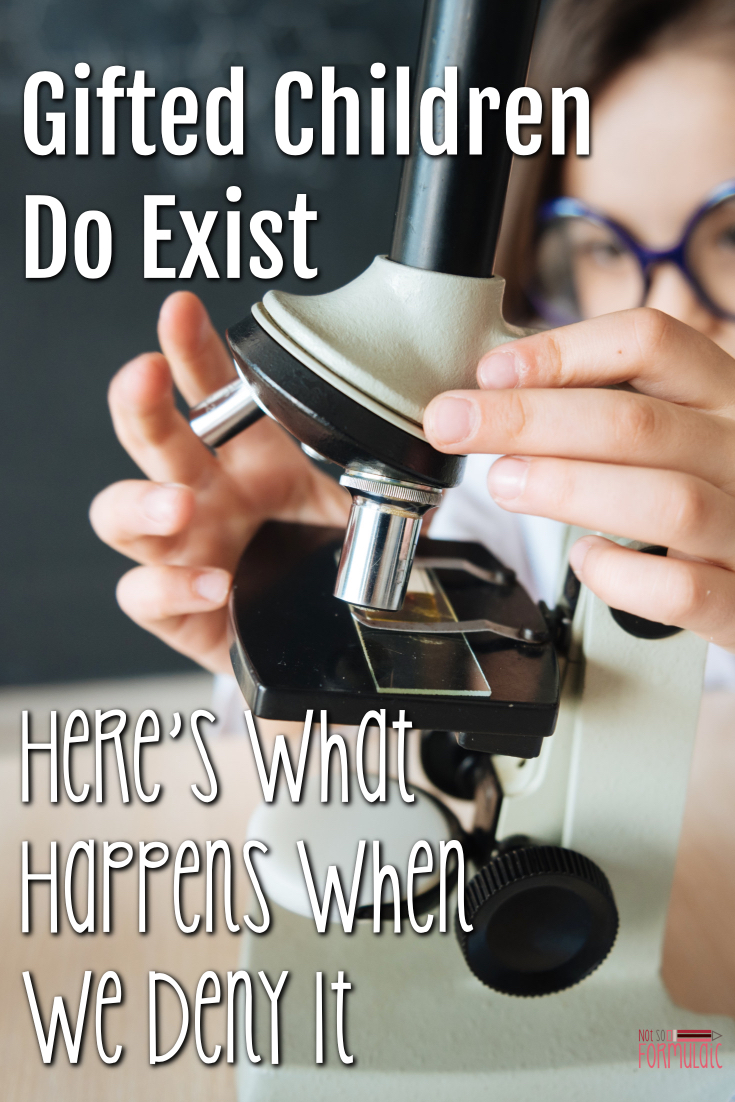 So what happens when we believe there is no such thing as giftedness?

Currently, 14 states lack mandated gifted programs. Of those 14, only 5 have partial funding for the programs they do have. 9 states have mandated programs, but absolutely no funding. That’s roughly half the nation without necessary gifted resources, a number with the potential to grow.

With a decrease in funding comes a decrease in services, and not just special programs for the academically advanced. I’m referring to services which serve the twice-exceptional population, gifted students with comorbid diagnoses which prevent curricular access.

Gifted children aren’t naturally motivated. Anecdotally, I’ve seen it in my own children and in the gifted children I had the privilege to teach. They tend to hyper-focus on a few areas of specialization, and when they are left to their own devices, they don’t fit the standard definition of achievement. This study puts credence to my observation: of 153 gifted high school students surveyed, 32% were identified as underachievers, graduating with a grade point average below 3.0.

Gifted kids are different. They think, relate, and communicate differently, and for the most part, they are glaringly aware of that fact. If their difference is ignored in the classroom, there is a potential for social and emotional distress. Heightened rates of anxiety and depression accompany feelings of isolation; increased boredom leads to behavior problems and academic malaise.

Difficulty with Self Care and Executive Functioning

I knew my oldest daughter was gifted when she refused food, naps, and bathroom breaks at two. Not because she was being obstinant, but because she was intensely focused on building detailed replicas of environmental biomes out of playdoh –  after watching one episode of Dinosaur Train.

Gifted children are born with efficient wiring. That doesn’t mean they’re born with self-ordering skills. Asynchronous development lends itself to absent-minded professor tendencies. They must be taught hygiene and executive functioning.

Those of us who advocate for the gifted aren’t doing so because we believe they are superior.

It’s quite the opposite, really: the potential for academic or intellectual greatness is simply that – potential. Giftedness doesn’t come with drive or stick-to-itiveness. It comes with efficiency.

Far too often, that efficiency comes with pain.

Why Gifted Kids are Anxious, Plus 4 Ways to Help Them Cope

I’m Not Bragging When I Say My Child is Gifted