I’m a BookShark Ambassador. I really do love their products and would share about it even if I weren’t. Please read my disclosure policy for details.

Living with my girls is a bit like raising Emily Dickinson. Except instead of finding poetry stuffed under the beds and stashed in drawers around our living space, I’m finding artwork.

Art is my daughters’ preferred medium. It’s the way they express their feelings, share ideas with other people, and show me what they have learned. But what I love the most about their artistic endeavors is the way it has spilled over into other disciplines. Take science, for instance – something most people wouldn’t connect with art. 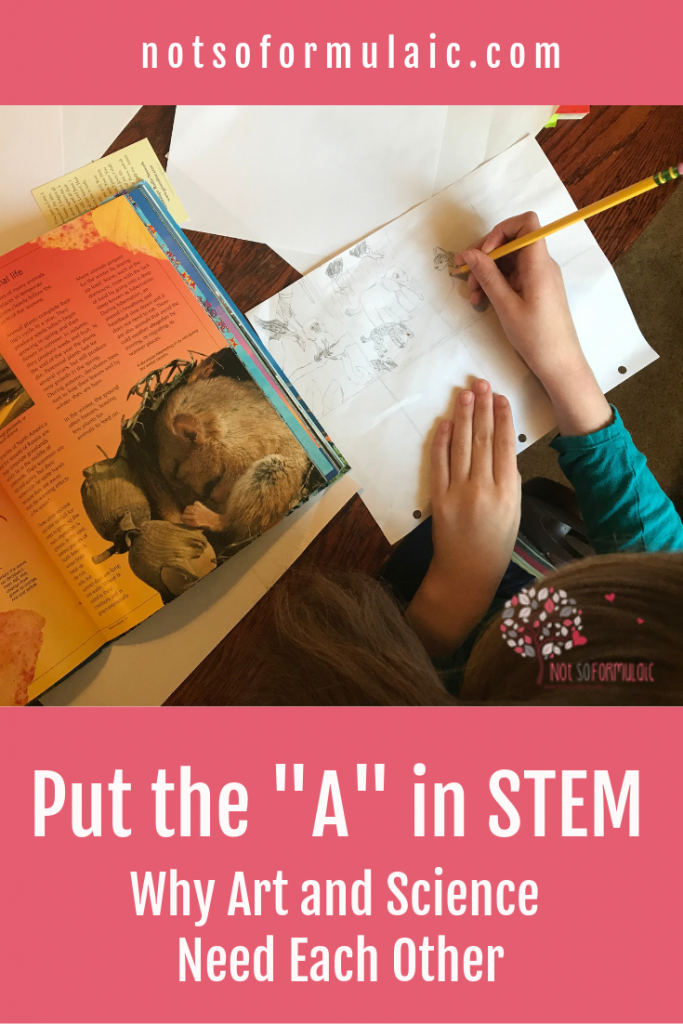 Putting the A in STEM

There’s a modern misconception that separates the sciences from the world of artistic endeavor. It holds that the two are diametrically opposed. Those who hold to this theory believe one cannot be both a researcher and a creative.

This is an assertion history patently rejects.

Hildegard of Bingen, just to name a few.

In fact, those three were some of the foremost scientists of their time.

Our contemporary attitudes regarding the arts and sciences leave out something DaVinci and his compatriots understood. Three distinct elements not only exist in the process of both art and scientific discovery, but they also depend upon one another.

These elements are creativity, inquiry, and a desire to make sense of the unknown.

Why Art Matters to Science

According to Dr. Christopher Suigal (researcher and medical professional at the UCLA Cancer Center), creativity is essential to research. Scientific answers, he says, come from places most people wouldn’t anticipate. Just as an artist views the world from a unique, original perspective, so must a scientist view the data in front of her in order to come to the appropriate conclusion.

Both scientists and artists have an innate desire to discover “more.” They have a tendency to head down rabbit trails to uncover the truth of a specific situation, then express that truth in a way others can understand.

Making Sense of the Unknown

Humanity dislikes chaos and uncertainty. Rather, “we crave order. We crave predictability,” said Dave Featherstone, the late University of Illinois (Chicago) professor of Biology and Neuroscience. Artists and scientists alike take the world of the unknown and make it more accessible. They help us to see that which is predictable in a world that often seems out of sync.

Fortunately, I have a science curriculum that lends itself toward this end.

BookShark Science: Putting the A in STEM

We’re on our second year with literature-based BookShark, a collection of resources that have been the perfect option for my creative kids.

After we read about tectonic plates and volcanoes, my oldest painted a watercolor version of a volcano, photographed it, and labeled the parts in an editing program.

Her younger sister and brother joined in the fun and made volcanoes from modeling clay. We had to fill them with baking soda and vinegar, of course.

When my eight-year-old was studying paramecium, the girls were inspired to create paramecium stuffies out of felt:

My eldest’s study of climates and biomes inspired this graphic novel-esque work in progress. She’s illustrating the differences between a number of different biomes, including weather, flora, and fauna.

Art and science aren’t in opposition to one another.

In fact, they depend on one another to survive. Every corner of my home might be filled with sketches, paintings, and tiny clay creations, but I’m thrilled they have the desire to combine their art with what they learn.

Learning Across the Curriculum with BookShark Science

Homeschooling the Differently Wired: 4 Benefits for Gifted Children with OCD